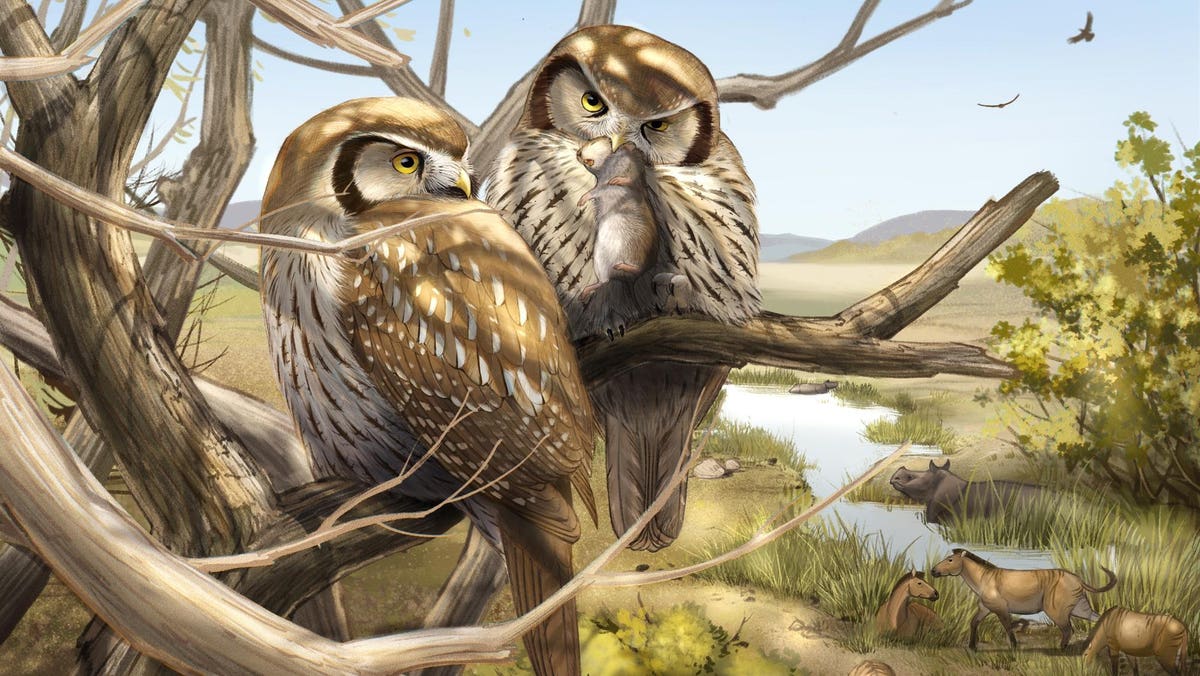 An exquisitely preserved fossil skeleton of a long-extinct owl unearthed in the Tibetan Plateau reveals this species hunted by day, marking a dramatic shift in our understanding of owl evolution

A team of scientists based in China report they have found a remarkably well-preserved fossil skeleton of an extinct owl that lived more than six million years ago during the Late Miocene Epoch in China. They unearthed the fossil in the Linxia Basin of China’s Gansu province, at the edge of the Tibetan Plateau at an elevation of nearly 2,100 meters (7,000 feet).

The team named this new-to-science owl species Miosurnia diurna in recognition of its close living relative, the Northern Hawk Owl, Surnia ulula, a medium-sized species that is active during the day.

The fossil skeleton was very nearly complete, and included body parts that rarely fossilize like the bones of the tongue apparatus (the hyoid), along with the trachea (!), the kneecap, and even tendons (!) for wing and leg muscle attachments. Amazingly, the fossil also featured visible remnants of the owl’s last meal of a small mammal (Figure 1).

I contacted lead author, Zhiheng Li, by email and received a response to my questions that was composed by both Dr Li and the study’s second author, Thomas Stidham. Both scientists are vertebrate paleontologists and professors with the Institute of Vertebrate Paleontology and Paleoanthropology (IVPP) of the Chinese Academy of Sciences, where they study the evolution of birds from their dinosaurian origins up through modern birds. They frequently work together on research projects such as this one.

The most remarkable feature of this fossil is its spectacular state of preservation, which allowed Dr Li and Dr Stidham to determine that this owl was active during the day.

“We studied the fossilized eye bones called scleral ossicles that are preserved in the eye socket of the skull in this owl in order to determine that it was diurnal”, Dr Li and Dr Stidham explained in email (Figure 2).

Scleral ossicles are a group of small bones that form an overlapping ring embedded in the eye of birds, reptiles and other non-mammalian vertebrates, that surround the pupil and iris. Nocturnal animals require larger eyes and bigger pupils to see in low-light conditions, whereas diurnal animals have smaller eyes and pupils, and this pupillary size difference is reflected by the scleral ossicles.

Since the soft parts of the eyes decayed long ago, the small trapezoidal scleral ossicles randomly collapsed into the owl’s eye socket. So Dr Li, Dr Stidham and their collaborators measured each individual bone (there are 16 in total for this species) and, using the magic of geometry, they digitally reconstructed the size and shape of the bony ring surrounding the iris and pupil.

Dr Li, Dr Stidham and their collaborators’ reconstruction are built on extensive research on the structure of eye bones, including work on hundreds of species of birds, dinosaurs, and lizards that are active either at night or during the day that have been previously published by different scientists. In short, it is well-documented that the shape and size of the scleral ossicles correlates very well to the time of activity of animals across all groups, and shows that the eye is quite evolutionarily flexible in these respects.

After the eye bones were digitally reassembled, the team conducted detailed statistical analyses, comparing the fossil owl’s scleral ossicles with those of 55 species of reptiles and more than 360 species of birds, including many owls. The size and shape of the fossil owl’s eye and its relatively smaller opening for light was consistent with the eyes of living owls in the Surniini group, which is mostly diurnal (Figure 4).

“We reconstructed the shape and size of the original eye ring in the fossil using measurements from the individual bones”, Dr Li and Dr Stidham explained in email. “We actually built three slightly different [statistical] models that allowed for some error in the reconstruction, but the results from all three were the same (the diurnal probability was over 60%). When we statistically analyzed the reconstructed bony eye ring of the extinct owl as compared to those hundreds of previously studied species (active at all different times of day or night), the result clearly grouped the fossil with known living diurnal species.”

Many morphological structures of the fossil skull and skeleton, including a distinctive bump on part of the cheekbone just behind the eye, are also shared with other members of the global owl group Surniini.

But what does behavior show? Although it’s not possible to directly observe this ancient owl’s activity patterns, it is possible to infer what those patterns could have been by looking at what its closest living descendants are doing. Are they also diurnal?

To answer this question, the research team used a statistical method known as Ancestral State Reconstruction to examine the evolution of avian behavior as being night or daytime active.

“This part did not include any eye measurements, just observations of living bird behavior”, Dr Li and Dr Stidham elaborated in email. “When we mapped those activity patterns on the family tree of birds, using hundreds of species, we could see that the ancestral owl [that gave rise to all owls] was most likely nocturnal, but again we found that the group called Surniini, which includes our extinct species, had switched away from nocturnal behavior. So we have both evidence from the eye shape and size and from the Ancestral State Reconstruction telling us the same thing: this group of owls left their ancestral nighttime activities behind millions of years ago.”

What made you happiest about this discovery?

“[I]t is always a great feeling when you make such a discovery that has the ability to change what people, including scientists, think about a topic”, Dr Li and Dr Stidham replied in email. “We now have many new questions to study about how owls re-evolved to be active during the day by studying things like their retinas, feathers, and other features impacted by the evolutionary change in their behaviors. Opening new pathways for scientific study always makes you feel good.”

“This fossil skeleton turns what we thought we knew about the evolution of owls on its head.”