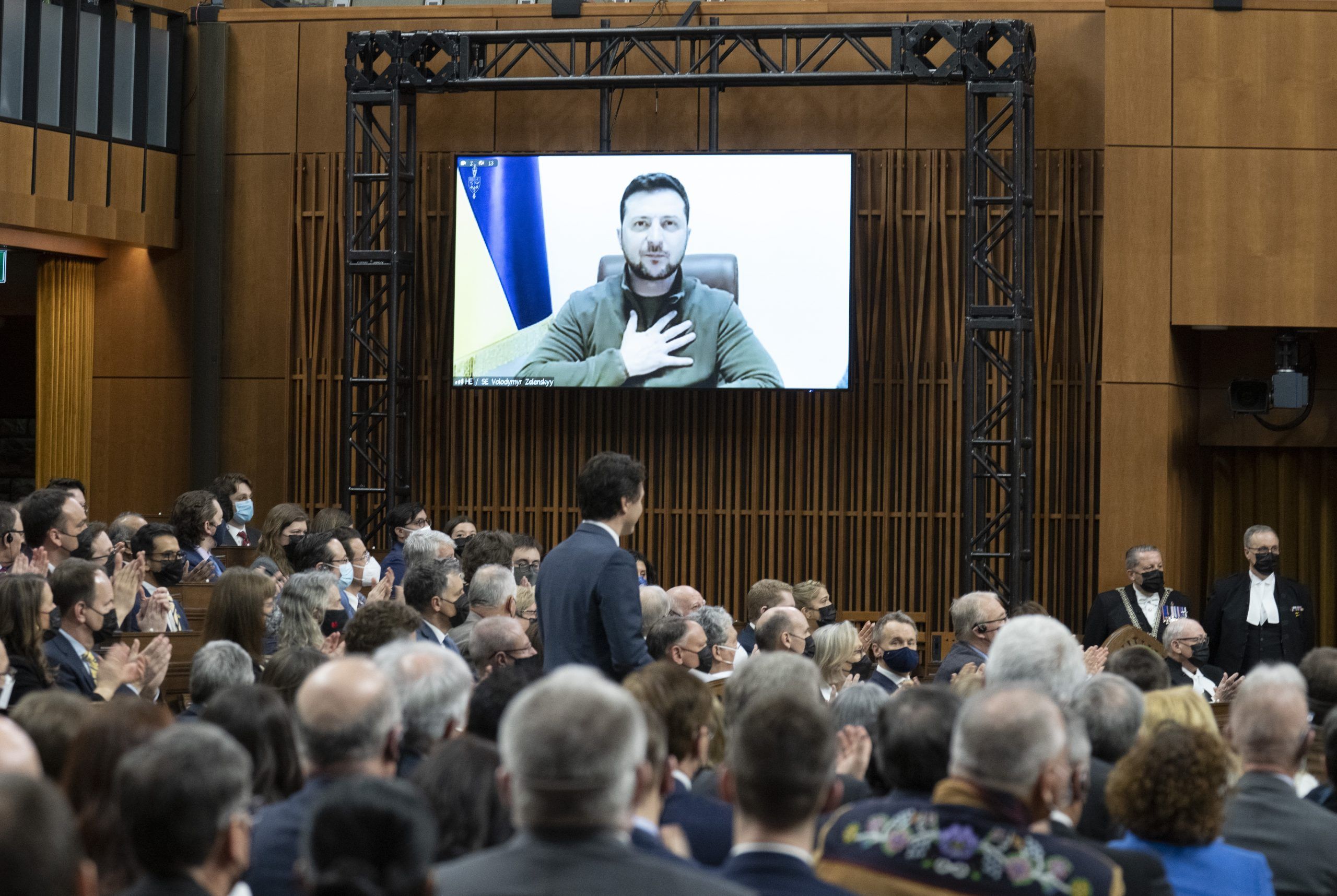 First Reading is a daily newsletter keeping you posted on the travails of Canadian politicos, all curated by the National Post’s own Tristin Hopper. To get an early version sent direct to your inbox every Monday to Thursday at 6 p.m. ET (and 9 a.m. on Saturdays), sign up here.

Ukrainian President Volodymyr Zelenskyy has been particularly nice to Canada throughout his country’s invasion by Russia. While he’s accused the wider world of “losing humanity” in its limited aid to Ukraine, Zelenskyy has persistently referred to Canada (and Prime Minister Justin Trudeau specifically) as a “friend.” Notably, his Tuesday address to the House of Commons was only his third address to a foreign parliament since the invasion.

So the National Post’s John Ivison found it all a little distasteful that the House of Commons was prepared to chant “Slava Ukraini” at the Ukrainian president without really changing any of the above points. “We have become a nation of sanctimonious free riders — helpless to act, save making the world safe for hypocrisy,” he wrote.

After Zelenskyy’s speech to the House of Commons, MPs did engage in a bit of a discussion on how Western air power might be used to protest Ukraine, to which Foreign Affairs Minister Mélanie Joly responded “the objective is to not to declare an international conflict, a third world war … we have a red line that we can’t cross.”

As Ukrainian refugees trickle into Canada, Quebec has warned them that their children better be prepared to learn French. For years, the rule in Quebec has been that foreign arrivals must enroll their children in French-language schools (there are English schools, but only for “historic” Anglophones). The Quebec English School Boards Association pressed for an exemption on Ukrainians, on the reasoning that many of them speak English instead of French. No dice; as one government spokesperson put it, “there’s no question of authorizing English schooling for these refugees.”

Canadians are one of the most well-represented nationalities among foreign fighters in Ukraine. A spokesperson for the International Legion of Territorial Defence of Ukraine recently told CTV that only the United States and Britain had more fighters in their ranks.

There are those Conservatives who lament the increasingly vicious state of their party’s leadership race. The usual line is that when Tories fight amongst themselves, the chief beneficiary is Justin Trudeau. But the National Post’s Chris Selley thinks the Conservatives would probably be well-served by a rancorous drawn-out purgative internecine fight. For one, Canadian conservative parties have a weird habit of electing leaders who piously pledge themselves to fight the culture wars, before immediately throwing all of that under a “fleet of buses” once they’re in charge.

Frontrunner Pierre Poilievre sat down for a really, really long interview with Maclean’s recently. Political watchers have noted that it’s pretty light on the usual pre-scripted talking points that typically infect magazine profiles of this kind. Some highlights …

It’s always been a little weird that the Conservative Party of Canada is such a loud supporter of supply management, Canada’s system of state-backed agricultural cartels that isn’t very conservative at all. And it looks like Tory support for supply management is going to survive yet another leadership race. Poilievre told the Western Standard that he has no qualms with supply management. And Jean Charest absolutely loves the system.

We try to remain politically neutral here at First Reading, but we are forced to make an exception when it comes to Canada’s continued adherence to twice-yearly clock changes, the dumbest, most wasteful, and most unnecessary piece of public policy ever devised. So we must look with envy upon the Americans, whose Senate just passed a bill that would compel the United States to observe permanent Daylight Time; all the evening sunshine you’ve learned to love, but without the government-mandated jet lag from switching your clocks.

The Canadian travel sector has been telling Ottawa for months that its policy of forcibly testing vaccinated travellers at the border makes no epidemiological sense, is out of step with most of the world, and is utterly destroying them economically. So the federal government is finally lifting the policy … in two weeks.