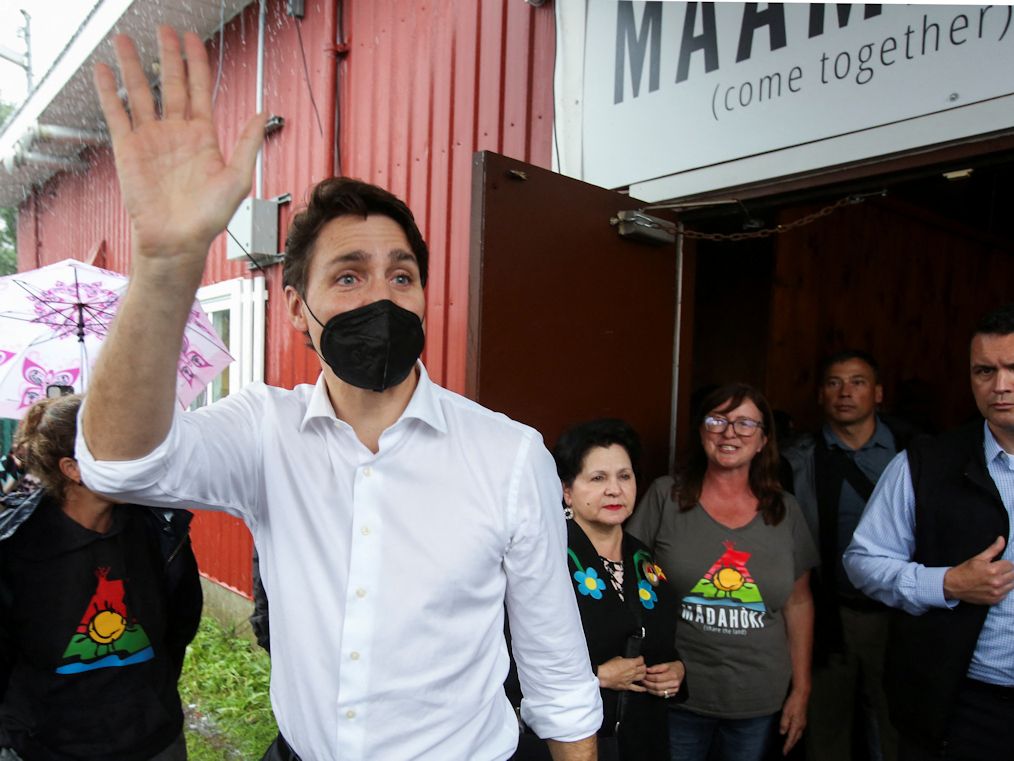 First Reading is a daily newsletter keeping you posted on the travails of Canadian politicos, all curated by the National Post’s own Tristin Hopper. To get an early version sent direct to your inbox every Monday to Thursday at 6:30 p.m. ET (and 9 a.m. on Saturdays), sign up here.

He has an increasingly defiant caucus, his approval numbers have been in the toilet for years and the very arc of history decrees that he can never win another election.

It’s why Ottawa watchers are beginning to speculate that Prime Minister Justin Trudeau seems to be acting like a political leader who knows his days are numbered.

Former NDP leader Tom Mulcair — who once faced Trudeau in the opposition benches — wrote in a recent CTV column that the Liberals seemed to be infected by a “whole-of-government approach to incompetence” indicative of a PMO that has effectively given up.

“Red lights are blinking across the Privy Council Office dashboard, but no one is in charge,” wrote Mulcair, putting the blame in part on the recent NDP deal to keep Trudeau’s government in power until at least 2025. “The writing was on the wall … no one was going to be holding him to account,” he wrote.

Longtime pundit Chantal Hébert received an avalanche of Liberal scorn this week for a similar column claiming that Trudeau was exhibiting “systemic nonchalance” that seemed to belie a government who knows the end is nigh. Hébert too, identified the deal with Jagmeet Singh’s NDP as the beginning of the end.

“Instead of giving Trudeau’s team a second wind, the striking of a co-operation agreement with the NDP last March seems to have given it a licence for inertia,” she wrote.

Don Martin, another veteran Canadian political pundit, felt confident to declare Trudeau a lame duck after a quick canvas of his usual Liberal contacts. “He’s too woke, too precious, preachy in tone, exceedingly smug, lacking in leadership, fading in celebrity, slow to act, short-sighted in vision and generally getting more irritating with every breathlessly whispered public pronouncement,” was how he summed up their sentiment.

For at least the last 50 years, any long-serving Canadian prime minister inevitably reaches a stage where they’re reduced to going through the motions until an external force eventually topples them from power.

Brian Mulroney’s popularity plummeted so sharply in the months before his 1993 resignation that he could barely go out in public without confronting protests. The last years of Jean Chrétien were defined by a spat of Liberal infighting so vicious that it has its own Wikipedia page.

Trudeau, too, has been facing an increasingly unruly caucus. Liberal MP Nate Erskine-Smith is one of several to come out publicly against the government’s COVID restrictions in recent months, while others are phoning up the Hill Times to complain that a “massive majority” of Liberal MPs feel similarly.

Trudeau has been steadily bleeding political capital for years. The “Trudeau Tracker” maintained by the Angus Reid Institute shows that the prime minister hasn’t experienced a sustained period of net public approval since 2017.

Aside from a few brief periods during COVID (at the pandemic’s outset and after the Liberals had secured sufficient shots for mass vaccination), Trudeau has spent most of the last five years governing a country where the majority of citizens hate him.

As of the last count, 57 per cent of Canadians disapproved of his performance, against just 39 per cent who approved.

His 2021 re-election win made history as the country’s slimmest-ever electoral victory; Trudeau kept the Prime Minister’s Office with just 32.6 per cent of the popular vote.

It was his third electoral victory since coming to power in 2015. In more than 100 years of Canadian federal politics, three election victories in a row is the expiry date for even the most popular of prime ministers.

Only two Canadians have ever managed four consecutive wins, and both of them were such political titans that they both found their way onto the currency: Sir John A. Macdonald and Wilfrid Laurier. The pair also benefited from smaller and more homogenous electorates; Laurier won his last majority in 1908 with only 570,311 total votes.

Macleans’ Aaron Wherry wrote an entire book on Trudeau, and in a recent Twitter thread he noted the virtual impossibility of the prime minister thinking he could buck Ottawa’s time-tested “three and done” trend.

“It’s under-appreciated that Trudeau is already in rare company for having won three elections,” he wrote.

On the other hand, here’s the complete list of federal party leaders to lead their parties to four *consecutive* election victories:

The funerals from Canada’s worst-ever mass shooting were still ongoing when the Trudeau government apparently intervened in the investigation as a way to “leverage” their push for tightened federal gun control. An investigation by the Halifax Examiner found that RCMP Commissioner Brenda Lucki tried to pressure her own investigators to release details of the firearms used in the massacre in order to honour a “promise” she made to Public Safety Minister Bill Blair that the information would be released in time to coincide with the announcement of a federal ban on “assault-style” firearms.

The story is particularly scandalous for the fact that Nova Scotia RCMP warned Lucki that such information might jeopardize the search for how the killer had obtained his murder weapons – and they were dressed-down for talking back. “She did not raise her voice but her choice of words was indicative of her overall dissatisfaction with our work,” wrote Nova Scotia Supt. Darren Campbell in a note obtained by the Examiner.

(And a side note that the RCMP investigation into the source of the weapons does indeed appear to have been mysteriously compromised. The Nova Scotia killer obtained all of his guns illegally, including one smuggled in from the United States. Despite investigators knowing who sold him the firearms, nobody has been charged).

André Boisclair, a leader of the Parti Québécois during the mid-2000s, pleaded guilty on Monday to two counts of sexual assault. One of his alleged victims, whose name is protected by a publication ban, has told police that Boisclair appeared to be “completely crazy” during their 2014 encounter, and ordered two people to rape him while high on drugs.

Conservative leadership frontrunner Pierre Poilievre has promised that if he ever becomes prime minister he will appoint a “Free Speech Guardian” to force universities to appropriately observe free speech (i.e.: not cancelling conservative speakers or firing professors for controversial tweets). Canadian campuses do indeed have a problem with silencing voices that don’t fit within an increasingly narrow Overton window, but you can still point out the irony of Pierre “Small Government Fire-the-Gatekeepers” Poilievre promising to appoint a gatekeeper on a federal salary.