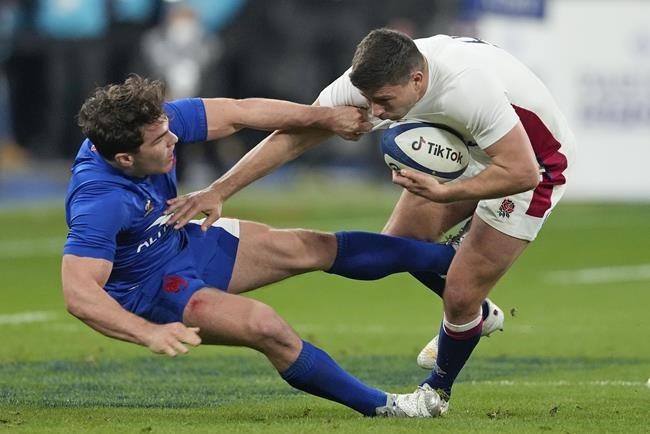 PARIS (AP) — The French rugby renaissance has reached the next stage: Les Tricolores are the kings of Europe once again. France won the Six Nations for the first time in 12 years after beating England 25-13 to complete the Grand Slam on Saturday.

PARIS (AP) — The French rugby renaissance has reached the next stage: Les Tricolores are the kings of Europe once again.

France won the Six Nations for the first time in 12 years after beating England 25-13 to complete the Grand Slam on Saturday.

And it was achieved in a febrile atmosphere at the Stade de France, the venue in northern Paris where the French will look to win sport’s ultimate prize next year: The Rugby World Cup.

France scored three tries, none more important than the final one scored in the 61st minute by Antoine Dupont — the world player of 2021 — that pushed his team back into a 12-point lead after England reduced the gap to 18-13 following a fast start to the second half.

It eased the pressure on the French in the final quarter as they clinched their first piece of rugby silverware since the Six Nations in 2010 to the backdrop of the home fans singing “La Marseillaise.”

It was a sixth title of the Six Nations era (since 2000) for France, and a record-tying fourth Grand Slam in that period.

And it marked the next step in France’s evolution under coach Fabien Galthie, who took over after the 2019 Rugby World Cup and led the team to second-place finishes in the last two years.

A big win over the All Blacks in November gave the French the favorite’s tag heading into the Six Nations and they embraced it, with the win over England seeing them finish a point above Ireland.

The English finished third, an improvement on last year’s fifth place but one unlikely to ease the pressure on coach Eddie Jones after a second straight championship in which they lost three games.

A spectacular, spine-tingling pre-match light show saw the Stade de France illuminated in red, white and blue, setting the stage for a huge match in the progress of Galthie’s France.

They rose to the challenge.

With remarkable ruck speed and a feisty defense — orchestrated by an English coach, Shaun Edwards — that created five turnovers, France produced a strong first-half display to lay the platform for victory.

Fullback Melvyn Jaminet had already kicked a penalty by the time Romain Ntamack sent a miss-pass over to the right wing where Gael Fickou collected the ball and raced over in the corner for a 15th-minute try.

While finding parity at the lineout, England was getting dominated at the scrum and its attack was limited, resorting to getting most joy from high kicks fielded by Freddie Steward, a tall fullback being deployed as a winger.

A couple of penalties by Marcus Smith kept the English in touch but a converted try by Francois Cros off the last attack of the first half opened up a 12-point gap — at 18-6 — that the visitors never looked like closing.

It was another clinic in quick phases, marshalled by Dupont, that ended with Ntamack bursting through a gap to almost reach the line before Cros picked up and stretched out a hand through a mass of bodies to ground.

England made the French work for the title, producing a barnstorming start to the second half that culminated in Steward finishing off a well-worked move in the right corner for what proved to be the team’s only try.

But Dupont ensured there would be no late nerves, running onto Gregory Alldritt’s pop-up pass and handing off England hooker Jamie George before accelerating away from Ben Youngs to score beside the posts.

Jaminet’s conversion took him to 10 points for the match and France wouldn’t be stopped.