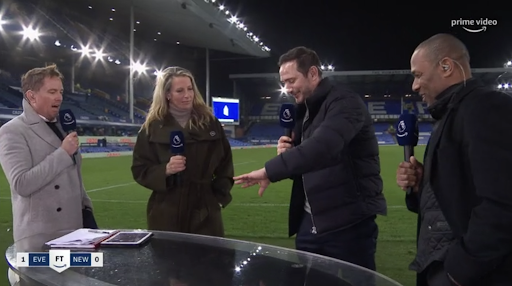 Frank Lampard has revealed he broke his hand in the melee of celebrating Everton’s crucial win against Newcastle.

The Toffees were handed a huge boost in their survival bid as Alex Iwobi netted in the ninth minute of stoppage-time to secure them a 1-0 win at Goodison Park.

The match also saw a lengthy delay as a man tied himself to one of the goal posts at the Gwladys Street End.

It appeared Everton were going to have to settle for a point at best when midfielder Allan was sent off for a challenge on Allan Saint-Maximin.

But Iwobi had other ideas as he slotted the ball home with his left peg, sending the Everton faithful into pandemonium with Lampard picking up an injury while having his ‘out of body experience’, as talkSPORT’s Jamie O’Hara put it.

“I’ve broken my hand in the celebrations for the goal,” Lampard told Amazon Prime. “It’s a bit sore a bit shaky, but I don’t care.”

He added: “It’s an amazing night and we need those nights. It’s important that we know what got us that win and that’s spirit.

“It was a tough game against a very good team. It wasn’t a night for quality, it was about fight and we showed that.”

talkSPORT’s Jason Cundy added: “You thought the best Everton were going to get was a point. You’d think they’d take a draw…