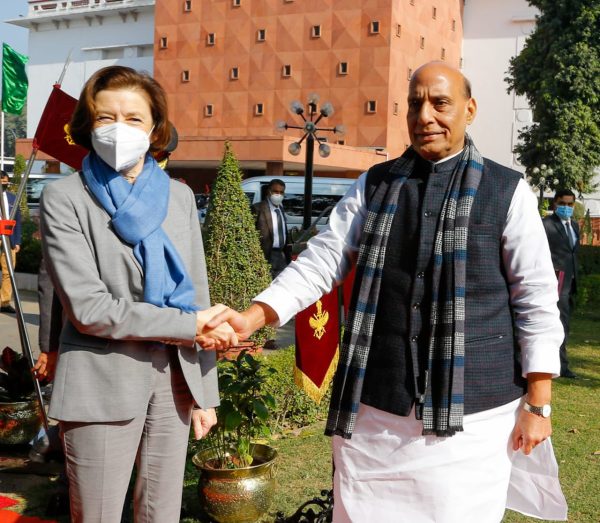 French Defense Minister Florence Parly was in New Delhi last week for the third annual defense dialogue between India and France. Parly and Indian Defense Minister Rajnath Singh discussed a range of bilateral, regional, and defense issues, including bilateral defense industry collaboration and co-production of defense platforms. The two ministers also reviewed the continuing military-to-military cooperation, which has seen a spike despite the pandemic challenges. In addition, the two ministers agreed to strengthen cooperation at multiple levels, especially at regional and multilateral forums. This is significant given that France is currently the chair of the Indian Ocean Naval Symposium and will take over the European Union Presidency from January 2022.

The French Embassy in India, in a statement, said that “the visit highlights France’s engagement in the Indo-Pacific and the centrality of India in the French strategy.” The statement also highlighted the number of India-France military engagements even in the midst of the pandemic – Desert Knight 21 in January, Varuna in April, and Shakti in November. Interestingly, the statement mentioned a commitment to uphold rule of law while “rejecting all forms of hegemony,” which could be seen as aimed at China.

Signifying the level of trust, confidence and comradery, the French minister also met with the Indian Prime Minister Narendra Modi and the National Security Adviser Ajit Doval.  Modi tweeted to say that the two sides had a wide-ranging conversation including bilateral defense cooperation, developments in the Indo-Pacific and the French presidency of the EU.  Traditionally, India and France have cooperated on a number of strategic areas including defense, space and civil nuclear sectors but the two have expanded their engagement in a number of other critical areas such as the evolving strategic dynamics in the Indo-Pacific, artificial intelligence, supercomputing, cyber security and space security.

France became the latest of the three countries with which India has a space security dialogue, after the United States and Japan. While India and France have had civil space cooperation for several decades, they also share concerns about the changing space security dynamics. As the minister explained, the “goal is to share threat assessments, coordinate our response strategies, and jointly promote international norms to ensure a free and secure space. We build satellites together, it’s only natural to also work together on protecting them.”

The India-France commitment to and convergence on areas like promoting multilateralism and ensuring a rules-based international order are also important in the bilateral relationship between India and France. In an interview, Parly emphasized that new arrangements like AUKUS do not change geography, and that France is an Indo-Pacific nation. She went on to reiterate the importance of India in France’s Indo-Pacific strategy, adding that “our armed forces have reached new levels of interoperability, with major air, navy, and army exercises this year.”

The minister also acknowledged concerns about China but added that “it’s a delicate balance that must be found. China is a major country, there are areas where cooperation can be envisaged and developed.” The minister suggested the useful and important role that China could play in addressing the climate change challenge and in implementing its commitments made at the Paris climate change meet, as well as trade and commerce.  Nevertheless, Parly was quick to characterize China’s actions in the South China Sea as becoming “more and more aggressive.”

On defense industrial collaboration, which was the main agenda for the French minister’s visit, Singh reportedly told his counterpart that either the French companies should “collaborate with Indian companies or simply produce in India.” Parly said that France is ready to assist India on its requirement for additional Rafale fighter jets while working with India to strengthen the “Make in India” initiative by incorporating Indian manufacturers into the broader global supply chains.

Meanwhile, France has already been participating in India’s “Make in India” initiative in the defense sector such as in submarines. Speaking at a security forum in India, Parly further stated that “We are ready to answer any additional needs or requests that could be made by India. We know that an aircraft carrier will soon be delivered. Aircraft are needed.” India’s newest aircraft carrier, INS Vikrant, an indigenously built one, is to be operational in August 2022. India has already purchased 36 Rafale fighter jets for the Indian Air Force in flyaway condition, of which 33 have been delivered to India and the remaining three are to be delivered in early 2022.

The European Union’s approach to the Indo-Pacific under French presidency is also of interest to India. Parly promised that the EU would remain India’s “natural partner” given the Indian and French affection for concepts like strategic autonomy. She went on to say that EU will augment its engagement with the Indo-Pacific, and engage in “enhanced naval presence to tangible solutions for connectivity, environment protection, and health.” India is meant to play a key role in actualizing this action-oriented agenda and will be part of an Indo-Pacific Ministerial Forum to be held in February 2022.

France has continued to remain one of India’s trusted strategic partners, with cooperation extending across many issues. France’s role in India’s capacity development in addressing the emerging threats from China is real given its material stake in the region. Following the Galwan clash and the continuing adversarial India-China ties, India and France can be expected to bolster their security and strategic engagements in the coming years with a greater sense of purpose. Unlike the U.S., France has no negative historical baggage in India’s strategic history and hence, New Delhi’s ability to push forward closer strategic engagements will only bring it more political benefits.