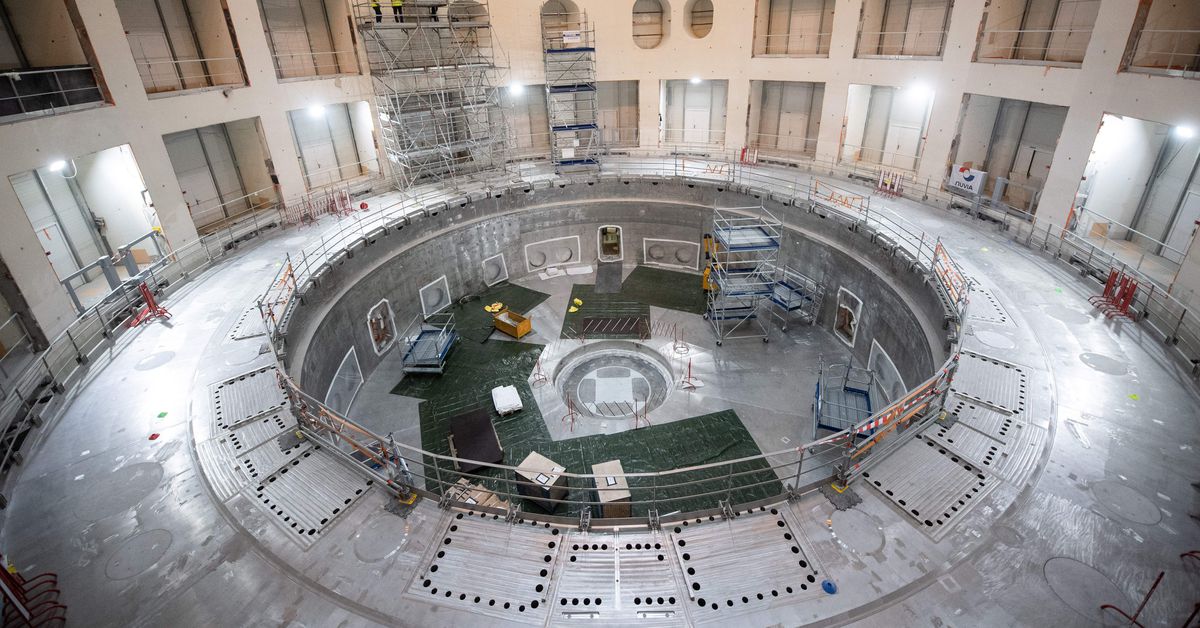 Fusion energy is perhaps the longest of long shots. To build a fusion reactor is essentially to create an artificial star. Scientists have been studying the physics of fusion for a century and working to harness the process for decades. Yet almost every time researchers make an advance, the goal posts seem to recede even farther in the distance.

Still, the enormous potential of fusion makes it hard to ignore. It’s a technology that could safely provide an immense and steady torrent of electricity, harnessing abundant fuel made from seawater to ignite the same reaction that powers the sun. It would produce no greenhouse gases and minimal waste compared to conventional energy sources.

With global average temperatures rising and energy demands growing, the quest for fusion is timelier than ever: It could help solve both these problems at the same time. But despite its promise, fusion is often treated as a scientific curiosity rather than a must-try moonshot — an actual, world-changing solution to a massive problem.

The latest episode of Unexplainable, Vox’s podcast about unsolved mysteries in science, asks scientists about their decades-long pursuit of a star in a bottle. They talk about their recent progress and why fusion energy remains such a challenge. And they make the case not only for continuing fusion research, but aggressively expanding and investing in it — even if it won’t light up the power grid anytime soon.

With some of the most powerful machines ever built, scientists are trying to refine delicate, subatomic mechanics to achieve a pivotal milestone: getting more energy out of a fusion reaction than they put in. Researchers say they are closer than ever.

Nuclear fission is what happens when big atoms like uranium and plutonium split apart and release energy. These reactions powered the very first atomic bombs, and today they power conventional nuclear reactors.

Fusion is even more potent. It’s what happens when the nuclei of small atoms stick together, fusing to create a new element and releasing energy. The most common form is two hydrogen atoms fusing to create helium.

The reason that fusion generates so much energy is that the new element weighs a smidgen less than the sum of its parts. That tiny bit of lost matter is converted into energy according to Albert Einstein’s famous formula, E = mc2. “E” stands for energy and “m” stands for mass.

The last part of the formula is “c,” a constant that measures the speed of light — 300,000 kilometers per second, which is then squared. So there’s an enormous multiplier for matter that’s converted into energy, making fusion an extraordinarily powerful reaction.

These basics are well understood, and researchers are confident that it’s possible to harness it in a useful way, but so far, it’s been elusive.

“It’s a weird thing, because we absolutely know that the fundamental theory works. We’ve seen it demonstrated,” said Carolyn Kuranz, a plasma physicist at the University of Michigan. “But trying to do it in a lab has provided us a lot of challenges.”

For a demonstration, one only has to look up at the sun during the day (but not directly, because you’ll hurt your eyes). Even from 93 million miles away, our nearest star generates enough energy to heat up the Earth through the vacuum of space.

But the sun has an advantage that we don’t have here on Earth: It is very, very big. One of the difficulties with fusion is that atomic nuclei — the positively charged cores of atoms — normally repel each other. To overcome that repulsion and spark fusion, you have to get the atoms moving really fast in a confined space, which makes collisions more likely.

A star like the sun, which is about 333,000 times the mass of Earth, generates gravity that accelerates atoms toward its center — heating them up, confining them, and igniting fusion. The fusion reactions then provide the energy to speed up other atomic nuclei and trigger even more fusion reactions.

What makes fusion energy so tricky

Imitating the sun on Earth is a tall order. Humans have been able to trigger fusion, but in ways that are uncontrolled, like in thermonuclear weapons (sometimes called hydrogen bombs). Fusion has also been demonstrated in laboratories, but under conditions that consume far more energy than the reaction produces. The reaction generally requires creating a high-energy state of matter known as plasma, which has quirks and behaviors that scientists are still trying to understand.

To make fusion useful, scientists need to trigger it in a controlled way that yields far more energy than they put in. That energy can then be used to boil water, spin a turbine, and generate electricity. Teams around the world are studying different ways to accomplish this, but the approaches tend to fall into two broad categories.

One involves using magnets to contain the plasma. This is the approach used by ITER, the world’s largest fusion project, currently under construction in southern France.

The other category involves confining the fusion fuel and compressing it in a tiny space with the aid of lasers. This is the approach used by the National Ignition Facility (NIF) at Lawrence Livermore National Laboratory in California.

Replicating a star requires doing this research at massive scales, so fusion experiments often involve the most powerful scientific instruments ever built. ITER’s central solenoid, for example, can generate a magnetic force strong enough to hoist an aircraft carrier 6 feet out of the water.

Building hardware to withstand these extreme conditions is its own scientific and engineering challenge. Managing such massive experiments has also been a struggle. ITER started with an initial cost estimate of 6.6 billion euros, which has since more than tripled. It began construction in 2007 and its first experiments are set to begin in 2025.

An upside to the intricacy of fusion reactions is that it is almost impossible to cause a runaway reaction or meltdown of the sort that have devastated fission power plants like Chernobyl. If a fusion reactor is disrupted, the reaction rapidly fizzles out. In addition, the main “waste” product of hydrogen fusion is helium, an inert gas. The process can induce some reactor materials to become radioactive, but the radioactivity is much lower, and the quantity of hazardous waste is far smaller, compared to conventional nuclear power plants. So nuclear fusion energy could become one of the safest sources of electricity.

For policymakers, investing in an expensive research project that may not yield fruit for decades, if at all, is a tough sell. Scientific progress doesn’t always keep up with political timelines: A politician who green-lights a fusion project might not even live to see it become a viable energy source — so they certainly won’t be able to brag about their success by the time that the next election rolls around.

In the United States, funding for fusion research has been erratic over the years and far below the levels government analysts say is needed to make the technology a reality. The US Department of Energy currently spends about $500 million on fusion a year, compared to almost $1 billion on fossil-fuel energy and $2.7 billion on renewables. Investment in fusion seems even tinier next to other major programs like NASA ($23 billion) or the military ($700 billion).

So from its basic physics to government budgets, fusion energy has a lot working against it.

Fusion energy should be treated as a solution, not just an experiment

Working in fusion’s favor, however, are scientists and engineers who think it’s not just possible, but inevitable.

“I’m a true believer. I do think we can solve this problem,” said Troy Carter, a plasma physicist at the University of California Los Angeles. “It will take time, but the real issue is getting the resources brought to bear on these issues.”

Investors are also getting in the game, placing billion-dollar bets on private startup companies developing their own fusion strategies.

The journey toward fusion has yielded benefits for other fields, particularly in plasma physics, which is used extensively in manufacturing semiconductors for electronics. “Plasma processing is one of the things that make your iPhones possible,” said Kathryn McCarthy, a fusion researcher at Oak Ridge National Laboratory.

And despite the hurdles, there have been some real advances. Researchers at NIF reported last summer that they achieved their best results yet — 1.3 megajoules of output from 1.9 megajoules of input — putting them closer than ever to energy-positive fusion. “We’re on the threshold of ignition,” said Tammy Ma, a plasma physicist at NIF.

To break out of its rut, fusion will need to be more than a science experiment. Just as space exploration is more than astronomy, fusion is much more than physics. It should be a leading tool in the fight against the world’s most urgent problems, from climate change to lifting people out of poverty.

Increasing energy access is closely linked to improving health, economic growth, and social stability. Yet close to a billion people still don’t have electricity and many more only have intermittent power, so there is an urgent humanitarian need for more energy.

At the same time, the window for limiting climate change is slamming shut, and electricity and heat production remain the dominant sources of heat-trapping gases in the atmosphere. To meet one of the goals of the Paris climate agreement — limiting warming to less than 1.5 degrees Celsius this century — the world needs to cut greenhouse gas emissions by half or more by 2030, according to the Intergovernmental Panel on Climate Change. Many of the world’s largest greenhouse gas emitters are also aiming to zero out their contributions to climate change by the middle of the century. Making such drastic cuts in emissions means phasing out fossil fuels as quickly as possible and rapidly deploying much cleaner sources of energy.

The technologies of today may not be up to the task of resolving the tension between the need for more energy and the need to reduce carbon dioxide emissions. A problem like climate change is an argument for placing bets on all kinds of far-reaching energy solutions, but fusion may be the technology with the highest upside. And on longer time scales, closer to the 2040s and 2050s, it could be a real solution.

With more investment from governments and the private sector, scientists could potentially speed up their pace of progress and experiment with even more approaches to fusion. In the US, where much of the research is conducted at national laboratories, this would mean convincing your representatives in Congress to get excited about fusion and ultimately spend more money. Lawmakers can also encourage private companies to get into the game by, for example, pricing carbon dioxide emissions to create incentives for clean energy research.

The key, according to Carter, is to ensure that the support for fusion remains steady. “Given the level of importance here and the amount of money invested in energy, the current investment in fusion is a drop in the bucket,” Carter said. “You could imagine ramping it up orders of magnitude to get the job done.”

He added that funding for fusion doesn’t have to cannibalize resources from other clean energy technologies, like wind, solar, and nuclear power. “We need to invest across the board,” Carter said.

Artificial star power might not illuminate the world for decades, but the foundations have to be laid now through research, development, and deployment. It may very well become humanity’s crowning achievement, more than a century in the making.