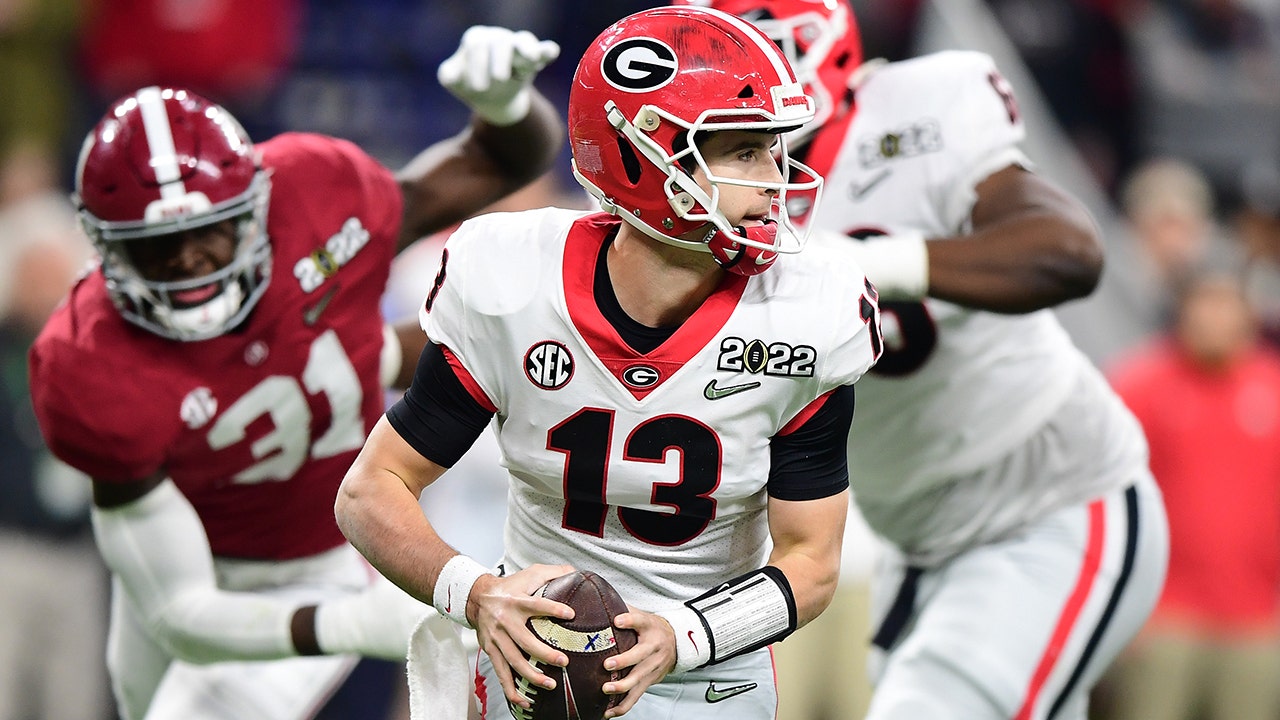 With 3:33 left, Heisman Trophy-winning quarterback Bryce Young would get the ball back to try to force overtime. Young would throw a Pick Six to Kelee Ringo, which would seal the deal.

Bennett finished 17-for-26 with 224 passing yards and two touchdown passes. Mitchell had two catches for 50 yards and Bowers had four catches for 36 yards.

The game was a field goal battle in the first half with Alabama leading 9-6.

The first touchdown of the night game in the third quarter.

Stetson Bennett #13 of the Georgia Bulldogs looks to pass the ball in the first quarter of the game against the Alabama Crimson Tide during the 2022 CFP National Championship Game at Lucas Oil Stadium on January 10, 2022 in Indianapolis, Indiana.
(Emilee Chinn/Getty Images)

Georgia running back James Cook galloped for 67 yards to get the Bulldogs near the goal line. Two players later, Zamir White would run for the 1-yard score.

Georgia’s Zamir White celebrates after running for a touchdown during the second half of the College Football Playoff championship football game against Alabama Monday, Jan. 10, 2022, in Indianapolis. (AP Photo/Paul Sancya)

On the following drive, Young would connect with wide receiver Agiye Hall for 28 yards to setup a 1st and goal from the 5-yard line. However, Alabama would fail to punch it in and settle for their fourth field goal of the game and cut the deficit to 13-12.

The questionable fumble call came in the fourth quarter. Alabama was able to get some pressure on Bennett and it appeared he was able to throw the ball away before he was tackled for a loss.

Alabama’s Cameron Latu reacts after catching a touchdown pass during the second half of the College Football Playoff championship football game against Georgia Monday, Jan. 10, 2022, in Indianapolis.
(AP Photo/Paul Sancya)

After further review, the call on the field stood.

Young would capitalize and throw a touchdown pass to Cameron Latu to go up 18-13.

It would be the last time Alabama scored.

Bennett would show some resiliency and put together a few solid drives that would end in scores. Georgia outscored Alabama 27-9 in the second half.

Young was 35-for-57 with 369 passing yards, a touchdown pass and two interceptions. Brian Robinson Jr. finished with 68 yards on 22 carries. The Crimson Tide offense took a hit when Jameson Williams left with a knee injury and it may have altered the way the offense played down the stretch.

Georgia will finish the season with a 14-1 record and finally getting the big win over Alabama.