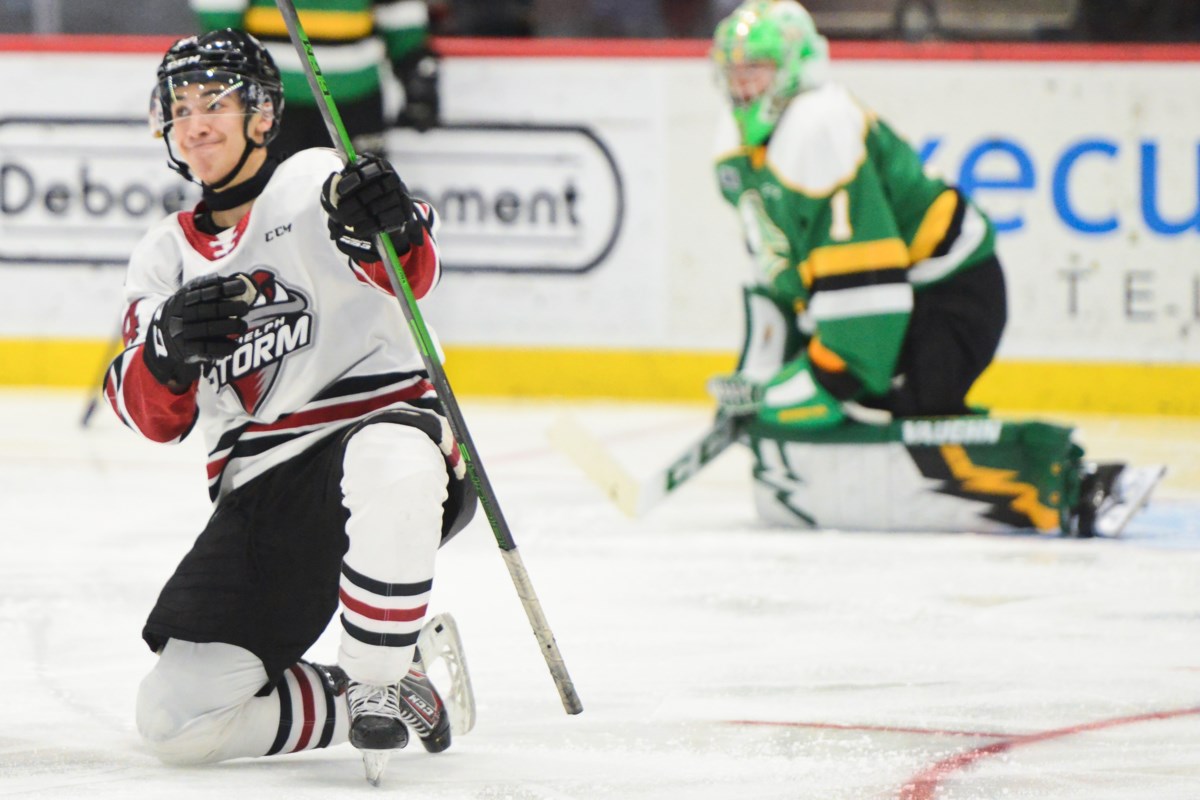 No one knows what the COVID-tinged future of the OHL is when it resumes after a 12-day holiday hiatus, but one thing is for certain: the Guelph Storm is best in the West heading into the break.

The Storm downed the London Knights 4-1 at the Sleeman Centre Saturday afternoon to leapfrog the Knights for first place in the conference.

It was Guelph’s fourth consecutive win over the Knights this season.

No one predicted Guelph to be first at this point, given they were one of the youngest teams in the league and started the season with no overage players. Even now they have two vacant overage spots.

“Obviously we’re pleased with where we’re at,” said Storm coach George Burnett. “It’s fun to be where we’re at, but we suspect there’s going to be a lot of teams in this conference that are going to shake up their clubs here.”

Burnett said the conference is very tight, but finding some secondary scoring has been one of the keys to the rise to the top.

“There’s so much parity and we’ve managed to stay healthy for the most part and everybody has contributed in some fashion, either big or small. For a while Sasha (Pastujov) was doing all our scoring, but some other people have begun to find the net more consistently. It’s fun to see the kids rewarded.”

Guelph isn’t scheduled to play again until Dec. 30 and hopefully the pandemic situation will allow it.

“I give our guys and Brie (Donelson, the team’s athletic therapist) a lot of credit for keeping everyone healthy. Our guys have stayed healthy within the community and they’ve spent a lot of time between the billet home and the rink and that’s not always a fun thing to do. They want to keep playing and they’re doing the things we’re asking them to do,” Burnett said.

It was 3-1 after the second period, as Guelph goals by Matt Poitras and Matt Papais sandwiched one by London’s Luke Evangelista.

London had just two shots on Owen Bennett in that middle frame.

The Storm played a solid third period defensively and iced the game when Braeden Bowman was set up nicely in the slot by Papais for a one-timer.

Guelph was missing Charlie Paquette (illness), Sasha Pastujov (world juniors) and Valentin Zhugin (early start on trip home to Russia) up front, so Cam Supryka played forward and Jakob MacRae was called up from junior B.