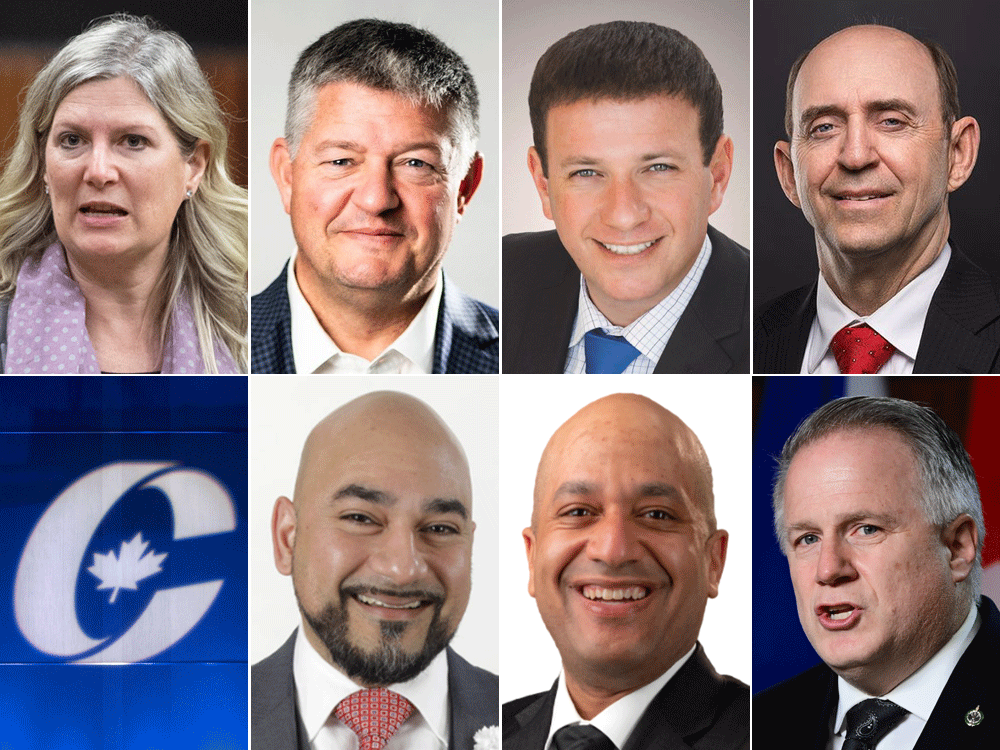 While all eyes were on the four main contenders of the Conservative Party of Canada leadership race — Pierre Poilievre, Jean Charest, Leslyn Lewis and Patrick Brown — many other prospective candidates have thrown their hat in the ring in the past days and it is fair to say that the race is getting pretty crowded.

Whether these new contenders are serious in their bid to become leader or if they simply want to raise their public profile, remains to be seen after April 19, the cut-off date to meet all the requirements. Here are some of the most recent Conservatives who hope to make the cut and see their name on the ballot come September 10.

Scott Aitchison was mayor of Huntsville, Ont., before being elected MP for Parry Sound-Muskoka in 2019. He’s now hoping to lead the Conservative Party of Canada as the unifying candidate who can bring his party and Canadians together.

“Throughout my career I have built teams by bringing people together to find consensus and work with each other to get things done. This is the right approach I want to bring to Ottawa so Canadians get better government,” Aitchison told the National Post.

“We need leadership in Ottawa that will be focused on making the lives of Canadians better, rather than the politics of division we have seen for far too long,” he said.

Aitchison was confirmed on Friday as an “approved” candidate, meaning he has submitted his first deposit of $50,000 to the party and was interviewed by the leadership committee. He still has to submit another $150,000 and a compliance deposit of $100,000 to be officially on the ballot.

Roman Baber, MPP for York Centre, got kicked out of the Ontario Progressive Conservative’s caucus in early 2021 for criticizing Doug Ford’s lockdown measures, and has since served as independent. He will not be seeking re-election in the Ontario election this year.

Instead, Baber will focus on trying to become the next leader of the Conservative Party of Canada because of what he considers to be an “erosion of Canada’s democracy” after two years of COVID-19 restrictions and vaccine mandates, which are still in place under federal jurisdiction.

“I have spoken against lockdowns when it was unpopular, as early as January 2021. And I have spoken out for the rights of Canadians long before some of the other contestants in the race have taken the same position,” said Baber in an interview with the National Post earlier this week.

If elected leader, he aims to unify the party as the “democracy candidate” and believes he can bring back Conservatives who have shifted away to the People’s Party of Canada. Baber is also an “approved” candidate, but still has a few steps before he can be on the ballot.

Joseph Bourgault, a businessman from rural Saskatchewan, raised eyebrows when he announced he was running for the  leadership. But he remains convinced his experience in business and his moral values will help him become the right person for the job.

“I’m an honest truth-seeking, principled, fiscally and socially conservative candidate. So, to me, truth is my driver, if you will. I believe in God and I believe that our Creator wants us to be men and women of honesty and integrity,” he told the National Post in an interview.

Bourgault is also president and co-founder of Canadians for Truth, Freedom and Justice, an organization that claims that the pandemic is being used by “governments, who are controlled by globalists, to justify the so-called ‘great reset’ which we STRONGLY OPPOSE”.

Marc Dalton has been the MP for Pitt Meadows-Maple Ridge, B.C., since 2019. Before that, he served as a B.C. Liberal MLA and was a teacher. He’s regularly touted his experience in provincial and federal politics, as well as his French and Metis heritage.

Speaking to the National Post, Dalton said he wanted to mend divisions in the country after seeing the Liberals use “wedge politics” to “squeeze out an election victory” in 2021.

Dalton has promised that, if elected, his first order of business would be to launch a national inquiry into the pandemic to examine contracts with ties to Liberal insiders, the “coercive measures” taken to incentivize vaccination as well as “vaccine injuries and deaths”.

“I am neither a politician nor a rockstar.” But Bobby Singh, a one-time unsuccessful Conservative candidate in 2019, intends to become at least one of these options by attempting to become a candidate for leader.

Singh, who had announced his intention to enter the race in 2020 but did not meet the qualifications, is getting his name out there once again. The self-described entrepreneur and business professional put out a video and a website with a platform for his candidacy.

“At this critical time in our history, let’s focus on delivering public service and leaving behind the polarizing politicking to others as a renewed conservative movement, one in which all Canadians from all political leanings can identify with,” said Singh in his video.

Leona Alleslev is the former MP for Aurora-Oak Ridges-Richmond Hill in Ontario. She was first elected as a Liberal in 2015, but crossed the floor in 2018 to join the Conservatives citing the prime minister’s increasing shift “to the left and away from the centre”.

She went on to serve as deputy leader under Andrew Scheer in late 2019, days before he stepped down. She continued to serve as interim leader until Erin O’Toole was elected in 2020.

Alleslev ultimately lost her seat in the 2021 election to the Liberals, and has been mostly out of the public eye since. But she discreetly launched a website for her leadership bid and was recently  seen collecting signatures in a social event in Ottawa according to National Post colleagues.

The former air force officer and corporate manager has not confirmed her leadership bid.

Joel Etienne has also not formally confirmed his candidacy for the leadership bid, but also has a website in place and is collecting signatures for nomination papers.

Etienne was an unsuccessful Conservative candidate in the riding of York Centre in the 2021 federal election. His website however boasts that his campaign had the “best results” for the Conservative Party of Canada in the “Liberal fortress of Toronto”.

A lawyer with a background in human rights and commercial law, Etienne is known for having defended a New Brunswick doctor who was blamed for bringing a cluster of COVID-19 cases in the province after having failed to self-isolate as required in the spring of 2020.