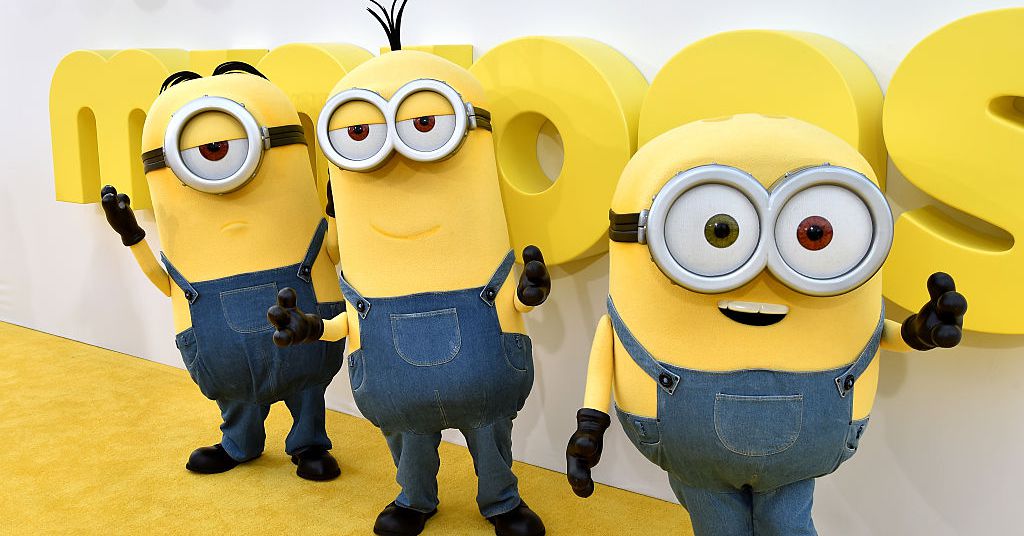 If someone asked you to describe the Minions, what would you say? Likely, you would detail their small yellow pill-shaped bodies, dressed in overalls and oversized goggles. Perhaps you would provide the context that the Minions are characters first introduced in the 2010 animated children’s movie Despicable Me, and that their purpose is to serve their villainous master Gru while providing comic relief to an otherwise disturbing if bizarre plot. (A man wants to steal the moon.)

You can say that they speak a language of gibberish punctuated by recognizable English words like “banana” (Minions love bananas) and “potato” and that their likenesses appear on everything from shampoo bottles to thongs. If you were generally an uncynical person, you might say that Minions are cute and people like them. If you were not, you might posit that they are agents of the capitalist machine, ready-made and endlessly merchandisable mascots that make the world’s destruction at the hands of mega-corporations seem adorable and fun.

As of this summer, you might also say that the Minions have very cool taste in music. In May, it was announced that the soundtrack for Minions: The Rise of Gru (out July 1) would feature covers of ’70s hits by contemporary cult favorites: Phoebe Bridgers covering the Carpenters, Tierra Whack on Santana. It’s not the only example of Minion street cred: menswear blog Hypebeast has cataloged their most recent fashion collabs, which include Japanese graphic artist VERDY, Brooklyn-based fragrance company Joya Studio, and Supergoop, plus previous collections with it-brands like BAPE and Away suitcases.

All of these pieces of merchandise are a blatant effort by Universal Pictures to convince adults — seemingly even adults without children who may already consider the Minions to be sort of subversive or ironically funny — to love and care about the Minions as much as children do already. Minions don’t need to be featured in streetwear collabs or on expensive sunscreen for their most fervent fans ( families) to buy tickets to see Minions 2. But Minions, above all, rely on a single principle: They must be everything, all the time — sort of like the economic system in which we live.

What are the Minions?

If you genuinely do not know what the Minions are, or would like to hear several fun facts about them, in 2015 my colleague Phil Edwards wrote 2,000 words on this very topic. The most interesting bit is that canonically, Minions have existed for at least 60 million years (the first Minions movie shows them serving a Tyrannosaurus rex), are all male (or have traditionally male-coded names), and are immortal (the same characters serve ancient Egyptian pharaohs, Dracula, and Napoleon). Most importantly, Minions are driven solely by their desire to serve a master villain, and become very depressed when they lack one.

Minions are the brainchildren of Pierre Coffin and Chris Renaud, the directors of the Despicable Me franchise, which includes three films (a fourth is slated to release in 2024), and two films centered exclusively on the Minions. Their design was inspired by the bright orange Oompa Loompas of the original Willy Wonka & the Chocolate Factory film, as well as the short, furry Jawas from Star Wars: Episode IV — A New Hope. Coffin and Renaud voice the Minions themselves and told the LA Times that the Minions are funny because they are, essentially, kids. “They lose their focus, they’re not very smart,” said Renaud.

What’s so great (and terrible) about the Minions?

The Minions as we know them today weren’t in the original script for 2010’s Despicable Me. “In the first film, they were depicted as this big army of muscular thugs doing the dirty work of the arch villain Gru and we quickly realized that they were very unappealing and made Gru a totally unsympathetic anti-hero,” Coffin told the Guardian in 2015. In order to make Gru seem charming, they made the Minions cute.

That they are adorable is precisely what makes the Minions so charming, and also so insidious. With clown-like slapstick comedy and clumsiness, the Minions allow children to see themselves in the characters, and allow adults to fawn over them. The LA Times recounted in 2013 that when Illumination Studio CEO Chris Meledandri showed them to Japanese animators, they praised them as “kawaii;” the fact they speak in mostly unintelligible gibberish allows them to translate seamlessly across international borders.

Yet the Minions are, at their core, servants of evil, both on screen and online. In a 2015 piece for The Awl called “How Minions Destroyed the Internet,” Brian Feldman argues that by being the platonic ideal of a franchise mascot — palatable, recognizable blank slates that can be made to do or say whatever we want — they have become the perfect meme. “Minions have been engineered to be everything and nothing at once,” he writes. Therefore, nearly any meme can feature a Minion and it would make sense.

Over the course of the 2010s, Minions have become synonymous with a certain kind of meme in particular: the “Facebook mom meme,” referring to the pithy, sometimes misspelled and deep-fried images that say things like “I don’t care what you think of me! Unless you think i’m awesome, in which case you are right. Carry on…” or “Putting your phone away and paying attention to those talking to you? there is an app for that- It’s called RESPECT.” A Business Insider article from the same year titled “Teens on Facebook are begging their moms to stop posting bizarre cartoon memes that make no sense” details the fallout of this phenomenon.

The absurdity of the Minions exists in the physical world too, drawing on the surreal, uncanny quality of the memes: People have created Minions 5K races, Minions Tic Tacs, Minions lingerie, Minions pumpkins, a Minions crochet men’s thong, and so many others that one Vice reporter tried to live a whole weekend off of Minions products alone.

What do the Minions have to do with capitalism?

This is the thrust of what may be my favorite academic article of all time, scholar Justyna Szklarczyk’s “Beautiful Exploitation. Notes on the Un-Free Minions.” The piece, which is translated from Polish, includes sentences such as “The working-class uniform clings to the Minion body” and “The bright yellow skin of the Minions makes it impossible for them to reject or abandon their class identity,” and makes the case that the Minions embody the ideal workforce and are exploited by it.

“They are standardized, highly interchangeable, and desperate for any job they can find,” writes Szklarczyk. “they neither bleed nor break, they do not require healthcare, they are tireless, unaffected by growth or aging, they remain unchanging and unchangingly ready to work.”

Their exploitation comes at the hands, she argues, not only of their master Gru but also of Universal Pictures. By being portrayed as the unruly proletariat, the film casts Minions as foolish and infantile creatures who are only able to actualize themselves under capitalism: Serving a master who belongs to the “transnational jet-set” of billionaire-coded villains who own private jets and live in palaces is the only way they seem to achieve happiness. Meanwhile, the film suggests that the Minion’s freedom from these masters is “precluded by the ostensibly limited cognitive capabilities of the working classes. Thus, the toil of the nascent subject is ultimately ridiculed.”

It might be possible to argue that by exemplifying the effects of capitalism, the Despicable Me franchise is actually producing anti-capitalist commentary. Szklarczyk doesn’t buy this, though: Because Gru is ultimately a good master to the Minions, the films fail as critiques of the system, and in fact condition children to live in an unequal world. “In such a world, those failing to side with Gru are considered misled, mistaken, or plainly wrong,” she writes.

This is, in short, how capitalism packages and sells itself: Those who are incapable of accepting the free market as an adorable, beautiful playground where everyone gets to feel happy and self-actualized are simply too stupid and childish to reap its benefits. It is not a mystery as to why the Minions’ most staunch critics are culturally aware left-leaning young people, people who might find them aesthetically creepy or cringe but metaphorically standing for something much more sinister.

Thus, there is only one solution: We must free the Minions, just as we must free ourselves.