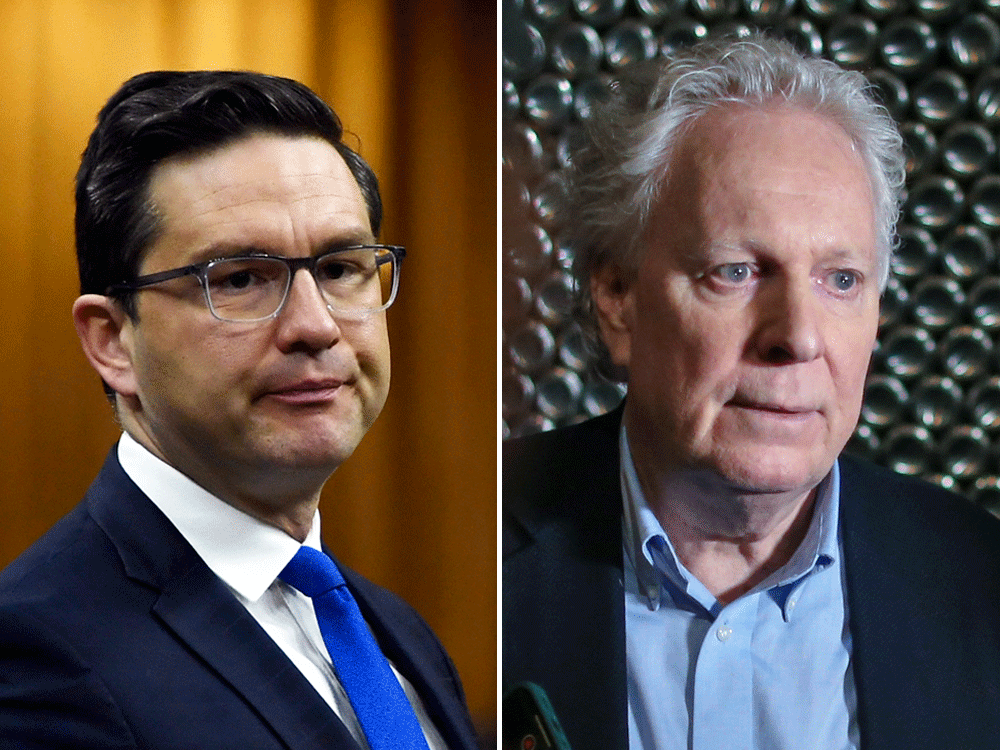 The possibility of having the next Conservative leader serve up to three years on the opposition benches before the next general election presents opportunities as well as challenges for leadership hopefuls, according to strategists.

With a Liberal-NDP deal in place until 2025, Conservative leadership contenders Pierre Poilievre and Jean Charest, in particular, might want to think twice before claiming they are “running for prime minister” or that they are “built to win” a majority government.

“The reality now is that that could be years away, so I think it does change the strategy,” said Michael Solberg, a former Conservative staffer and now partner at New West Public Affairs.

“Also, what I think it does is it takes a bit of the target off individual Conservative candidates’ backs. I think that there might be less infighting amongst members and, hopefully – more of what I imagine will be the case – they will start attacking this Liberal-NDP coalition.”

The Liberals and the NDP announced on Tuesday that they had reached not a coalition agreement, but a confidence and supply deal, which will see the NDP support the Liberal government in exchange for action on NDP priorities like pharmacare and dental care.

While it remains to be seen if the deal will last until June 2025, as planned, it defeats the Conservatives’ sense of urgency in choosing a new leader and preparing for an election that could be called at any given time in a minority Parliament.

Erika Barootes, a Conservative strategist who won an Alberta Senate election as the party’s representative, said the short timeframe of less than a year that former leader Erin O’Toole had to get ready for the next election certainly did not help him get elected.

Barootes, who is vice-president of Western Canada for Enterprise Canada, thinks that federal Conservatives could benefit from having several years to figure out the way forward.

The party could also benefit from having “a little bit of extra time to heal the wounds and fix the fissures” after what could be a divisive, and potentially ugly leadership race, added Tim Powers, chairman of Summa Strategies and former strategist.

“Some effort will have to be made to bring people back into the fold because this is not going to be a leadership race, at least at this stage, where the winner is going to have a healthy, happy party,” said Powers in an interview.

So with this deal in place, what are the main challenges and opportunities for the main candidates – namely Pierre Poilievre, Jean Charest, Patrick Brown and Leslyn Lewis?

If he becomes leader, Poilievre would benefit from having some time to distance himself from some of the attacks he launched against his opponents and to present a more polished version of himself to the broader electorate as a candidate for prime minister.

Marc-André Leclerc, former strategist and principal at Maple Leaf Strategies, said he has already seen a certain “transformation” in Poilievre as an MP and as an aspiring leader.

“What I’ve seen in his recent Quebec tour, in his interviews, with his tone, his way of presenting his arguments, I felt that he was projecting an image of someone who is a lot calmer, and that’s even more important when you’re in the leader’s seat,” he said.

Barootes said that Poilievre would benefit from having a few years to gain a better understanding “of what being a leader of a party of a caucus looks like”. “So I think, for him, the learning curve of what it looks like on the internal party side will be an advantage for him.”

The same thing could be said for Lewis. “She is probably the one, of that class of four, who would welcome having some more time to prepare for a general election, given that she is the least experienced of those four at building a national campaign organization,” said Powers.

Charest and Brown, on the other hand, have leadership experience, but do not currently hold a seat in the House of Commons unlike Poilievre and Lewis.

“So if this thing is going to go on for three years, it would be expected that they would have to win a seat in a by-election. So you have to go through all of that again. It’s not an insurmountable thing, but it’s an inconvenience,” said Powers.

Charest, who came back to politics at the age of 63, would have to wait yet another three years, potentially, to have a shot at becoming prime minister. And he’ll then have to present fresh, new ideas to attract a whole new generation of voters, according to Solberg.

“For the first time in history, the millennial population is the largest voting bloc. They have the largest purchasing power of any demographic, and he’s got an appeal to them, despite his generational gap and very, very long political career that began in the 80s,” he said.

If the Liberal-NDP deal goes on long enough, dissatisfied Liberal voters could be tempted to take a good look at the Conservatives. This could present a “huge opportunity” that would be “most beneficial” to Charest or Brown, said Powers.