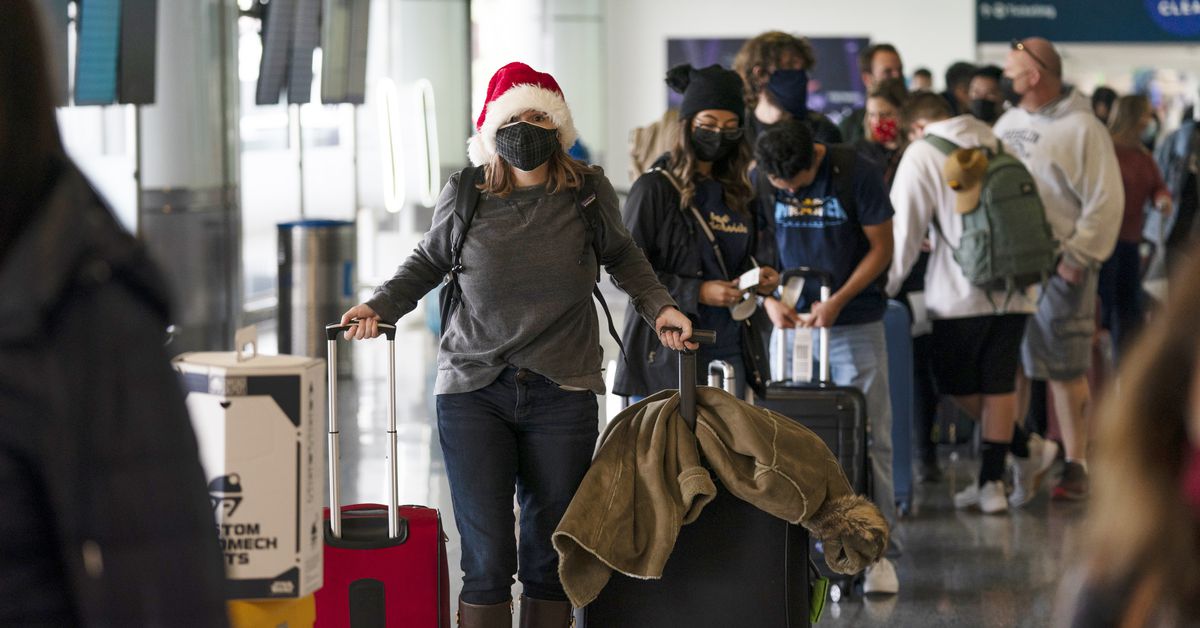 The coronavirus seems to really hate the holidays. Within the past week, the omicron variant, which accounted for less than 1 percent of new US cases in early December, has spread rapidly across the country to become the dominant Covid-19 strain. Schools and college campuses have suddenly shut down, and sports leagues, namely the NFL and the NBA, are delaying games as more and more players test positive. Omicron seems to be responsible for a record level of breakthrough cases among vaccinated people, and things are beginning to look a lot like the Covid-filled Christmas of yesteryear.

For many, 2021 was the promised year when we could safely attend in-person reunions with no masks and no fear of infecting our loved ones. Omicron has dashed the hopes of an entirely carefree holiday season. It will add further strain on already-struggling hospitals and could overwhelm the country’s finite supply of health care workers, who are already suffering from burnout.

Despite this, most Americans, whether they are fully vaccinated or not, likely won’t cancel or change their end-of-year holiday plans. The Thanksgiving holiday saw a jump in airport travel numbers, with TSA screening over 10 million passengers from Wednesday to Sunday, and the airline industry is already expecting Christmas travel to surpass that. Airlines don’t seem to be reverting to pandemic-era policies anytime soon: Tickets are no longer easily refundable, and planes are fully packed with passengers.

Last year, states like New York, Connecticut, and California urged out-of-state travelers to undergo a brief self-quarantine period upon arrival, while the CDC advised Americans not to travel at all. Circumstances have shifted since last December, though: Virtually no one was vaccinated. This year, state and federal officials don’t seem keen to declare any sort of official travel guidance or impose any restrictions. That leaves individuals and families to, once again, independently weigh the risks and rewards of gathering for the holidays.

Americans — regardless of vaccination status — are still allowed to fly domestically without providing either proof of vaccination or a negative Covid-19 test prior to boarding. What’s especially concerning is that the delta variant is still surging throughout the country, and the rate of hospitalizations, especially in regions like the Midwest and Northeast, has been on a steady rise. However, some epidemiologists and public health officials don’t think vaccinated Americans should scrap their end-of-year plans but instead adopt risk-mitigation strategies, like testing frequently or limiting social interactions before a large gathering.

“I think there really is a risk-benefit calculation that has to be made, and I think that’s going to be an individual, and family, choice,” David Dowdy, an epidemiologist at Johns Hopkins, recently told Vox’s Sigal Samuel. “Make sure that everyone who is going to be at a given gathering feels comfortable with a small (and therefore unvaccinated) child being there. The one thing you don’t want to do is make others in your family uncomfortable.”

In an op-ed for the Washington Post, physician Leana Wen echoed Dowdy’s line of thinking and argued that restricting holiday activities is unnecessary and would “serve only to disincentivize vaccination.” Wen, a mother to two children who are too young to be vaccinated, believes “it’s not irresponsible for others to make different choices when the reality of how Covid-19 impacts them is now very different from [hers].”

Caretakers of unvaccinated children and immunocompromised or elderly Americans are, of course, in a separate decision-making boat than healthy, vaccinated adults. Even then, some families are making the last-minute decision to alter — or in a few cases, outright cancel — plans until more is known about omicron.

Tanya Dua was expecting to reunite with her parents, who were flying from New Delhi to New York, after two years. But with over 42,000 New Yorkers testing positive in the past week, Dua wanted her father and mother, who respectively received the AstraZeneca and Covaxin vaccines available in India, to stay put and not risk a 15-hour international flight.

“It was a tough call,” Dua said. “I’m in the middle of some immigration stuff so I can’t leave the country, but if I was able to travel, I would’ve flown to them. India isn’t even talking about boosters right now, and I didn’t want my parents to jeopardize their health.”

Ten days before Christmas, Marlo, a resident of Rhode Island whose last name is being withheld to protect her privacy, sent an email to family members that detailed a pre-gathering testing plan, even though they are all vaccinated with boosters. Marlo, who jokingly described herself as “the family whip-cracker,” has been concerned about her relatives’ lack of mask use in indoor spaces, like restaurants and bars.

“I just want to get us through this pandemic without getting the virus and, heaven forbid, long Covid,” she said over Twitter direct messages. “And since we really don’t know enough about omicron yet, and since there are so many breakthrough cases, and since my parents-in-law are in their 70s, I’m not taking any chances.”

The plan is to get everyone a rapid at-home test kit from CVS before the holidays so they can swab themselves on Christmas Eve morning before meeting up at her home in the evening. “If it were up to me alone, the entire celebration would be outside, but it looks like I’m going to lose that battle,” she added.

However, at-home tests aren’t so easy to come by, and they cost about $25 for a pack of two. Recode’s Rebecca Heilweil reported that rapid antigen tests are out of stock at many drug stores nationwide, and lines for PCR tests in cities like New York, San Francisco, and Chicago easily stretch around the block: “The problem will likely get worse as more people travel for the holidays and fuel new outbreaks, long before new supplies of tests from the federal government are scheduled to arrive.”

On December 21, the Biden administration announced its plan to expand Covid-19 testing sites across the country and send Americans free home test kits in the new year. These federal initiatives, however, might come too late: Christmas and New Year can easily morph into superspreader holidays if there aren’t enough testing resources.

Still, some people weren’t planning to make significant changes to their holiday schedule unless the worst-case scenario occurred: catching Covid-19. Lauren, whose last name is being withheld to protect her privacy, flew from New York this week to be with family in Florida and was adamant about not canceling her flight unless she tested positive.

“I wasn’t going out that week when everyone got Covid, so I wasn’t too worried,” she said. “Of course I got tested, but I think — and my family agrees — that it would be an overreaction if I canceled my trip. Sure, Florida isn’t the safest place in the world, but we’re vaccinated. We keep to ourselves and wear masks indoors, so my parents had no problem with me coming home.”

Requesting a refund or a voucher through the airlines would’ve also been a logistical nightmare, Lauren added. She had a basic economy ticket on American Airlines, which, according to its website, is non-refundable and non-changeable for fares bought after April 1, 2021. Airlines likely won’t reinstate their early pandemic travel policies, whether it be for social distancing or flexible rebooking. That means most economy-level passengers will lose money, even if they decide not to fly out of health concerns. And the rental car market has not been easy to navigate for travelers who want to drive to their destination rather than fly. Rental cars are still in high demand, with vehicles going for absurdly high prices even in smaller cities.

For vaccinated families, this year’s holiday gatherings should be less stressful than the last, but there’s still an uneasiness around how everyone — regardless of vaccination status — is left to play “Choose Your Own Pandemic Adventure.” Covid-19 isn’t over, but Americans are tired and their vigilance is waning. There isn’t a simple decision, and the choice to change or to keep holiday plans can vary depending on a person’s overall tolerance for risk.