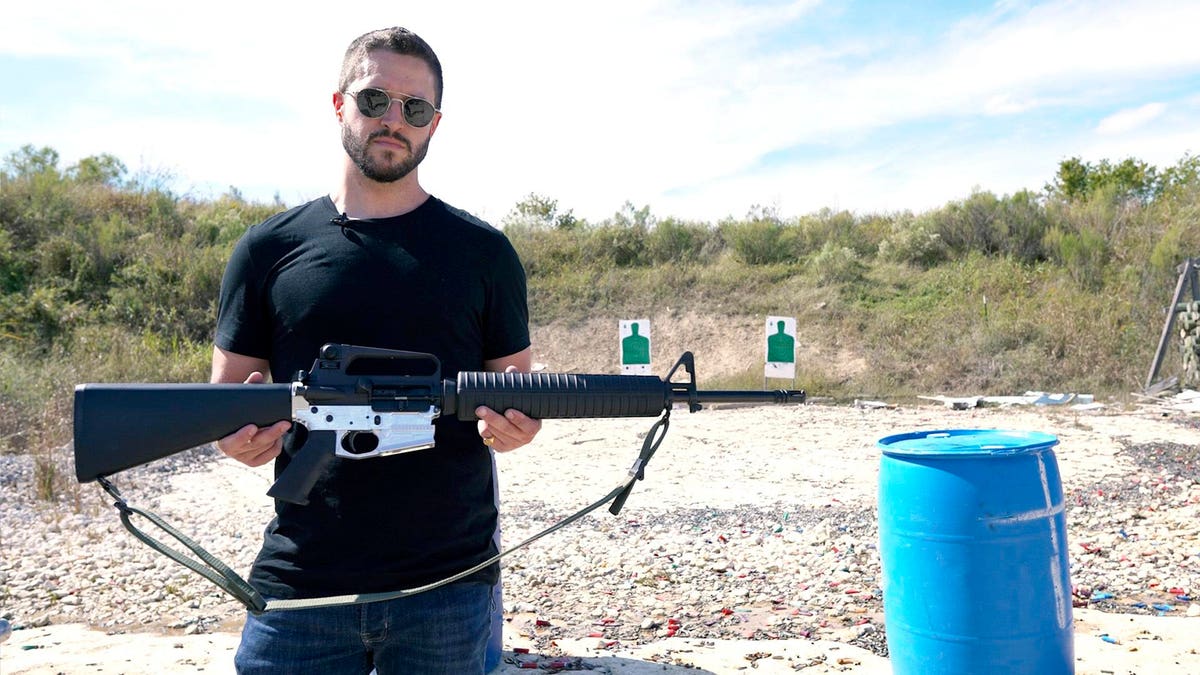 Cody Wilson is hunkered down in a dimly lit warehouse behind the headquarters of Defense Distributed, the Austin, Texas company best known as the maker of the first 3D printed plastic gun. As a film crew shines a spotlight on him to record a demonstration of his new Zero Percenter desktop software, a vast library containing 11,000 books, films and 3-D printable gun blueprints appears from the blackness behind him. His new software is capable of turning a raw block of aluminum into the receiver for an AR-15 assault rifle in just three hours.

Wilson, who describes himself as a crypto-anarchist, relishes shock value. He shows his visitors a collection of hunting pelts: zebra, wolf, coyote, and deer, and then makes allusions to the perpetrators of the January 6, 2021 assault on the U.S. Capitol, which left five dead and 700 facing criminal charges. “January six was an insurrection,” says Wilson, 33. “Except on January six, it was fake horns for fake,” he adds, smiling wryly. “In mine it’s real for real.” On the shelves behind him are a mix of books ranging from the Hardy Boys, to a treatise on Nazi Doctors. A bundle of a half-dozen steel-tipped spears and a police riot shield lean against the wall behind him.

The Biden administration recently proposed new regulations defining exactly what constitutes a firearm and which specific parts are required to have ATF-issued serial numbers for tracking. If enacted, Federal Firearms licensing and serial numbers will be required on many gun components that heretofore could be bought and sold without regulation. Wilson’s new software, which he intends to release later today, is designed to circumvent those controls by converting a 1.5 inch by 8 inch block of aluminum into the essential component of a firearm using one of Defense Distributed’s $2,500 Ghost Gunner 3 desktop printers.

Dubbed the Zero Percenter, because it can turn a completely untouched piece of aluminum into a firearm, the software and a few accompanying components are Wilson’s answer to what he considers government overreach. He seems to care little about the “open source” terrorism and crime it might unleash. So-called privately made firearms or ghost guns, the type Wilson has long championed, have confounded law enforcement officials for years. According to the Bureau of Alcohol Tobacco Firearms and Explosives, from 2016 through 2020, some 23,906 suspected ghost guns were recovered from crime scenes, including 325 homicides or attempted homicides.

“There’s always going to be this mystical platonic line where a component becomes more like a gun than not a gun, and to regulate those intermediary steps of manufacture in any serious level completely disrupts modern American manufacturing, the American system,”  says Wilson, dressed in black and brandishing a 24-carat gold ring, embossed with the initials DD. “They are literally trying to control the world. But as the Zero Percenter demonstrates, blocks of metal are also guns.”

Cody Wilson was born in Little Rock, Arkansas, the son of an attorney who moonlighted as a preacher and his mother, a network administrator for an insurance brokerage. In middle-school his father gave him a copy of economist Friedrich Hayak’s Road to Serfdom, about how centralized economic planning homogenizes the working class. From there he studied, Karl Marx, Vladimir Lenin and Michel Foucoult, undergoing what he calls a “self-radicalization” culminating in the discovery of Timothy May’s 1988 Crypto Anarchist Manifesto, about how cryptography can empower individual rights.

Convinced that the U.S. founding fathers had prioritized freedom above democracy, he started to experiment with what he describes as “poisoning” the electoral process, by undermining the 2012 presidential election. He filed paperwork to found a Political Action Committee with the expressed purpose of funding campaigns on behalf of poorly funded House of Representatives candidates. To “turn people completely off to the electoral and political process,” as he wrote in his 2016 book, Come and Take It. To “play by the rules, but ruin the game to show the absurdity of it all.”

Wilson’s rhetoric ranges from destructive to bizarre. “A mature reading of all the history of political science is rescuing governments from democracy, especially ours,” says Wilson, adding that he believes the founders didn’t want a democracy and hoped to avoid it. “And so in that respect,” he says. “I’m just thoroughly American in my point of view. How can we prevent democracy from happening or ruin the democracy that has broken out?”

In June 2012, after a year studying law at the University of Texas, Wilson gave up on trying to undermine the system from within after the Supreme Court upheld the Affordable Care Act, something he believes is an affront to his freedom. “I realized I had to become a pirate,” he says. “Hoist the black flag.” Four months later he founded Defense Distributed to create the first 3-D printable plastic gun, The Liberator, and give the code away.

Initially Wilson wasn’t concerned about generating revenue from the idea, but after 26 people, mostly children, were gunned down at the Sandy Hook Elementary School in December 2012, his business got an unexpected boost. While the rest of the world was in shock or mourning, gun enthusiasts flocked to his website fearing a government crackdown on firearm ownership. After the blueprints for his Liberator 3D printed gun “dropped” in May 2013 Wilson began earning about $20,000 a month from Google Ads, he says. “That’s the start of all this.”

Wilson claims he’s always has his guard up, equally concerned about legal ramifications if his products are used in a shooting and the personal concern of knowing his work was used to harm someone.  But in his 2016 book, he describes a cartoon depicting a character crying out, how many more children will have to die before you support gun control? The cartoon ends with a helmeted angel and a camouflage face coming down from heaven answering: “All of them.”

Wilson’s potentially deadly innovations have faced dozens of legal battles over the years. He highlights his lawsuits against the U.S. State Department and the State of New Jersey, as the most important thanks in part to the impact they could have on his argument that his gun making code is protected as free speech. His inclusion of the code in his library is designed to demonstrate the point. Nevertheless, Wilson’s websites have been forced to close multiple times over the years following U.S. state lawsuits alleging they violate gun control regulations.

Besides his legal entanglements over his ghost guns, Wilson pled guilty to Injury to a Child in 2019 after he was was arrested for paying $500 to have sex with a 16-year old girl he met on a website called Sugardaddymeet.com. Wilson is now a registered sex offender and is serving seven years of probation. As a Texas resident, his guilty plea to a felony has so far had little effect on his firearms business, and part of his plea deal allows him to continue to own guns.  “I’m on felony probation,” says Wilson. “I didn’t get prosecuted and I’m thankful for that.”

The spark that drove Wilson to create Zero Percenter was ignited soon after Biden won the election in November 2020. At about that time, gun control activist Christian Heyne of Brady United proposed that Biden and Kamala Harris use their executive power to broaden the definition of firearms to include unfinished frames—called 80 Percenters by gun rights groups. These frames or receivers need additional fabrication to be made into finished firearms, and therefore avoid serial numbers and tracking by the ATF. 80 Percenters are widely available via online dealers and are used by DIY gunsmiths to make dozens of models ranging from Glock style semi-automatic handguns to assault rifles like the AR-15.

Heyne argued that, besides evading law enforcement, ghost gun makers were effectively stealing from the legitimate firearms manufacturers in the $63 billion industry. “By shutting down this market, which is undermining the firearms industry, ultimately it allows that industry to operate as it should, with responsible gun dealers,” Heyne says.

Two mass shootings in March 2020 were apparently enough to get the Biden administration moving on Brady’s proposals. The following month the Department of Justice published a 72-page proposal for regulations that would change ATF’s definition of a firearm eliminating the loophole that has allowed the 80 Percenters to flourish. Registered serial numbers would be required on nearly every part of a gun.

Wilson believes his Zero Percenter puts the new government regulations in check mate.  In addition to being made available on USB memory sticks he plans to release the file containing this software at no extra cost to paying members of Legio, a group of “supporters” he describes as a fraternity, founded in 2018. Legio members, who pay between $5 and $8 per month, are the only ones who can access Wilson’s DEFCAD, a Napster-like website hosting 16,000 files for making firearm and gun components. Besides his Ghost Gunner fabrication machines, Wilson’s Defense Distributed also sells 80% receivers on his site for between $50 for an AR-15 to $176 for one fitting a Glock made by Nevada-based Polymer80. According to Wilson,  Defense Distributed generated $4 million in revenues in 2020, and is on track to bring in $5 million in 2021.

While Wilson initially hoped to release his Zero Percenter software on January 6th, to mark the one-year anniversary of the insurrection, is expected to be unveiled later today at the Hereticon “conference for thoughtcrime,” hosted by Peter Thiel’s Founders Fund.

Speaking from a firing range on the outskirts of Austin, the man who was twice named to Wired’s list of most dangerous people in the world, expects the new ATF definition of a firearm will “double or triple” the size of his company. By the ATF’s own reckoning in the proposal, the regulation will likely force many of what Wilson estimates are his “dozens” of competitors in the self-made firearms industry to become licensed manufacturers. Others will reduce the kinds of products they sell, or be put out of business. He believes Joe Biden’s new rules will pave the way for his market dominance among homemade gun enthusiasts.

“When I first started the company I felt more,” says Wilson, interrupted by a burst of gunfire a few yards away, “ I would tell my team, this is our vehicle to run into the ground, to crash into the tower. This company is a weapon.” He adds. “Now I don’t feel I can play it that way. People have families. I’m a man in my thirties. I have a bookkeeper.”

“Only Three can do the work,” he says, noting that Defense Distributed has shipped 2,700 Ghost Gunner 3’s since last year and has 800 more on back order. While the final prices of the Zero-Percenter software kits have yet to be determined, Wilson has already made 100 of them, and is waiting to gauge demand before making more.

“This is no niche thing,” warns Wilson. “We’ve made millions and millions of dollars and been able to stay in federal court for years. We have no billionaire Adelson partner. We don’t have investors…And I’m quite a toxic personality.”