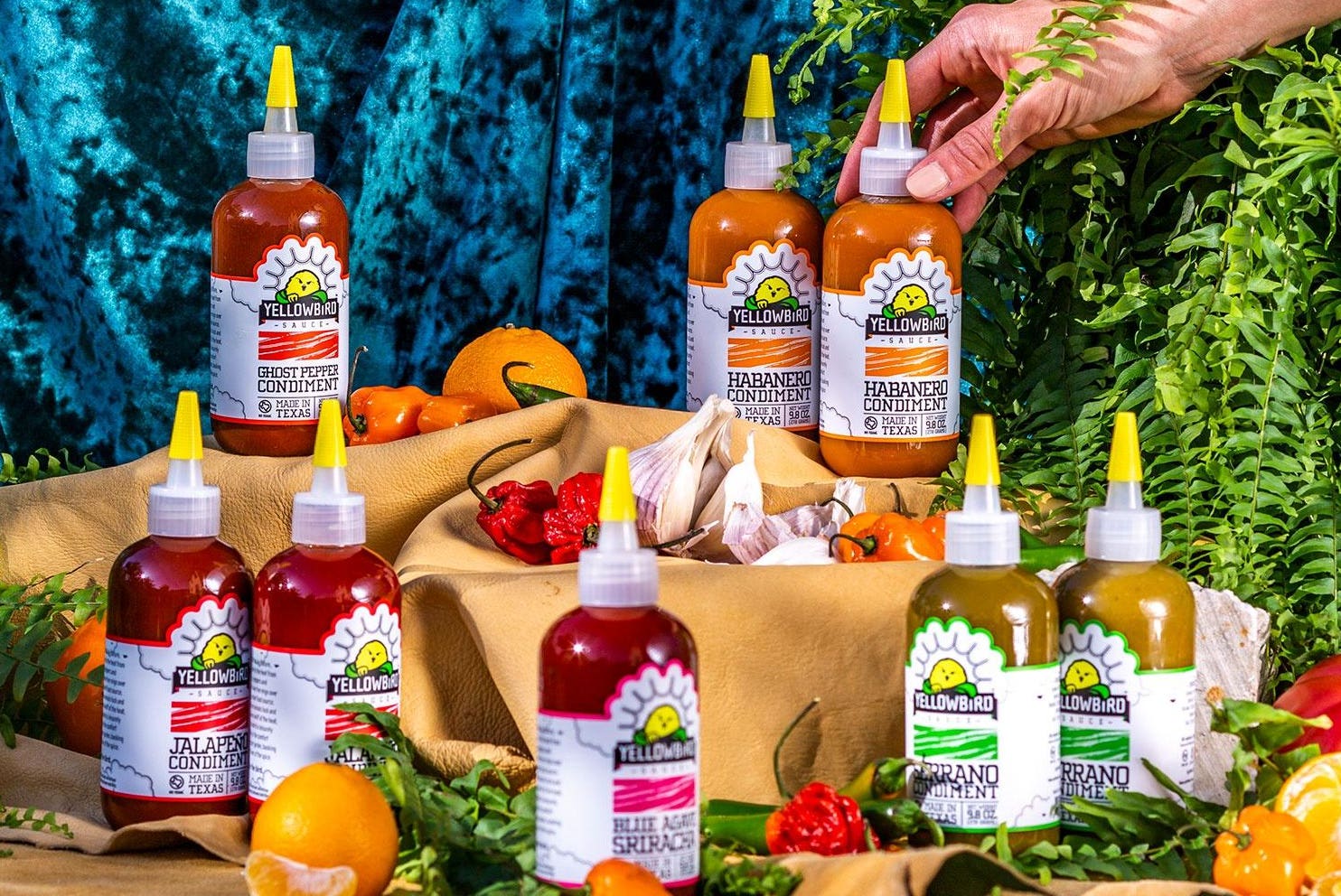 According to a recent report by Fortune Business Insights, the global hot sauce market is projected to double in size over the next 5 years, growing from $2.71 billion in 2021 to $4.38 billion by 2028. As industry titans like The Kraft Heinz Company, McCormick & Company Inc., and Unilever scramble to stay ahead of this fiery trend , a Texas-born brand is perched happily atop the mounting expansion.

Yellowbird Foods began in Austin in early 2012 as a labor of love between co-founders George Milton (a musician) and Erin Link (an artist) became increasingly frustrated with the number of chemicals and preservatives found in spicy condiments on shelves.

The couple had recently turned to a healthier lifestyle and were trying to eat as cleanly as possible, but they struggled to find a store-bought hot sauce that didn’t contain artificial ingredients. Between Milton’s culinary curiosity and Link’s passion for plants, the two resolved to develop their own chili sauce.

Within months, they began offering their Yellowbird Habanero Condiment at farmers’ markets around the city and approached as many local restaurants as possible, encouraging tabletop placement, citing novelty, scarcity, and overwhelming demand.

“In the early days, I was just riding my bike around Austin with a backpack full of hot sauce sampling it with chefs at different restaurants,” Milton recalls. “It actually took a really long time before I could convince anyone to carry it since it was an unknown brand. Luckily, Austin loves the quirky and the unknown!”

In August of 2013, they entered their creation into the Austin Chronicle Hot Sauce Festival for the first time. Competing against 60 other bottlers and hundreds of hot sauce flavors, Yellowbird took home the 1st place trophy. This win not only validated their work but also gave them enough exposure that local grocers and restaurants began purchasing regularly.

“We named the company Yellowbird for a variety of reasons,” explains Link, who designed the logo, packaging, brand identity, and visuals. “First, we wanted a mascot that stood in sharp contrast to the typical hot sauce imagery — flaming peppers, grinning devils, or glowing radioactive warning signs. Second, we needed a symbol that embodied our intentions for the brand from the beginning, something that evoked nature and nourishment, but also, our passion and determination.”

In researching different varieties of peppers, Milton came across a species of small yellow birds native to Thailand. “Unlike mammals, birds are completely immune to the capsaicin burn, and this particular species is known for eating piquín peppers whole to ward off predators. It’s a food source untapped by other animals, and they are so hot they even deter insects. The seeds pass through the bird’s digestive system and they propagate their favorite little meal as they fly. It is a beautiful picture of the symbiosis of nature.”

Today, Yellowbird is sold across the country. They offer two lines of hot sauce, each boasting a variety of flavors and certifications, and have released limited new flavors seasonally since their inception.

“Growing this from a handful of local stores into a national brand has been a huge and rewarding undertaking,” Milton said. “We decided early on that it was only worth growing if we could do it right — with the original recipes and fresh, organic ingredients.”

That commitment from day one is certainly paying off as Yellowbird expands into new markets and spicy sauce categories.

Yellowbird received its latest boom when its new wing sauce was featured as number two of ten in the lineup of progressively spicy condiments tasted on Season 16 of Hot Ones. Fans watched the likes of Jimmy Kimmel, Meg Thee Stallion, David Chang, and Tom Holland taste and react to Bliss & Vinegar, a sweet and tart experimental sauce developed exclusively for the show.

It’s blended to a mellow burn at 6,200 Scoville Heat Units, or SHU, which lands in the same heat range as cayenne pepper and Tabasco. Recommended pairings are chicken wings, of course, in addition to roasted sweet potatoes, sandwiches, or a charcuterie board.

Bliss & Vinegar is available nationwide via online shipping to all 50 states. In late March, it will be hitting store shelves with distribution in over 246 H.E.B. grocery stores, and permanent menu placement at all 26 Pluckers restaurants.

Place the chicken in a large bowl and season with salt. Pour the buttermilk on top, making sure the chicken is submerged. Cover, and allow chicken to marinate in the fridge for 1 hour minimum, up to 24 hours.

Remove the marinated chicken from the fridge; set aside. Preheat a deep pot with vegetable oil – make sure the oil is about half-full in the pot. Using a thermometer, heat oil to 350ºF.

Whisk together the coating ingredients in a large bowl: all-purpose flour, salt, pepper, and shredded coconut, if using. Transfer the marinated chicken into the coating mixture, one at a time, making sure some of the marinade drips into the bowl: the droplets of marinade create a craggy texture (aka the crispy flaky bits on the chicken) that will adhere to the chicken. Liberally coat the chicken, making sure to press and toss to get into all the nooks and crannies.

Carefully drop the chicken in and fry until golden brown with an internal temperature of 165F, about 12-15 minutes. While the chicken cooks, prepare a sheet tray lined with a cooling rack; set aside. Once the fried chicken is ready, remove from oil and lay onto the rack to rest; about 4 minutes.

For the finishing sauce