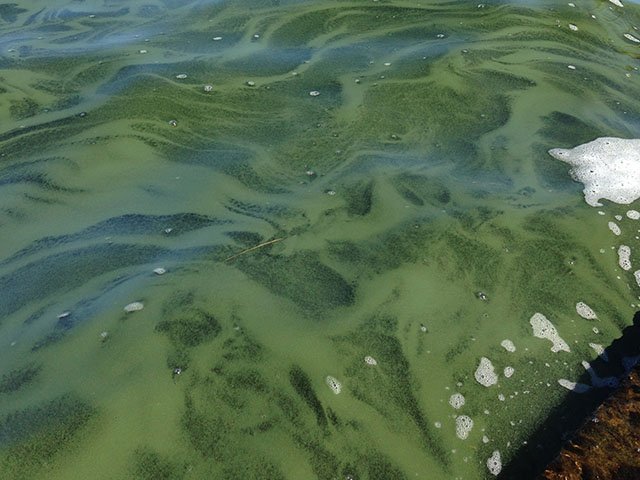 The Clean Lakes Alliance has been monitoring the Madison-area lakes for cyanobacteria, or blue-green algae, in an effort to provide season-ahead algal bloom forecasting. Blue-green algae was responsible for at least eight of the 22 beach closures last summer. Beaches have been closed by the public health department in recent weeks due to high bacteria readings, though all are open now.

Dr. Paul Block, an associate professor in the Department of Civil & Environmental Engineering at UW-Madison, has been conducting research to gauge the predictability of Lake Mendota’s water quality and hopes to apply his research to other area lakes as well. His research is the basis for the algal bloom forecast in the lakes of Madison.

He talked about his research June 8 at the Clean Lakes 101 Science Cafe, part of a series of educational events that are designed to educate the public about the “science behind the issues” affecting Madison’s lakes.

“There are lots of different sources [of blue-green algae], both from urban and residential runoff — leaves that come off our yards, fertilizers and pesticides, different types of activities that contribute to runoff that eventually makes its way to the lakes in terms of phosphorus and nitrates, agricultural applications upstream of the lakes, and legacy nutrients,” Block said. Legacy nutrients are phosphorus and nitrate particles in the ground that are suspended and left over from previous runoff, and will most likely remain there for years to come.

Blue-green algal blooms tend to be unpredictable. According to Block, we must know what is happening in the spring in order to make any predictions for the summer. He and his team look at local variables, including precipitation events, soil moisture, temperatures, and discharge levels from agricultural runoff. They also take global variables into account, such as the conditions of the equatorial Pacific Ocean that influences the overall climate here in Wisconsin. Heavy rainfall will wash phosphorus and nitrates in the soil into the lake. Couple that with the high temperatures of summer, and a blue-green algae bloom is likely to occur.

This spring, Madison had more rain than usual, the discharge from agriculture was normal, and the equatorial Pacific Ocean temperature was down. Based on this, Block’s research shows that Madison lakes will experience an average to slightly above average amount of cyanobacteria.

“There’s nearly a 96 percent chance that [cyanobacteria abundance] will be near normal or above normal levels,” said Block. “Now I want to be clear. That does not indicate that there will be more blooms than average, but the probability for having these blooms will be higher than average if indeed the cyanobacteria levels are higher.”

In short, the more cyanobacteria present in the lake, the higher the likelihood for a bloom.

However, sometimes the findings do not work in concert. Even with these results, Block’s research also suggests that Madison will have a normal number of beach closures due to blue-green algae blooms, meaning each beach might be closed about 2-4 days throughout the summer depending on conditions.

Algal forecasting is not an exact science, and sometimes, high probability for cyanobacteria does not lead to high numbers of algae blooms. For example, according to Block’s research, in 2009, the forecast called for a high probability of a bloom, but the lake experienced significantly low levels of cyanobacteria. They found that spiny fleas, which feed on cyanobacteria, found their way into the water, lowering the levels.

Block and his team conduct two algal bloom forecasts: one based on research done from March-May predicting blooms for the whole summer, and another based on research done in June for the remainder of the summer. Block has found that his in-season prediction issued at the end of June for the months of July and August tends to be the most accurate, so we will have to wait until the end of the month to see if anything changes.

Although Lake Mendota happens to be one of the most studied lakes in the world, blue-green algal forecasts are still in their infancy, so while they are helpful, they are not definite. As of right now, Block’s research suggests that there is no overall trend for blue-green algal blooms, at least not for Lake Mendota. However, the research has contributed to increased public awareness and testing, and Block hopes that it will lead to more training for those who work in and around water and a bigger budget to help maintain the lakes. As for now, Block continues to incorporate new techniques into his research, and plans to extend this research into other Madison-area lakes.