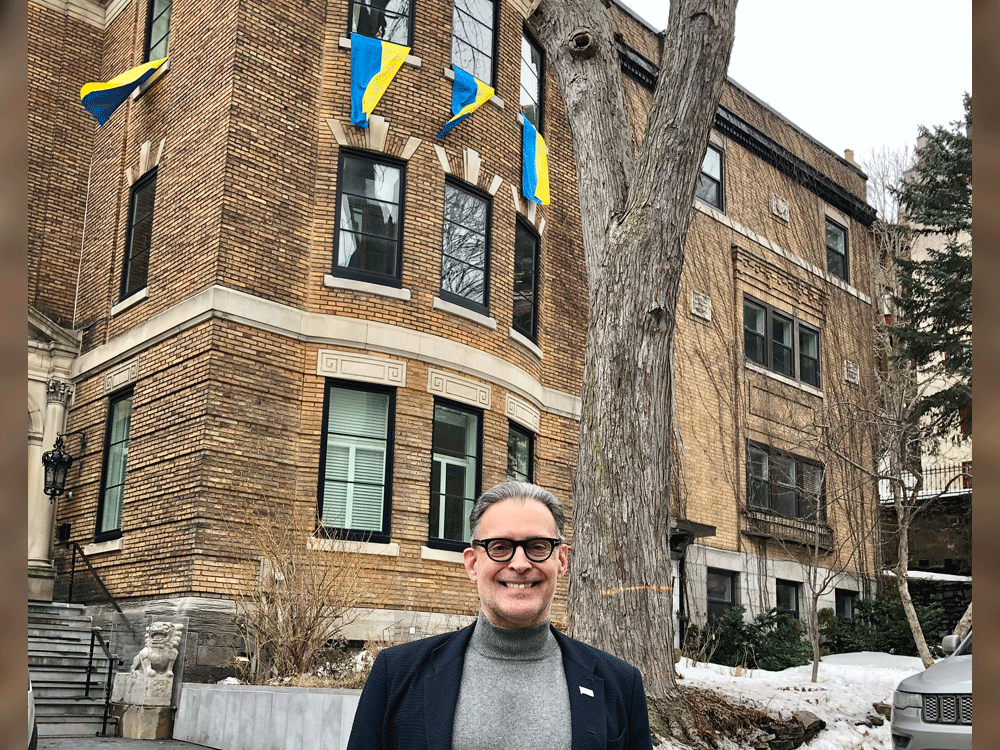 Every day around noon since Tuesday, Montreal city councillor Serge Sasseville walks from his home to the front gate of the Russian consulate across the street. He raises a speaker in front of him and presses play.

Three times, he blasts the Ukrainian national anthem towards Russia’s diplomats. Between every song, he yells slogans in support of Ukraine or against Russia such as “Slava Ukraini” (glory to Ukraine), “Stop Putin now” or “Stop the war.”

“I found a sung version of the Ukrainian anthem, so I go to the main door of the Russian consulate with my iPhone and a Bose speaker, I obviously put the volume to the maximum and I play it,” Sasseville said during an interview Friday.

But on Friday, the consulate seemingly decided to fight back. When Sasseville began his daily musical ritual, he says Russia’s employees fired back with a song of their own through a speaker built into the fence in front of their building.

“They played some music I did not recognize full blast in an attempt to cover me up. So, I put my hand on top of their speaker and I kept playing music,” Sasseville said with a laugh. “I found that really special, we’ve gotten to the point of trying to musically censor me.”

On social media, Sasseville posted a picture showing the intercom speaker on the consulate’s fence he says was used to “perturb” his daily musical ritual. The intercom is surrounded by red paint thrown by protesters earlier in the week.

Consulate staff did not respond to emailed questions from National Post Friday.

Like most Canadians, the city councillor and retired telecom executive was shocked and outraged when Russia invaded neighbouring Ukraine in late February

While many Canadians have decided to show their support for Ukraine by boycotting Russian products such as vodka, Sasseville decided his best weapon against the Russians was the location of his home — directly across from the Russian consulate.

Most days since the Russian invasion, he said people demonstrated in front of the building and would leave behind signs, Ukrainian flags and lit candles in protest.

But after they left, he was frustrated to see consulate employees inevitably rush out to clear it all away as if nothing had occurred.

“I thought to myself, ‘They can’t rip away things on my house.’ I wanted to find a way to have a permanent public demonstration of opposition to the war right in front of the Russian consulate,” he said.

“What’s happening in Ukraine is so serious that I feel morally obligated to do what I’m doing. This conflict is really hitting home for me,” he added.

So last Saturday, he bought four Ukrainian flags that he promptly displayed over the four windows of his home directly facing the consulate.

“They can’t rip those away,” he said.

He then posted a picture of his home on social media and was astounded to see it go viral within hours, with hundreds of people liking and sharing the images mainly on Twitter and Linkedin.

But two days later, Sasseville said he opened Twitter to find “hundreds” of new “hateful” replies attacking him. All of them seemed to be from anti-vaccine, anti-French President Emmanuel Macron and pro-French far-right politician Éric Zemmour accounts, none of which claimed to be in Canada.

“Their comments were ridiculous… they called me things like ‘neo-Nazi’, ‘woke’. I don’t know how I ended up the target of the anti-Macron, anti-vax crowd,” Sasseville said.

“It affected me. The hate and the violence in what they were saying really impacted me,” he added.

Despite sudden vile social media messages, Sasseville says he has no intention of stopping his musical protest.

“I’m going to do it again tomorrow,” he said Friday, “and as long as I need to.”

He can seemingly depend on the support of fellow Montrealers as well.

Minutes after the interview with National Post, Sasseville went out in front of his house and bumped into protesters who said they were “inspired” to follow his lead by blasting the Ukrainian anthem out of their car speakers. He then posted a video of it on Twitter.