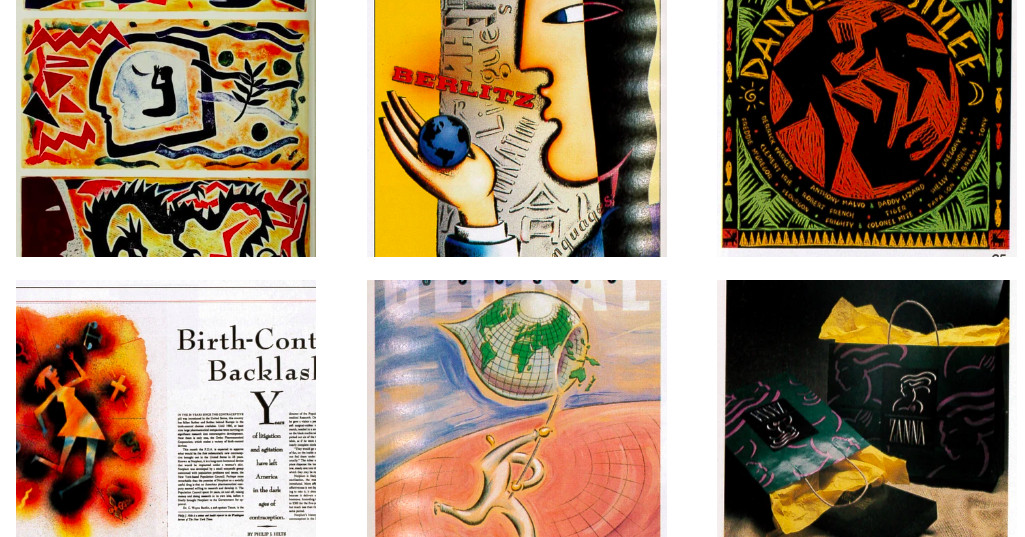 There is a mural at the bagel shop in my hometown that haunted me as a child. It is massive and square, composed of blob-like humanoid shapes in shades of rust and orange with tiny faceless heads, all of them inhaling swirls of piping-hot java. I remember thinking that it was sort of threatening, but what I did not realize at the time was that it was part of a much larger and slightly insidious graphic design trend with an on-the-nose name: Global Village Coffeehouse.

It was TikTok where I learned this, thanks to a video by a woman who goes by the moniker Melina Bee and who has made dozens of videos explaining similarly niche graphic design and architectural aesthetics. Global Village Coffeehouse, for instance, is the term for late ’80s-late ’90s graphic design that combines the appearance of handcraftedness with ancient or tribal imagery, often with earth tones and vaguely nature-oriented motifs like trees, suns, and waves. It’s since been regarded more cynically as a way for corporations to profit from the look and feel of grassroots movements. It, she says, was the reason she started making the videos in the first place:

“My jaw just dropped,” she says of when she first discovered the term. “I had to share it with a friend who’s also like me, very visual, and I was like, ‘Did you know this is a thing?’” Since her first viral hit about the Camden bench and hostile architecture in March 2021, Melina has become known as the go-to source for design trends you know visually but perhaps don’t have the words to describe. While her background is in architecture and historic preservation, she credits a volunteer collective called the Consumer Aesthetics Research Institute for coining and curating many of the styles, which range from the 1950s diner favorite “Googie” (think retrofuturist “Space Age” architecture) to the ’90s New Age-y “Zen-X” (think Sting doing yoga).

We chatted about the ever-quickening speed of trend cycles and whether there were some styles that were too awful to ever revive, among other fun new words (“Whimsigothic!” “Frasurbane!”).

How’d you get into design history?

I have a master’s in historic preservation with a focus on craft material and design, which is more architecture-based, there are a lot of overlapping principles [with design history]. Last summer, I stumbled on something called the Consumer Aesthetics Research Institute (CARI) on Reddit, and discovered a style they called Global Village Coffeehouse. And there was this other one called “Whimsigothic” And I was like, boom. Each one of us fits into one of these aesthetics at times.

What was your first microstyle video to go viral?

The first was on Frasurbane, which ironically is not a style I’m personally into, but it really resonated with people. Once you recognize it, you’re like, “Oh my god.” I have all these moments like that, especially with a style called Gay Nineties Revival. When I read about that, I was like, “I have tons of ’70s stuff thinking that it was ‘so ’70s’ but it’s actually ‘’70s Gay Nineties Revival.’”

How much research goes into a single video?

Usually a lot. I always get the comment, ‘How do you know all this?’ And it’s like, I don’t, I researched it. Sometimes I do already know because of my architectural background, but it’s a minimum of one and a half to two hours. Research is sometimes not a linear path. I have to read some facts and sit with them for a while to contextualize them, so it can actually be like a few days or even weeks.

How do you know whether a trend mandates its own microstyle?

I cannot stress enough the importance of the Consumer Aesthetics Research Institute here. They don’t come up with all of the names — Gay Nineties Revival was actually coined in the 1920s — but some of these microstyles have come from Facebook groups. One of my personal favorite styles is Utopian Scholastic, which came from a Facebook group called “Utopian scholastic designs from a pre-9/11 world.” I find that so poetic. Every science museum is still in that style; there’s something to it that speaks to a curiosity for the world.

Are there any microstyles that you expect we’ll never see echoes of again? Like, are some design trends just too ugly to repeat?

Most people throughout history take inspiration from what they’ve seen. But I do feel like you don’t see a lot of Global Village Coffeehouse anymore. Evan Collins [co-founder of CARI] has written an amazing essay on this. The style doesn’t echo the values of younger people today.

There are some that I don’t want to see come back, honestly. One of them is from the 2010s, which CARI calls “Boho Chic.” That’s one that makes me cringe because it’s just a lot of ripping off motifs from indigenous cultures. I think we’re trying to move past that as a society.

In one of your videos you were saying how when we talk about Y2K being “back,” what we’re really talking about is a very specific style associated with it. We definitely pick and choose what we want to rediscover, so what are some of the things that we’ve forgotten about from that era?

Y2K and McBling are pretty different: one is very ostentatious and busy and the other is a very sleek, bold minimalism. It’s interesting how things get conflated. When we’re talking about the past, in many ways, we’re actually talking about us in the present. There’s a lot of wondering, “What are we skipping over?” Will “Hipness Purgatory” make a comeback? I can’t tell.

Speaking of, every time I have a conversation about Y2K, we’ll then start talking about what it’ll be like when the early 2010s comes back — “Indie Sleaze,” or the American Apparel aesthetic, for example. But it’s sort of like, if we’re already predicting what’s going to be a trend soon, does that make it less authentically stylish? Are we too aware as a culture of trend cycles in order for them to be meaningful anymore?

The cycles have become shorter, and the other thing that’s very interesting is throughout most of the study of history, accessing history was very limited. Records were in physical buildings, but they might be ruined by the time you’re looking at it. But now, we have everything. You can look at a Tumblr blog from 2010 right now, or watch old movies. Our cultural memory in some ways is a lot busier and more accessible.

What do you hope people get out of watching your videos?

What I really hope for is to make people more sensitive to the visual environment around them. When you learn about architecture, you can walk past a street and read it in a way. I’ve had friends describe taking a walk with me as reading the landscape, and I wish to give that skill to others.