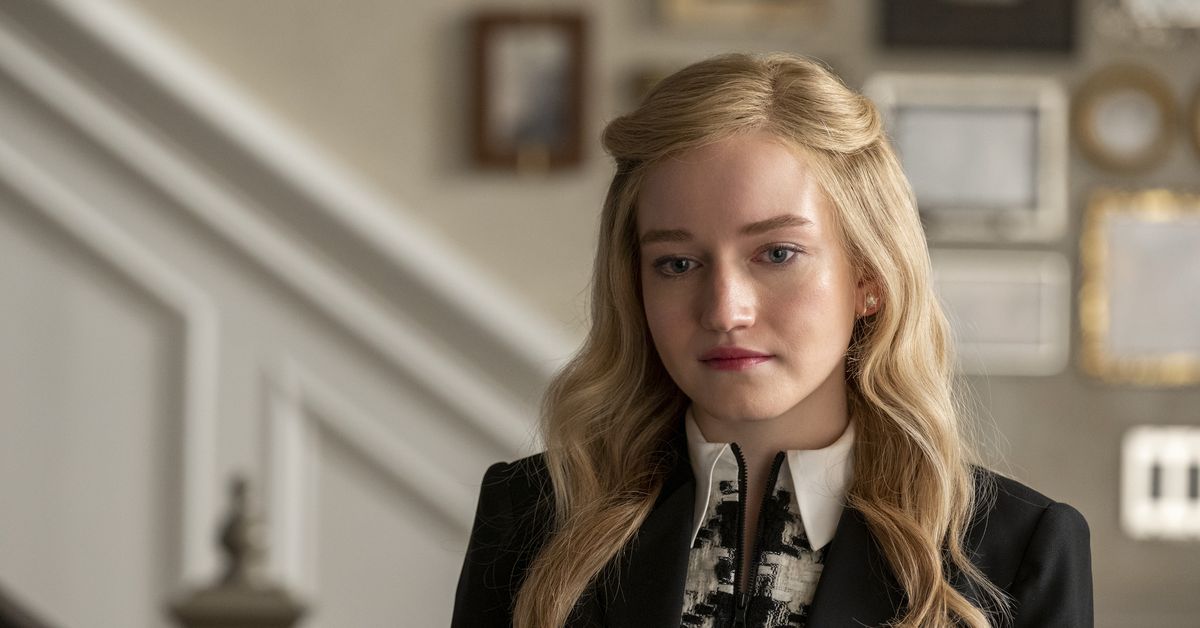 In the weeks leading up to the premiere of Inventing Anna, a nine-part series about the ersatz heiress Anna Delvey, Netflix’s marketing team posted a giant receipt on one of the perimeter walls of the Gansevoort Hotel.

The bill included, among other things, three bottles of Dom Perignon totaling $6,300, five bottles of Domaine Ponsot at $9,750, 12 orders of a dozen oysters each which cost $288, and four orders of foie gras at $240. Next to it was an equally large poster of star Julia Garner as Delvey, with a line proclaiming in all caps: “SPENT $36,000 ON A SINGLE DINNER. BUT NEVER PAID THE BILL.”

It was a well-chosen marketing tool; Delvey’s story, which was first reported in New York magazine in 2018 by journalist Jessica Pressler, focuses heavily on the ways Delvey financially terrorized New York’s most stylish hotels and socialites. The poster tactic was downright ingenious, as far as I was concerned, since it was located directly on my daily lunchtime walk. While carrying home my overpriced salads, I’d fantasize about indulging in the show, watching someone scam their way into luxury and guzzle down all that champagne.

Sadly, though, Inventing Anna, isn’t as good as its poster.

The show certainly provides indulgence (if maybe not enough for my taste). Its failure is in the framing of Delvey’s story: It’s depicted as a quasi-feminist, girlboss-adjacent revenge fantasy. Delvey does the things she does, we’re told, because she’s a product shaped by society’s ills — narcissism, sexism, capitalism, all the -isms — coupled with the knowledge that the game of wealth is rigged, stacked against all of us.

The show almost seems to be capitalizing on the Robin Hood spirit of Hustlers, the 2019 hit movie about a cabal of strippers who, with the aid of some illicit drugs, roofied their banker clients and maxed out their credit cards. Hustlers, which was also written by Pressler for New York magazine, operated as a critique against capitalism and the hollowness of the American Dream, showing how a particular group of seemingly powerless women maneuvered through the 2008 financial crisis that threatened to swallow them whole.

Inventing Anna wants that same result, but with half the work. The series goes to great lengths to tell us (but never really show us) how sexism, elitism, and inequality are barriers that keep regular folks from ever becoming rich. The show can’t seem to decide if Delvey is a revolutionary feminist or someone who just wanted the money; if her wins were derived from supernatural charisma and intelligence or the result of corrupt systems too impressed with displays of wealth to do their due diligence.

However unsure, it’s ultimately willing to embrace themes of heroism and radical self-empowerment. By the end, as a group of reporters literally cheers for Delvey’s court successes, one thing is clear: It expects we’re all rooting for her. The show is too willing to conflate these qualities with heroism and nobility, rather than allowing its protagonist to be someone who just wanted the money.

Perhaps the soft-pedaling makes the scams feel less icky for viewers, or maybe it’s an overcorrection of Hollywood historically being too quick to paint real-life women as villains. But what it does show is that Inventing Anna just isn’t equipped to tell this story.

Inventing Anna wants to gaslight, gatekeep, and girlboss the art of grifting

In seemingly every single one of the nine episodes of Inventing Anna, a character — usually Vivian Kent (Anna Chlumsky), who is based on Pressler — talks about how Delvey has a special talent for swindling her rich friends. Kent discusses this talent with Delvey’s defense lawyer. She wonders about Delvey’s brilliance aloud to her writer friends in “Scriberia” (a term for the corner of the office she and other writers occupy). She argues with her editor, and with her husband to the point that marriage counseling is perhaps needed, that this is what makes the Delvey story worth covering.

In other words, Delvey is somehow singular and special, and that makes her more than just a thief. And the flipside of this assertion is that grifting for the sake of grifting — or, more to the point, for survival — is ignoble.

Many of the episodes flank arguments about Delvey’s culpability with allusions to sexism that she and other women face. Her boyfriend Chase has no problem raising money for his futile projects; her defense lawyer points out that Frank Sinatra famously scammed people, too. She’s looked down upon by rich women (one treats her like a full-time assistant) who have seemingly shut the door behind them and perpetuate systemic inequality.

Delvey’s scam is positioned as a victory over said sexism because the harm she does is focused on the people who run the system. There’s something honorable in her grift, the show seems to argue, and if you don’t agree, you might be a bit sexist. By the end, characters are either Team Anna, or they’re painted as shrews and simpletons. The latter, like an actual heiress who appears early in the series, are easily disposable, as are their opinions on Delvey’s thievery. Her remaining friends defend her vigorously.

This is all shown to be a lie through the character of Rachel, based on Rachel Williams, who wrote her personal story for Vanity Fair before Pressler’s article was published. Rachel is by no means impoverished, but she’s not nearly as wealthy as the society matrons Delvey bilks early on. The show paints her as a weak-minded wannabe who sold out her friend for profit.

Delvey convinces Rachel to put a $60,000 Moroccan hotel stay on her work credit card, with promises to repay her. This is the fraud that gets Anna caught, and there’s a particular cruel joy to how she’s treated in the trial: humiliated on the stand for taking profitable television and book deals despite not being painted as talented, smart, or charming — not being Anna, essentially. (Netflix famously did not buy the TV options to Rachel’s account, while Delvey was reportedly paid some $320,000 for her film rights.)

In the final episode, Delvey’s defense lawyer and the journalist Kent lament that they’ve taken advantage of Delvey, suggesting that she might be the real victim of this hoopla. The lasting impression of Inventing Anna is less an account of Delvey’s story than a revenge story.

The frustrating part of Inventing Anna’s narrative is that it feels so simple, as if the jagged, unpleasant edges of this woman’s life have been smashed down to fit the mold of “misunderstood famous woman” that’s overtaken television and pop culture. A major component of movies like I, Tonya, recent documentaries about Britney Spears and Paris Hilton, a reexamination of Janet Jackson’s legacy, and shows like Ryan Murphy’s Impeachment and American Crime Story, is the idea that these women were all misunderstood victims and that observers were complicit in their downfalls.

While Delvey likely was a victim in some ways, and was perhaps unfairly mocked, I do wonder about how her character in Inventing Anna has been sanded down (something that can happen with the subjects of those other stories, too) to fit into this mold of storytelling, with this unsatisfying payoff. The show seems to combine a fairly accurate portrait of Delvey — a slippery figure — with a narrative viewers can embrace.

It’s not that there isn’t satisfaction in a revenge plot. This was what made Hustlers, after all, such a great watch: We like to be assured that rich people can be idiots and aren’t impervious to consequences. That movie deftly asks the question of why it was that the men who caused the financial crisis were able to recover just fine, while average people like Ramona — and, presumably, the viewer — weren’t allowed that same privilege.

Inventing Anna, on the other hand, leans on that sort of argument with no depth. It manages little beyond confidently asserting that there’s more to Delvey’s story, suggesting that it can show more truths about capitalism in America than one might know. I’m just not sure the show’s choice — to launder Delvey’s story with the suds of honorable feminism and a whiff of misunderstood genius — gets there.