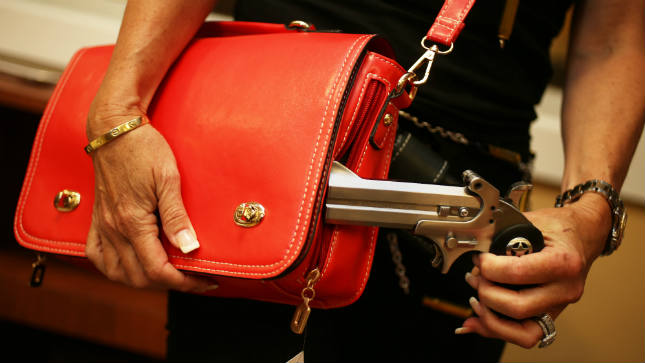 When the six conservatives on the Supreme Court struck down New York’s century-old Sullivan Act, requiring a license to pack a pistol on the street, alarmed New York legislators were perplexed as to what to do.

The venerable Sullivan law required “proper cause” to obtain a gun carry permit, and the Supreme Court held that this violated the Constitution’s guarantee of the right of the people to keep and bear arms. So, New York enacted the Concealed Carry Improvement Act, to become effective Sept. 1, which may court even more litigation for the justices to fret about.

The new measure, containing 21 pages of carefully drafted verbiage, provides for pre-licensing background checks, mental health, social media screening and training in the use of a firearm, all of which will probably pass muster.

Some New York locations are off limits to guns, period. For example, the legislation says, “the area commonly known as Times Square” will be gun free. But there are a host of practical problems. Does Times Square, “crossroads of the world,” mean the corner of Broadway and 42nd Street, the entire theater and business district nearby or something else? And if I can carry a gun legally on Broadway and 43rd Street, what do I do with it if I want to cross the border to 42nd Street? Central Park, like all New York state parks, is also off limits. Central Park, hosting 42 million visitors annually, comprehends 843 acres of Manhattan.

All private property, and places where liquor is served, is to be presumptively gun free. This would include stadiums, train stations, airports, theaters and the Empire State Building. But the property owner at the risk of social ostracism may post a sign saying, in substance, “guns are welcome.” So now there will be signs all over the state, insufficient to transmit the message to the blind, the illiterate or the non-English speaking, indicating whether or not guns are permitted inside.

As Justice Clarence Thomas made clear in New York State Rifle & Pistol Association v. Bruen, blanket bans in public buildings and, of course, courthouses are kosher. Federal law makes it a criminal offense to “knowingly possess… or cause… to be present a firearm or other dangerous weapon” in or near a federal courtroom But for us lesser mortals, anyone you meet on the street or pass in a car may be legally armed and possibly dangerous.

The Second Amendment to the Constitution, which Thomas in 2018 called a “constitutional orphan,” has now discovered its parentage. The amendment on its face protects the existence of “well regulated” militias, not unregulated private armories. But the conservative justices, who profess to be “textualists,” ignore that language and see a personal right to keep and bear arms baked into the founding document. Another conservative judge, the late Chief Justice Warren Burger, famously said that this interpretation of the Second Amendment “is one of the greatest pieces of fraud that I have seen in my lifetime.”

While hunting as a sport is down in the United States, the number of guns in private hands has spiked by more than a third, to 120 guns per 100 Americans. And, post Bruen, this figure is sure to balloon even further. More licensed guns mean more guns on the street and more guns in the hands of criminals, who may acquire them illegally by gift, sale or theft from licensed gun owners.

The National Rifle Association and the rest of the gun lobby have historically argued that guns do not kill people, people do that. Gun owners say that they need to have guns for their self-defense — to protect themselves from unforeseeable aggressors or to take up arms against the government. With almost 24,000 Americans dying this year as the result of gun violence, the gun lobby argument is as easy to demolish as shooting fish in a barrel.

All this evidences the militarization of American society. Assault weapons, capable of mass killings in the blink of an eye, were once illegal. Now they are readily available and are selling like hotcakes.

The six conservative justices have not thought it through. The court’s decision is virtually impossible to administer. The practical problems are enormous. If I can legally carry a revolver in my pocket and capriciously decide to approach a “sensitive location,” what do I do with the gun before entering?

And, if I can legally keep a gun in my apartment, and legally carry it on the street, how do I legally carry the weapon through the halls and public areas of the building without violating the law? The law says no guns on private property unless the landlord says OK.

What about guns on college campuses, where the cancelationists are clashing with the traditionalists and the wokesters are inhibiting the free speechers? The new law makes a “sensitive location” any “grounds, owned or leased of any educational institutions, colleges and universities.”

But how is this to be policed? As Justice Elena Kagan observed during oral argument in Bruen, many universities such as New York University have multiple campuses and multiple buildings separated by public streets.

And what of the burden on the police? It used to be that an officer, seeing someone with a bulge in his pocket in a high-crime area late at night, could “stop and frisk” the suspect for unlicensed weapons. But how does the cop distinguish between a licensed bulge in the pocket and an unlicensed one? Erased is the requisite “reasonable suspicion” that a crime is being committed.

The trio responsible for high inflation

Meanwhile, we can expect legal battles over how much signage is permitted and where it is to be placed. New York may become a thicket of “NO GUNS” and “GUNS WELCOME” signs obscuring the old “MEN WORKING” and “BUILD WE MUST FOR A BETTER NEW YORK.”

James D. Zirin is a former federal prosecutor in the Southern District of New York.