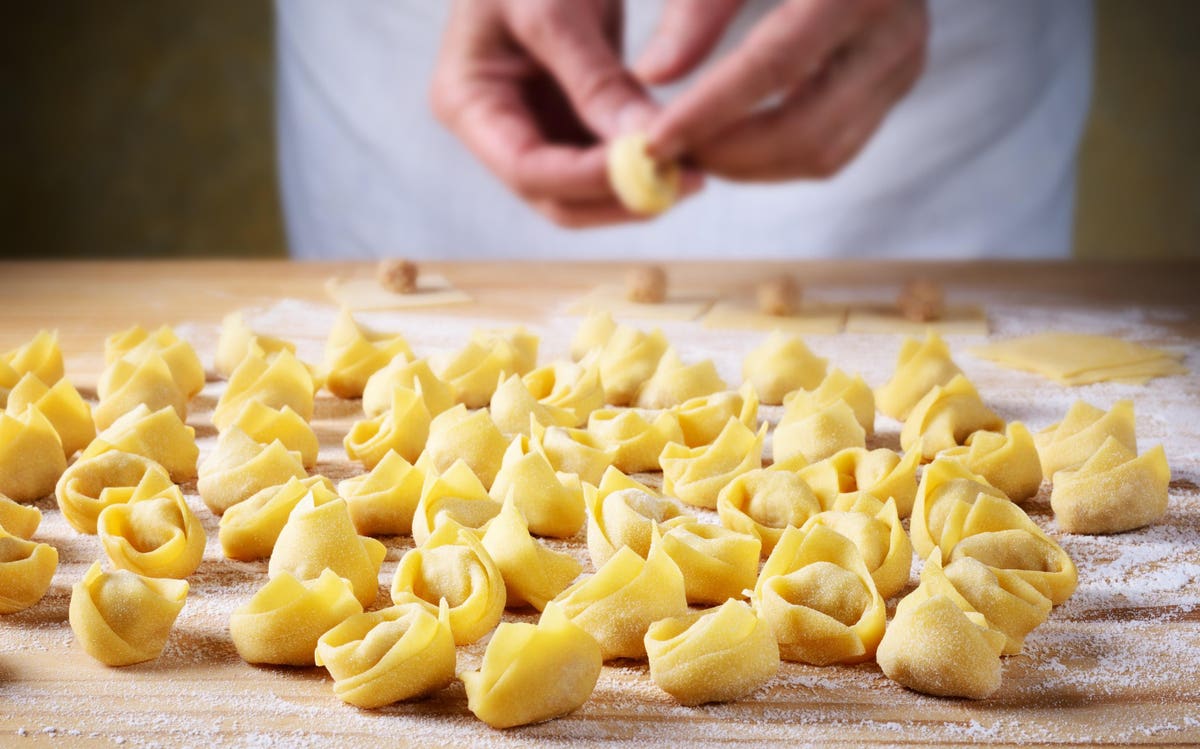 As it nears Christmas, posts begin to appear on my social media pages of floured tabletops covered with hundreds of tiny cappelletti. This small stuffed pasta is ingrained in festive food traditions in the northern Italian region of Emilia Romagna. But the process of making the dish also carries important social significance by bringing together families, communities and generations.

Being a cappelletti novice, I tune in for a lesson on making the festive pasta by cooking school Casa Artusi, based in the southern “Romagna” area of Emilia Romagna. Mattia, who is hosting the class, reminds us outright that, “There can be no Christmas celebration in Emilia Romagna without cappelletti in brodo.” The cheese or meat-filled pasta swimming in a rich broth is a staple of the region’s Christmas lunch. For inhabitants here, cappelletti have also become a symbol of tradition, heritage and Christmas spirit.

As Sara, another participant in the course, recalls, “When I was younger, we made cappelletti all together as a family and each of us was assigned our role in the process.” As I discover throughout the nearly two-hour lesson, that process is complex. We begin with the broth, which is just as central to the dish as the pasta and has its own honored place in local cooking. As Mattia says, “As long as there is broth there is hope, there is something to put on the table.” In the past, for the poor inhabitants across the region, broth would have been at the heart of home cooking and the first thing to ensure was available. As Mattia puts it, “broth unites the region.”

The broth we prepare is made from a capon, a castrated rooster, to give a richer, fattier flavor. But family recipes vary and depend predominantly on what ingredients were to hand. We follow the recipe of Nadia, who is demonstrating the dishes along with Corrada, both veterans of the art of cappelletti in brodo.

Corrada takes center stage as we move on to preparing the pasta dough. The cappelletti recipe we are following is from the 1891 cookbook of Pellegrino Artusi — after which the cooking school is named — entitled “La scienza in cucina e l’arte di mangiar bene” (“Science in the Kitchen and the Art of Eating Well”). Corrada could clearly make pasta in her sleep and her deft hands are already beginning to form a smooth dough before I’ve even cracked the second egg (Mattia reminds her to “try to go slowly” for us amateurs).

While the pasta rests, we turn to the filling. We use capon again, with ricotta cheese, parmesan, nutmeg and a pinch of lemon zest. For the filling, like the broth, there is no single agreed-upon recipe. Some cappelletti are stuffed only with cheese (whatever is local) while another meat option is pork loin. As Mattia explains, this makes cappelletti a prime example of home cooking. “The rules of cooking at home do not mean following recipes to the letter, but instead following the tastes of the family,” he says.

In fact, the varied recipes of cappelletti often become a kind of family story, rich with memories of the past and of festive moments. “Our experience can infinitely enrich our culinary traditions,” says Mattia. As we move on to forming and filling the pasta parcels, Mattia notes that this part, too, differs between zones and families. In some areas, for example, the border of the pasta shapes is smooth while in others they use a cutter to create a frilly edge.

The assembly and closing of the pasta shapes is a moment of great significance in Emilia Romagna. Nadia recalls her childhood when, on Christmas Eve as per tradition, she would make cappelletti with her mother and grandmother. “It was magic,” she says.

Still now, generations come together to take on the various roles of cutting the pasta circles, adding a spoonful of filling, and folding each into a half-moon. The final stage, the closing of the pasta parcels, is the most important and entrusted only to the most experienced member of the operation. Children still watch in awe as grandmothers twist and press closed the cappelletti with speed and accuracy born of well-trained fingers.

Despite the sad modern-day tendency for time-consuming and laborious dishes to be abandoned, cappelletti making continues to be a much-anticipated event of the Christmas calendar in Emilia-Romagna. For Nadia, it is now a moment to spend time with her grandchildren and pass on the art, while for Mattia is it a way to relive nostalgic childhood memories. For me, it is the beginning of a new Christmas tradition.