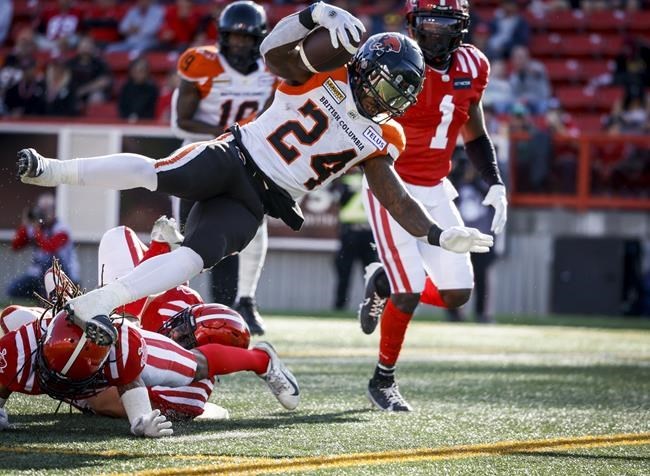 CALGARY — James Butler scored a pair of rushing touchdowns, including one in overtime, for the B.C. Lions in a 31-29 win over the host Calgary Stampeders on Saturday.

The Lions (9-3) held onto second place in the CFL’s West Division, two points up on the Stampeders (8-5) in third and six points back of the front-running Winnipeg Blue Bombers (12-2).

Quarterback Vernon Adams Jr. completed 25 of 32 passes for 294 yards in his first start as a Lion since he was acquired Aug. 31 in a trade with the Montreal Alouettes.

His backup Antonio Pipkin scored a rushing touchdown and added a two-point convert in overtime.

B.C.’s Sean Whyte kicked field goals from 38, 30 and 14 yards in front of an announced 22,319 at McMahon Stadium. Receiver Dominique Rhymes compiled 91 receiving yards to reach over 1,000 this season.

The Lions improved to 2-0 versus Calgary this season. The two clubs meet again in Vancouver on Saturday.

Jake Maier went 26 of 38 in passing for 301 yards and three touchdown throws, but Maier dropped to 2-2 in starts since supplanting Bo Levi Mitchell as Calgary’s starting quarterback last month.

Maier threw touchdown passes to Malik Henry and Luther Hakunavanhu, and another to Jalen Philpot in OT.

Butler scored his second major of the game on B.C.’s first overtime drive with an eight-yard dash. Calgary’s offside penalty gave B.C. a second attempt at a two-point convert, which Pipkin converted with a two-yard dash.

Calgary countered with Maier throwing a four-yard touchdown throw to Jalen Philpot in the end zone. The Stampeders challenged Maier’s incomplete pass to Begelton for two points, but the officials ruling against it sealed the win for the Lions.

Rene Paredes kicked field goals from 38, 37 and 13 yards, but was wide left on a 48-yard attempt with 23 seconds remaining in regulation time.

Whyte’s 14-yard field goal put the Lions up by a converted touchdown with five minutes remaining in the game. Calgary drew even with two minutes to go when Maier found an all-alone Hakunavanhu in the end zone with an eight-yard throw.

The ball in Calgary’s hands in the final minute, Maier navigated the offence to the 48-yard line for a Paredes attempt, which he missed.

Calgary couldn’t convert a first down from 22 yards out into a major early in the fourth quarter. The Stampeders settled for Paredes’ 13-yard chip shot to trail by four points.

Pipkin scored on his third attempt after the backup quarterback was twice repelled by Calgary’s defence.

Whyte’s 30-yard field goal early in the second half drew the Lions even at 13-13.

With B.C. threatening from Calgary’s 21-yard line late in the second, Stampeder linebacker Cameron Judged hunted down a scrambling Adams, forced the quarterback to fumble and collected his league-leading fifth recovery this season.

A Paredes’ 37-yard field goal with 12 seconds left in the half gave the hosts a 13-10 lead heading into the third quarter.

Maier and Henry combined on a 77-yard touchdown early in the second. Henry outsprinting coverage downfield hauled in an over-the-shoulder catch and headed for the end zone for his eighth touchdown this season. A Paredes convert tied the game 10-10.

B.C. exploited Calgary’s 35 yards in penalties over the game’s first six possessions. The visitors turned advantageous field position into a touchdown on their opening drive with James Butler scoring on a 10-yard run.

The two clubs then traded 38-yard field goals for the Lions to lead 10-3 after one quarter.

This report by The Canadian Press was first published Sept. 17, 2022.