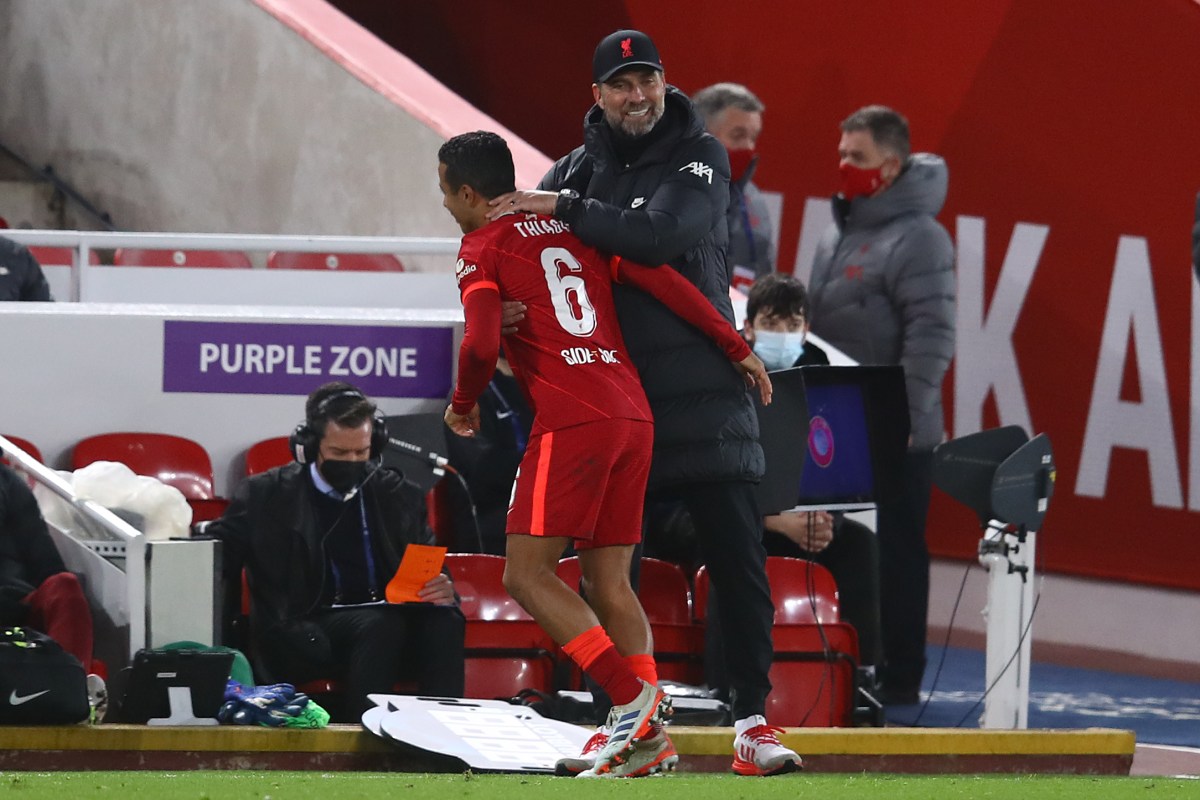 Jurgen Klopp hailed Thiago Alcantara’s ‘thunderball’ goal as Liverpool made it five wins from five in the Champions League group stages against Porto.

The 30-year-old broke the deadlock with a sublime low, first-time, 25-yard half-volley which was subsequently added to by Mohamed Salah’s sixth European goal of the season.

It was only the second time Thiago has found the net during a disrupted 14 months since arriving in a £20million move from Bayern Munich but it was a strike worthy of the wait.

“We had bigger chances in the game but we scored with that situation,” he said of the midfielder’s 52nd-minute opener.

“Whoever sees Thiago in training knows he has the technique to do it but even with this technique it doesn’t happen constantly that he can fire such a thunderball.

“It was good timing, a great goal.

“We needed some luck in moments; they (Porto) came through and had big chances counter-attacking which were tricky to defend but didn’t score and we scored twice and controlled the game in the second half much better.”

Despite there being nothing riding on the game for Liverpool, who had already qualified for the last 16, Klopp named a stronger-than-expected side with just four changes from Saturday’s win over Arsenal.

However, the night worked out perfectly as in addition to maintaining their 100 per cent record in the group stage he was able to manage his squad.

“We had a lot of things to think about: who came back from injury, who played a lot of games, who needs resting,” he added.

“For this game no one felt like they needed a rest, it is just the amount of games coming up so we need them all in kind of a rhythm so that is why the line-up made real sense.

“It worked out really well because no one got injured, so everything is good.”

Liverpool have made a mockery of their so-called ‘Group of death’ with their 15-point haul a club record for the group stage but Klopp said now was not the time to assess just how well they were playing.

“We could have lost this game tonight, we gave chances away when they could have scored so we should not make too much of it as we were lucky in moments,” he said.

“We had moments when we were not cool to play against; I didn’t expect that tonight because we changed decisive things to be honest.

“We didn’t expect the boys to be a pressing machine immediately but to grow into the game and that’s what happened.

“A lot of good things happened tonight but I’m not sure we should make the mistake of saying we are this or that again.

“We will know at the end of the season – but we are in a good moment and we should try everything to keep that going.”