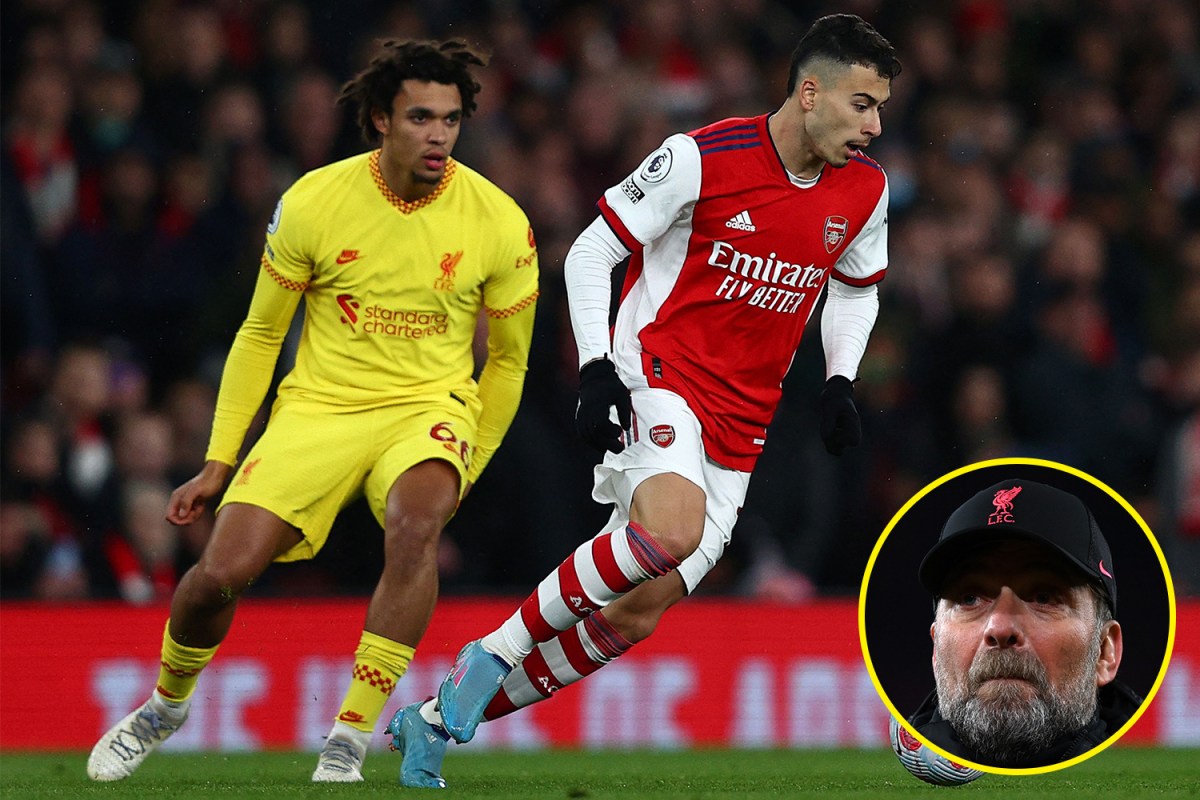 Jurgen Klopp has reiterated his admiration for the ‘talented’ Gabriel Martinelli following Liverpool’s win over Arsenal.

Liverpool showed their class at the Emirates Stadium as second-half goals from Diogo Jota and Roberto Firmino sealed them a 2-0 win.

But before Jota’s 54th-minute opener, Arsenal more than held their own and caused the Reds a few problems.

One of the Gunners’ brightest sparks was Martinelli, who out on the Arsenal left had an intriguing battle with Liverpool right-back Trent Alexander-Arnold.

The Brazilian got the better of Alexander-Arnold a few times in the match, however, Klopp was very happy with the efforts of his player.

Klopp added that anyone who doubts Alexander-Arnold’s ability to defend risks the wrath of the German.

“Both teams had spells of possession where the other team was patient, closing the centre, didn’t want to step out but we had to,” Klopp told Sky Sports.

“In the moment where we defended forward like in the second half, when the wingers defended the width. Apart from the diagonal balls to Martinelli, which Trent defended incredibly.


When Southgate will confirm England squad with Olise, Burn and Elliott in contention


Rudiger and Lukaku out, loans stars and wonderkid in – new-look Chelsea next season?

“Martinelli is such a talented boy. It’s really tricky.

“If anyone says Trent can’t defend, they should come to me and I’ll knock them down. I cannot hear that anymore, I don’t know what the boy has to do.”

Klopp is a huge fan of Martinelli having previously labelled the Arsenal star the ‘talent of the century.’

And Martinelli’s performance against Liverpool has Arsenal superfan Piers Morgan ever so slightly worried about the 20-year-old’s future.

Morgan tweeted: “On a solitary positive note, @gabimartinelli was brilliant. Just hope he wasn’t so brilliant that Klopp nicks him.”

888sport: Deposit min £10 using promo code 888ODDS • Bet £1 on your selection at normal odds in the regular market • If your selection wins, we’ll pay you out at the normal price and any extra winnings from the advertised enhanced price will be paid to you in Free Bets • Free Bets are granted within 72 hours and expire after 7 days • Restrictions apply to withdrawals, payment methods and countries & Full T&C’s apply 18+ Begambleaware.org