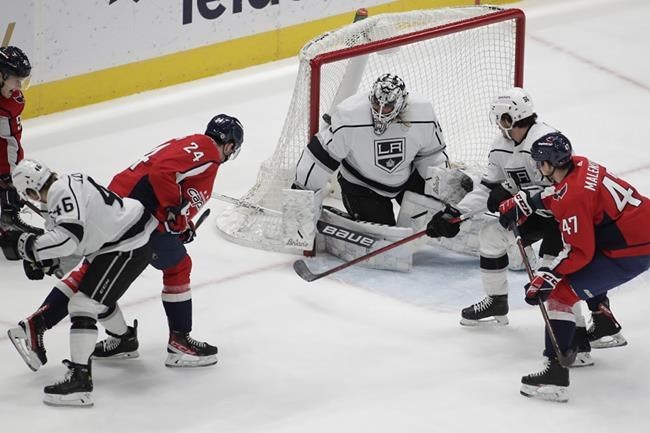 WASHINGTON (AP) — Adrian Kempe scored the tiebreaking goal midway through the third period to give the Los Angeles Kings a 3-2 win over the undermanned Washington Capitals on Sunday night.

WASHINGTON (AP) — Adrian Kempe scored the tiebreaking goal midway through the third period to give the Los Angeles Kings a 3-2 win over the undermanned Washington Capitals on Sunday night.

Washington was missing forwards Nicklas Backstrom, Evgeny Kuznetsov, T.J. Oshie and Michael Sgarbossa, all on the COVID-19 list. Oshie was placed on the list earlier Sunday, and Sgarbossa was a late scratch.

Garret Sparks, recalled from the minors before the game, stopped 33 shots for his first NHL win since March 20, 2019.

In January 2019, Sparks suffered a concussion in practice with the Toronto Maple Leafs and has struggled ever since.

“It’s been a long road back here,” Sparks said. “I’ve been through a ton. I got to step into a situation where they needed me.”

“He’s had some real highs and some real lows,” McLellan said. “For the group to play hard and come back with him, I think for him, and he in turn, playing as well as he did tonight, it’s a chapter in a book.”

Blake Lizotte scored short-handed and Christian Wolanin also had a goal for the Kings, who trailed by two late in the second period.

“I don’t know if it turned the tide, but it certainly at the end of a period like that, it puts them on the board, it gets them some energy and some life and a possibility,” he said. “We just let our guard down, so we needed to do better than that.”

Connor McMichael and Justin Schultz each had a goal for Washington.

Kempe’s 12th goal of the season, which fluttered off his stick in front of the net, beat Vitek Vanecek, who made 21 saves.

The Capitals had won their last five games against the Kings.

Washington took the lead at 7:58 of the first on McMichael’s fourth goal, which was assisted by Joe Snively, a native of nearby Virginia who was making his NHL debut.

Schultz’s second goal of the season, his first since opening night, came a second after a four-minute power play expired to give Washington a 2-0 advantage at 13:47 of the second.

Sparks said the concussion was a life-changing experience.

“I was having a really good season, and it kind of derailed my season there, and the wheels just fell off,” he said. “You’ve got to work your way back. I was starting in the East Coast League this time last year. I was making $600 a week. I was having a good time. It was crazy to be on NHL ice again, playing against the greatest goal-scorer of all time and having an answer.”

CHEERING FOR THE CAPS

Snively grew up going to Capitals games but said he had other thoughts while playing.

“I wasn’t really thinking about that too much. I was more focused on the game,” he said.

NOTES: Washington forward Tom Wilson missed his fourth straight game with an upper-body injury. He was at Sunday’s morning skate but wore a non-contact jersey. He’s been placed on injured reserve. … Capitals forward Garnet Hathaway was activated from the COVID-19 list. He assisted on Schultz’s goal. … Linesman Julian Fournier was unavailable for the game, which was officiated by two referees and one linesman. … The Kings placed forward Phillip Danault on the COVID-19 list.