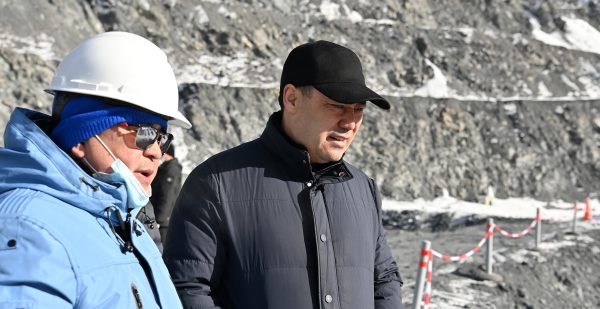 Seven months after the Kyrgyz state seized control of the lucrative Kumtor mine from the Canadian firm Centerra Gold, the company has confirmed that it finally entered talks with Bishkek. Last summer, Centerra complained that Bishkek was refusing to engage in negotiations.

According to a company press release dated January 3, “Negotiations with representatives of the Kyrgyz Republic are ongoing, and there can be no assurance that any proposed resolution will be consummated or as to the final economic and other terms and conditions of any such resolution, if agreed.”

The Kyrgyz parliament passed a law in early May [2021] allowing for the imposition of “external management” on companies with mining concession rights that are found to be violating environmental protection and safety obligations. Conveniently, on the same day the bill was passed, a Kyrgyz court issued a $3 billion fine to Centerra’s Kyrgyz subsidiary following a suit by four private citizens (one of whom was the son of the head of Kyrgyzstan’s State Ecology and Climate Committee) on behalf of Kyrgyzstan seeking reparations for the mine’s past environmentally damaging practices. Then Kyrgyz tax authorities said the company owed $170 million in back-taxes.

The onslaught culminated in the Kyrgyz government seizing control of the mine on May 17.

Centerra filed for Chapter 11 bankruptcy in the United States on behalf of its two Kyrgyz subsidiaries — Kumtor Gold Company and the Kumtor Operation Company — “to protect the interests” of the company and “prevent any further efforts by the Kyrgyz Government to strip” the mine of its assets.

As 2021 came to a close, the Kumtor saga seemed stuck. Arbitration can be a very long process, so there were no clues as to how long it could drag on.

In December 2021, Kyrgyz authorities announced that they were suing Centerra over the company’s alleged blocking of user and administrator access to Kumtor’s computers from May 2021. The company pushed back, saying that “Centerra’s global IT systems restricted user access to preserve the integrity of the organization’s global IT infrastructure and its confidential information” but did nothing that put the mines’ safe operation at risk. Around the same time, news emerged suggesting that the mine’s revenues were down significantly.

In its recent press release, the company confirmed that it is in talks with Kyrgyz authorities toward an out-of-court settlement of their dispute. But the mere fact that talks are happening does not mean a resolution will come quickly or easily. Centerra’s demands set a high bar.

The press release laid out five expectations with regard to any resolution of the conflict. These include the return of state-owned mining company Kyrgyzaltyn’s shares in Centerra, which Centerra would then cancel. Kyrgyzaltyn is presently Centerra’s largest single shareholder, with a 26.1 percent stake in the company. Centerra also said that it would expect the resignation of Kyrgyzaltyn’s two nominees to the Centerra board of directors.

In addition, Centerra expects that Kyrgyzstan would assume all responsibility for the company’s two Kyrgyz subsidiaries and the Kumtor Mine. Centerra also stated an expectation of payment in cash “equal to the net amount of the three dividends paid by Centerra in 2021 that Kyrgyzaltyn JSC did not receive as a result of the seizure of the mine and certain other financial consideration associated with the settlement of inter-company balances between Centerra and its two Kyrgyz subsidiaries.”

Finally, Centerra would expect the “full and final release of all claims” and the end of all legal proceedings “in all jurisdictions with no admissions of liability.”

Put more simply: Centerra wants to wash its hands of the Kumtor headache and walk away, with at least some compensation. Bishkek, for its part, may prefer an out-of-court settlement for fear of losing in court over its seizure of the mine.

Ahead of Centerra’s announcement, Kyrgyz President Sadyr Japarov visited the Kumtor mine and issued a statement: “At present, the parties are finalizing the discussion of an amicable agreement, including, among other things, the condition for the full transfer of the Kumtor Gold Company to the Kyrgyz Republic.”