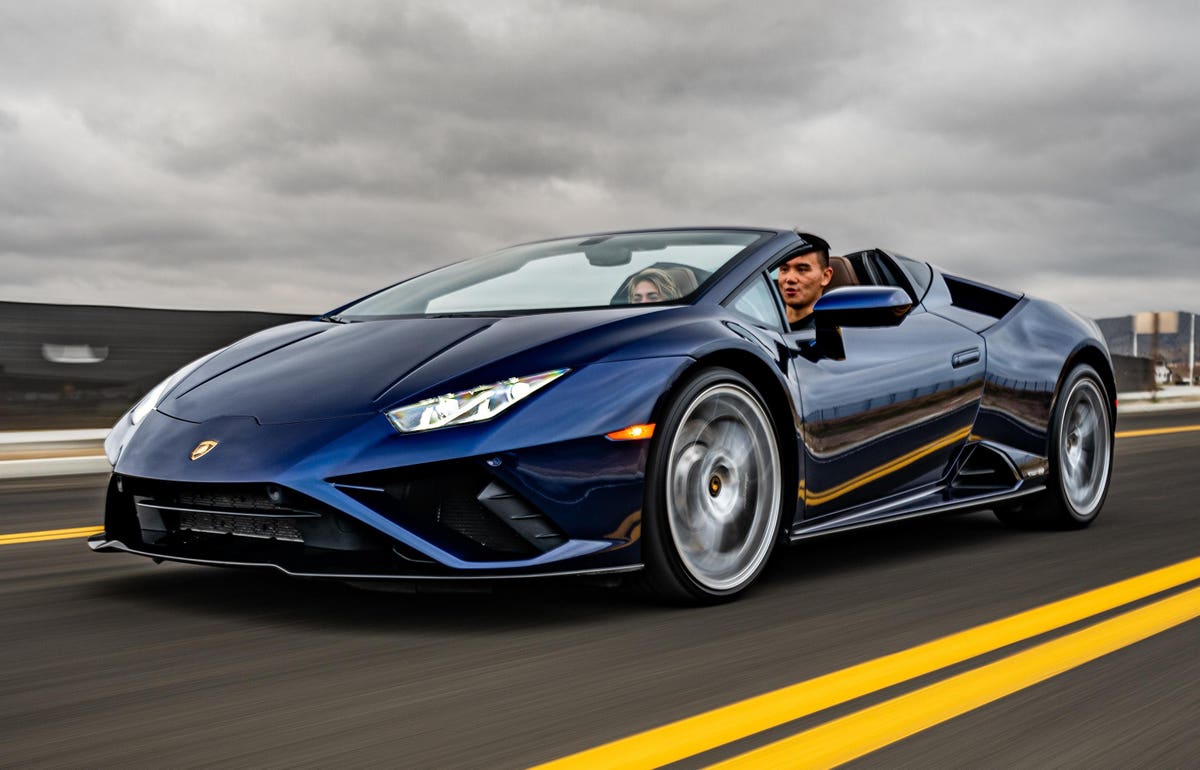 Drive an Italian supercar with that famous charging bull on the badge and you know it’s not going to be a somber experience. You figure there’s going to be plenty of visual, audible, and gravitational stimuli. But if you think you’re fully prepared for what the Lamborghini Huracan EVO RWD Spyder is going to deliver in those areas, well…you’re probably not.

I’ve driven a Lamborghini or three, and when I saw this version of the Huracan parked in my driveway I calibrated my expectations based on what I’d experienced with previous drives of the V10, mid-engine supercar and what knew of this one. But I miscalculated. See, the RWD Spyder loses some power compared to the all-wheel-drive Huracan, ringing in at “just” 610 horsepower and 413 pound-feet versus the AWD model’s 630 hp and 453 lb-ft. Lamborghini says this one is still good for a 0-60 run in 3.5 seconds and a top speed of 201 mph — hardly lackadaisical.

Add in a fabric top that drops in 17 seconds (at speeds up to 31 mph) and you can be fooled into thinking this is the “relaxed” version of the Huracan — the “cruiser” model if you will. So you relax, too, as you slide behind the wheel. Then you hit the that trademark red start button on the center console and rouse the V10, which even in “Strada” (street) mode seems anything but relaxed. The engine’s deep burble at idle had me thinking of the dragon, Smaug, from The Hobbit, after Bilbo woke it up. Even sitting on his pile of gold, emerging from a long slumber, you knew there was a lot of power about to be unleashed.

The idling Hurricane EVO RWD Spyder, with its more aggressive front and rear fascia compared to the AWD model, fits the sleeping dragon metaphor particularly well. And it doesn’t disappoint when the beast starts to move. The torque from the naturally-aspirated V10 comes on strong just off idle, and the 7-speed dual-clutch transmission shifts as quickly as you can work the paddle shifters just ahead of the steering wheel. Left in automatic mode while prowling the streets of Orange County, everything from ride quality to shift quality to exhaust note feels quite civilized. For a recently-roused dragon.

But I could tell this dragon wanted to fly. So I headed southeast toward the Cleveland National Forest in east San Diego County, and eventually found myself on a series of left- and righthand sweepers with the Lamborghini in “Sport” mode. Now the dragon was in its element, belting out one of the most aggressive factory exhaust notes I’ve ever heard, followed by the most aggressive off-throttle pops and cracks I’ve experienced in a standard exhaust system. This is not a complaint, by the way, just my clear statement to confirm the Huracan EVO RWD Spyder is not the slightest bit a relaxed or diluted version of the Huracan.

While the audible storm created by this Lamborghini would have been enough to keep me entertained, the EVO RWD Spyder’s laser-sharp steering, confidence-inspiring brakes and playful traction control settings (in Sport mode) created a full-bodied driving experience. I can state for the record I’ve driven this familiar stretch of road at least a tad quicker in other supercars, but I have never driven it with more sound, fury or emotion, or with a wider grin on my face.

Credit the Huracan’s aluminum and carbon fiber chassis, along with its double-wishbone front and rear suspensions that culminate in 20-inch Narvi rims wearing Pirelli PZero tires (the latter an option on my test car; standard wheels are 19-inch Kari rims). These components come together in harmony, giving the Huracan EVO RWD Spyder fully-sorted driving dynamics that work whether tooling along PCH or hammering through a series of S-turns. Sport mode allowed for a nearly ideal bit of “tail out” action on long sweepers before reeling things in, while Corsa mode further stiffened the active suspension to a level best saved for track days.

Like every supercar, the Huracan EVO RWD Spyder isn’t flawless. Its seat required careful adjustment to fit my 6-foot frame. And while it eventually did without issue, another inch or two of inseam and/or torso would have likely created a cramped cockpit and hunched driving position. As it was I found my sight line barely below the top of the windshield header. I’m also not a fan of Lamborghini’s touchscreen interface, as I never did figure out how to easily switch between audio, climate and phone functions.

Thankfully, these issues were easy to forgive and forget every time that V10 crackled while braking for a turn before the rear differential locked and the V10’s flat torque curve shrieked away from each apex. With a starting price of $234,000, and an as-tested price of $288,411, this “Blu Astraeus” convertible with “Nero Ade” chocolate leather was beautifully spec’d and a sight to behold, even at rest. If you’re looking to revel in top-down driving with the most emotional version of Lamborghini’s V10 model, the Huracan EVO RWD Spyder is the dragon you’ll want to fly.