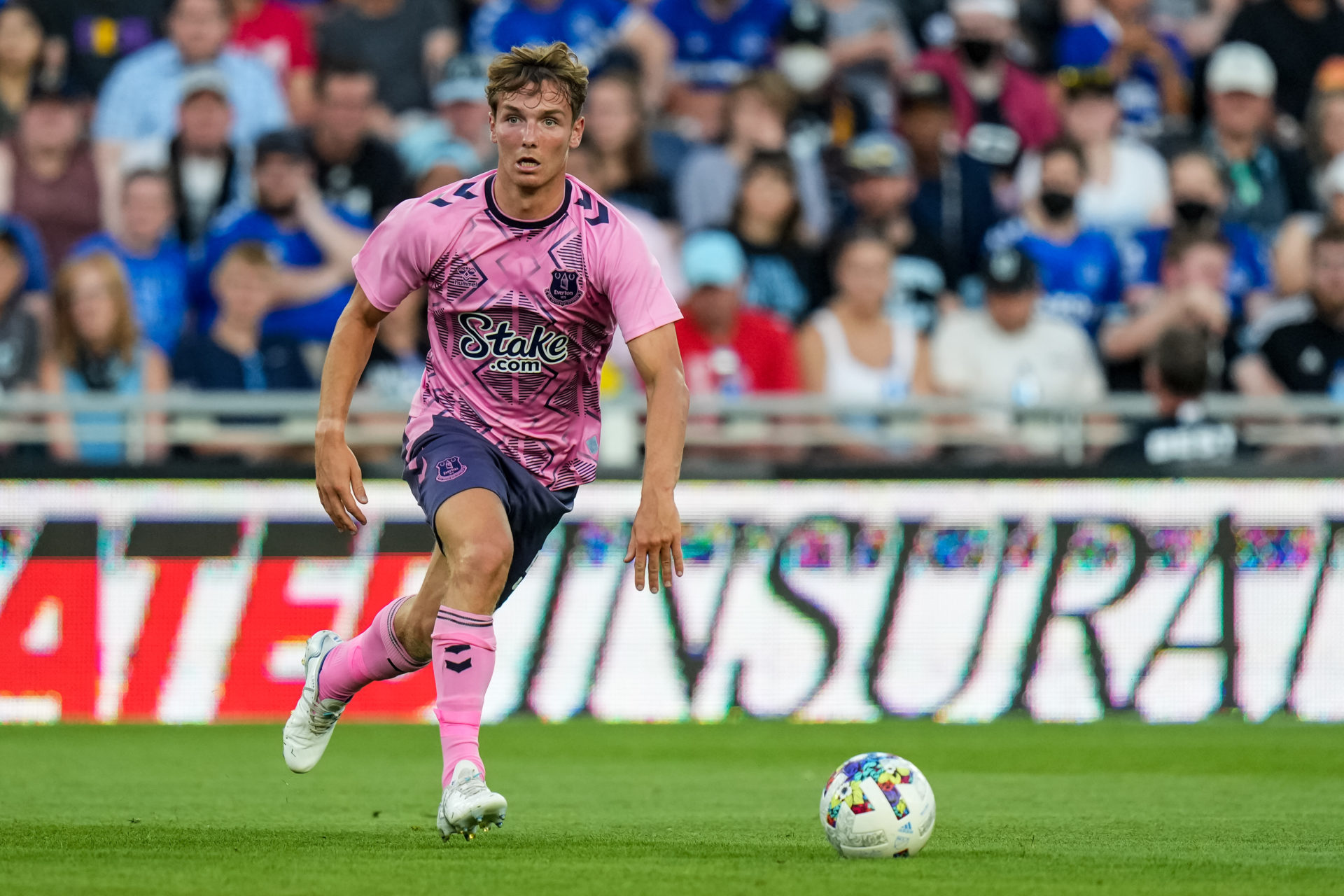 Everton have a host of players aged 21 or under who could breakthrough at Goodison Park under Frank Lampard in the new season, including Lewis Warrington and Charlie Whitaker.

Lewis Warrington headlines the list of young players set to breakthrough at Everton under head coach Frank Lampard this term. The teenager is now on the fringes of the Goodison Park first-team fold after a productive pre-season, and may soon get his competitive bow.

Lampard showed he is prepared to put his faith in rising stars whilst the Toffees fought to avoid relegation from the Premier League last term. The Blues visited Burnley in May with a starting XI boasting an average age of just 24.7 years old, their youngest XI of the season.

It was also the 21st youngest throughout the top-flight, with only Arsenal naming starting line-ups with a lower average age. Everton also ranked 28th with the XI that Rafa Benitez fielded against Chelsea in December at 25 years old for a 1-1 draw after a host of injuries.

Isaac Price was the youngest player to feature for Everton during a Premier League fixture in the 2021/22 campaign. The central midfielder made his first and only appearance of the season at 17 years old against Arsenal on the last day of the term with a 12 minute cameo.

Jarrad Branthwaite and Anthony Gordon registered the most top-flight minutes by players aged 21 or under at Everton last season. The former featured for 387 minutes through six outings, first playing at 19, while the latter played 35 games for 2,286 minutes at 20 to 21.

Warrington will hope to follow in Gordon’s footsteps and breakthrough from the academy fold to become a first-team regular player at Everton. The 19-year-old is yet to feature in a competitive senior matchday squad at Goodison, but has enjoyed a productive pre-season.

Lampard afforded Warrington a spot in the Toffees side that travelled to the USA after also awarding him a new contract in May. The central midfielder would use his chance to good effect with minutes in friendlies against Arsenal and Blackpool, after a loan spell last term.

Everton sent the Birkenhead-born prospect to Tranmere Rovers for the second half of last season. He would enjoy 17 appearances in League Two with Micky Mellon’s men, and also hit a goal plus two assists. Now, iNews report Everton will block another loan this summer.

Price will strive to now build on his Premier League debut during May and breakthrough as a first-team Everton player. He had previously appeared on the bench six times before the former Northern Ireland U17 talent enjoyed playing the final 12 minutes away to Arsenal.

Lampard also handed Price his senior Everton debut in March as an 89th-minute substitute at home to non-league Boreham Wood in the FA Cup. The stoppage-time showing marked his debut senior appearance for any club in his career, having not embarked on a loan yet.

Everton clearly believe in the 18-year-old’s potential, having taken their academy product on tour in America this summer. Price has also impressed in his pre-season appearances in the Toffees’ U21s, having shown strong creativity at set-pieces under new head coach Paul Tait.

Reece Welch to finally breakthrough after impressing Everton for years

Reece Welch will hope the 2022/23 campaign marks the season he finally breaks through as a first-team player at Everton. The 18-year-old has been impressing staff at Finch Farm for years, but has so far only enjoyed one senior appearance as an 89th-minute substitute.

Lampard afforded the centre-back his debut as the Toffees hosted Boreham Wood in the FA Cup this March. The Merseyside affair marked one of nine occasions Welch has been in a first-team matchday side. But he has spent all eight Premier League games on the bench.

Welch recorded five of his unused substitute Premier League involvements under Lampard over the final 10 games of last term. He also remained a part of Lampard’s fold during pre-season, and will hope to now get a chance to showcase his potential in competitive games.

Charlie Whitaker ready to give Frank Lampard food for thought

Charlie Whitaker is ready to give Lampard food for thought as the 18-year-old closes in on his senior Everton debut. The Toffees academy product has appeared on the bench during just one first-team fixture before. He sat on the bench at Manchester United last October.

Benitez listed Whitaker among his backups at Old Trafford after the versatile creator made an early mark at youth level. He had ended the 2020/21 Premier League 2 season with five goals and two assists in his final four outings, and started last term with three goals in six.

Whitaker would eventually end the 2021/22 PL2 season with five goals and an assist over 15 appearances. But his best strength came in the youngster’s versatility with matches on both wings, through the spine of David Unsworth’s midfield and even as a centre-forward.

Unsworth also hailed Whitaker this April for being ‘outstanding’ as a shadow striker for his junior-level squad. The former Blues youth boss admired how the Toffees product showed he can drop into the pockets of space behind a centre-forward and orchestrate the games.

Tom Cannon can fire his way into the first-team fold at Goodison Park to breakthrough as a senior Everton player this season. The 19-year-old is yet to feature in a matchday squad at first-team level so far in his fledgling career. But he has proven a strong pedigree so far.

The Republic of Ireland U20 international offered 29 goals and nine assists through his 42 appearances for Everton’s U18s. He then stepped up to what was Unsworth’s reserves in 2020/21, before making his mark last term with eight goals and an assist over 25 games.

Cannon astounded Unsworth with his attacking potential in Premier League 2 fixtures last season. There were still a few rough edges to polish in his game, but the potential is there.

“We all know about Tom’s goalscoring,” Unsworth told Everton’s club website in February. “He does the hardest thing in the game, he puts the ball in the back of the net. We just need to get the other areas of his game up to speed, and he’s done so well this year.”

In other news, Romano: Club to buy Newcastle, Everton and Tottenham target for initial £9m