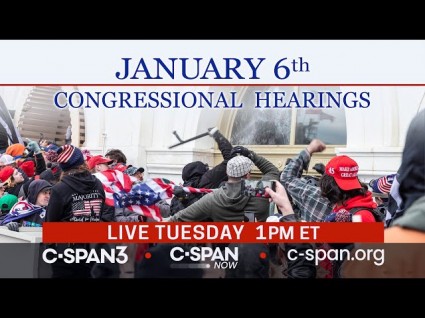 Via CNN, the focus of today’s hearing will be on Trump’s pressuring states to overturn election results:

The House select committee investigating the January 6, 2021, attack on the US Capitol turns its attention Tuesday to the campaign to pressure state-level officials to overturn the 2020 election results.

The hearing will focus in particular on then-President Donald Trump’s efforts to overturn the results in Arizona and in Georgia – where Trump infamously asked Georgia Secretary of State Brad Raffensperger to “find” the votes he needed to win.

Committee aides said the hearing will also demonstrate how Trump and his allies concocted a scheme to submit fake slates of electors.

“During this hearing, what we’ll demonstrate is that President Trump and his allies drove a pressure campaign based on lies and these lies led to threats that put state and local officials and their families at risk, these lies perpetuated the public’s belief that the election was stolen, tainted by widespread fraud. And these lies also contributed to the violence on January 6,” a select committee aide said.

“We will show that the President was warned that these actions, including false claims of election fraud, pressuring state and local officials, risked violence,” the aide added, but Trump “did it anyway.”

Committee aides said that the panel will show the role Trump’s former chief of staff Mark Meadows played in the pressure campaign led by Trump in these key states, “particularly in Georgia.” And aides shared that in addition to the live witnesses, the committee will present testimony from officials in Michigan and Pennsylvania about the Trump-led pressure campaign there.

Now that the % of Americans who feel Trump SHOULD be charged with crimes related to Jan 6th has reached 58% (including 19% of Republicans), the questions become – what will it be after tomorrow’s Schiff-led hearing? What will it after the hearing after that? How high can it go?

Coming up in next Jan 6th Hearing: Mark Meadows will be exposed. In this photo Mark is asking Trump, if Meadows should burn that National Security classified document, or will Trump be eating it for lunch.. https://t.co/tgihLitMW7 pic.twitter.com/2idaXdiY9X

The 1/6 committee “will release new information about Meadows’ appearance at a key election meeting in Georgia and text messages revealing he wanted to send autographed Make America Great Again hats to people conducting the audit.”