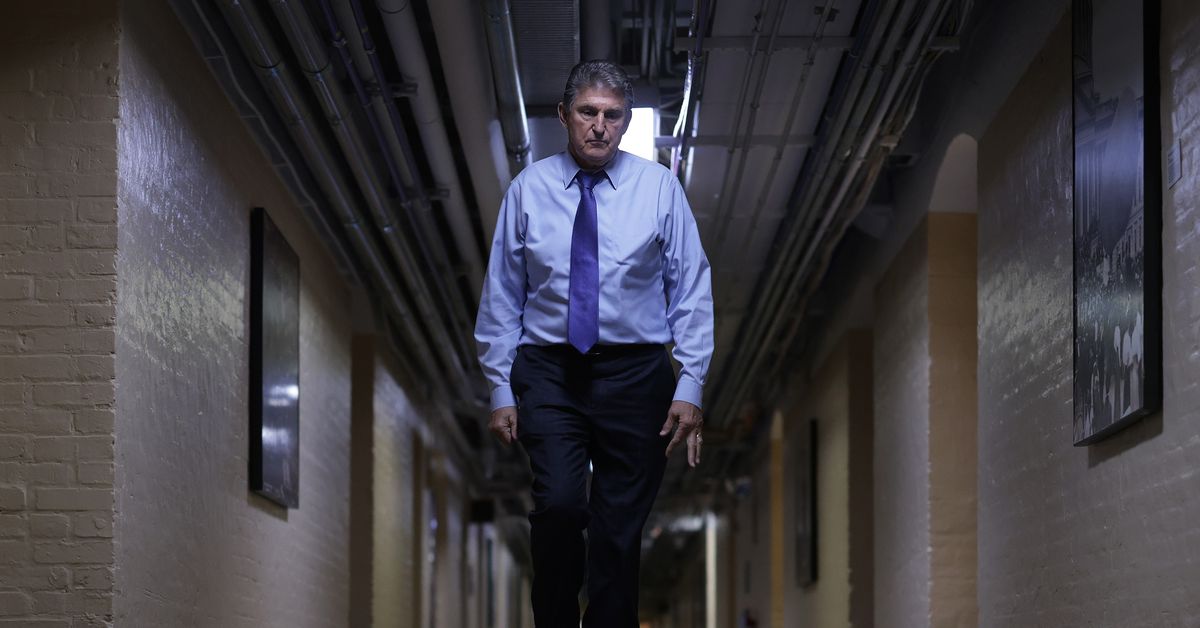 The Build Back Better Act — at least as currently written — is dead, Sen. Joe Manchin (D-WV) said Sunday in an appearance on Fox News Sunday. Whether it can be resurrected in some new form depends on Manchin.

The bill, which proposed $1.75 trillion in social and climate spending, has been on shaky ground for a while. Despite the measure being a key part of President Joe Biden’s agenda, Manchin has for months raised concerns about the bill’s scope and cost. Now, Manchin, whose vote is crucial given Democrats’ slim majority in the Senate, says he won’t support it because of concerns about the resurgent Covid-19 pandemic and rising inflation.

“I cannot vote to continue with this piece of legislation,” Manchin told Fox News Sunday host Bret Baier. “This is a no on this legislation.”

“I cannot vote to continue with this piece of legislation.” — Sen. Joe Manchin (D-WV) says President Biden’s Build Back Better plan “is a no.”

“I’ve tried everything humanly possible. I can’t get there.” pic.twitter.com/HsgXgYms3e

Manchin has repeatedly claimed that BBB spending would increase and entrench inflation, although the White House and many economists have pushed back on this. A letter from 17 Nobel Prize-winning economists in support of the bill’s policies argues that, in the long term, it will actually decrease inflation:

While we all have different views on the particulars of various economic policies, we believe that key components of this broader agenda are critical—including tax reforms that make our tax system more equitable and that enable our system to raise the additional funds required to facilitate necessary public investments and achieve our collective goals. Because this agenda invests in long-term economic capacity and will enhance the ability of more Americans to participate productively in the economy, it will ease longer-term inflationary pressures.

At a Wall Street Journal event in December, when November’s Consumer Price Index numbers showed inflation rose 6.8 percent over the past year — the fastest increase and highest rate in nearly 40 years — Manchin claimed the new data proved the economists’ arguments wrong, although they were referring to longer-term trends. “We had people at that time saying inflation would be transitory,” Manchin said. “We had 17 Nobel laureates saying it’s going to be no problem. Well, 17 Nobel laureates were wrong.”

It remains possible Manchin may support a different social spending package, though it’s not clear what that might look like.

Any one senator has the power to derail Build Back Better, because Democrats have the narrowest possible majority in Congress and hoped to pass the bill through the budget reconciliation process. That allows legislation to be passed by a simple majority in both chambers of Congress so long as its provisions are related to budgetary matters, circumventing the filibuster in the Senate.

As the most conservative member of Democrats’ slim Senate majority, Manchin has used that fact to exercise outsized influence on the bill from the start — both its costs and its contents. Largely due to Manchin’s priorities, what began as a $3.5 trillion piece of legislation dwindled to about $1.85 trillion by the time it passed the House, and was facing further cuts in the Senate.

Last week, Manchin quashed Democratic hopes that the bill might pass the Senate ahead of the chamber’s holiday break, again due to cost and scope concerns. That forced Congress to end its 2021 session early Saturday morning after a run of ambassadorial and judicial confirmations.

The White House had tried for months, and particularly over the past week, to get Manchin on board with the legislation. Congressional Democrats see Manchin’s about-face as a betrayal, given that they passed Biden’s infrastructure bill with the understanding that the White House and Senate would reciprocate and pass BBB.

“You may recall that the agreement from the beginning was that there was one package: Part of it would be the bipartisan infrastructure, but the other part would be all these things that are now in Build Back Better,” Sen. Elizabeth Warren (D-MA) said Sunday.

In a scathing statement Sunday, White House press secretary Jen Psaki said Manchin had reneged on previous promises with the White House to support the bill and continue with negotiations.

“If his comments on FOX and written statement indicate an end to that effort, they represent a sudden and inexplicable reversal in his position, and a breach of his commitments to the President and the Senator’s colleagues in the House and Senate,” Psaki wrote.

The implications of the bill’s potential demise are massive.

It contained a measure extending the expanded child tax credit Democrats passed in response to the pandemic. That credit sent monthly payments to nearly all US parents, and cut child poverty substantially in its first year of existence, but its last payment went out Wednesday, and the program will now lapse. If extended by the Build Back Better Act, it could reduce poverty by 40 percent going forward, according to the Center on Budget and Policy Priorities. Additionally, as Vox’s Rebecca Leber pointed out, the end of BBB could be the end of a once-in-a-decade chance to fight climate change.

While Manchin had previously expressed a desire to make a deal with Biden and progressive Democrats on the bill, he’s also been clear that he wants to limit any new spending. He sent a proposal to Democrats in the Senate back in July stating he wanted to keep costs for the reconciliation bill to $1.5 trillion, Politico reported at the time.

That proposal included a tax plan to help cover the cost of the bill, with any additional revenue going to paying down the deficit, one of Manchin’s persistent concerns. At the time, he also requested that the Federal Reserve begin its tapering plan to combat inflation, something it’s now committed to doing.

“My Democratic colleagues in Washington are determined to dramatically reshape our society in a way that leaves our country even more vulnerable to the threats we face,” Manchin said in his statement. “I cannot take that risk with a staggering debt of more than $29 trillion and inflation taxes that are real and harmful to every hard-working American at the gasoline pumps, grocery stores and utility bills with no end in sight.”

Sen. Bernie Sanders (I-VT) reacted to the news on CNN’s State of the Union Sunday, telling host Jake Tapper, “Well, I think he’s gonna have a lot of explaining to do to the people of West Virginia,” chiding Manchin for refusing to pass the legislation, which would also lower prescription drug costs, expand Medicaid, and provide funding for increased home health care.

“Well, I think he’s gonna have a lot of explaining to do to the people of West Virginia.” pic.twitter.com/448VFowzPC

A number of lawmakers, including Sanders and Rep. Adriano Espaillat (D-NY), said Sunday that the bill should be brought to a vote in January despite Manchin’s statement, essentially daring him to vote against a bill that’s a Democratic and presidential priority.

“If Sen. Joe Manchin wants to vote against the Build Back Better Act, he should have the opportunity to do so with a floor vote as soon as the Senate returns,” Sanders wrote in a statement Sunday, adding he found it “amusing” that Manchin would approve the National Defense Authorization Act at nearly $780 billion in military spending while eschewing the BBB’s social programs.

Many progressives in the House echoed this statement, while also sharply criticizing Manchin; Rep. Ilhan Omar (D-MN) called Manchin’s claim that he had “done all he can” to reconcile his priorities with BBB “bullshit” in a tweet on Sunday, while her colleagues in the Congressional Progressive Caucus issued a critical statement, calling Manchin’s comments a betrayal. “He routinely touts that he is a man of his word, but he can no longer say that,” the CPC wrote in the statement. “West Virginians, and the country, see clearly who he is.”

New statement from the CPC: “Senator Manchin has betrayed his commitment not only to the President and Democrats in Congress but most importantly, to the American people” pic.twitter.com/U22KamW7bb

Republicans, for their part, have praised Manchin’s decision to waylay the bill, which was universally opposed by the GOP from the start.

“President Biden’s mega-spending bill is dead and Joe Manchin put the nail in the coffin,” Nebraska Sen. Ben Sasse said in a statement. “This should be a reality check to wild-eyed progressives that they are not the mainstream: With a divided country, a 50-50 Senate, and blowout inflation, the American people don’t want to upend this country with nakedly-partisan legislation.”

While Manchin’s statement sounds quite final, and has been interpreted that way in some cases, it’s not clear whether this is actually the end for Biden’s domestic policy agenda.

As Vox’s Andrew Prokop explained on Sunday, it’s possible Manchin is “fully dug in against any form of Build Back Better.” However, his Sunday Fox News appearance could also be a negotiating tactic — a strategy Manchin has used previously to extract changes to the Democrats’ voting rights bill, the For the People Act.

In his statement Sunday, Manchin didn’t close the door to future negotiations entirely, and it’s ultimately unclear what will come next for Build Back Better.

“I will continue working with my colleagues on both sides of the aisle to address the needs of all Americans and do so in a way that does not risk our nation’s independence, security and way of life,” Manchin said.