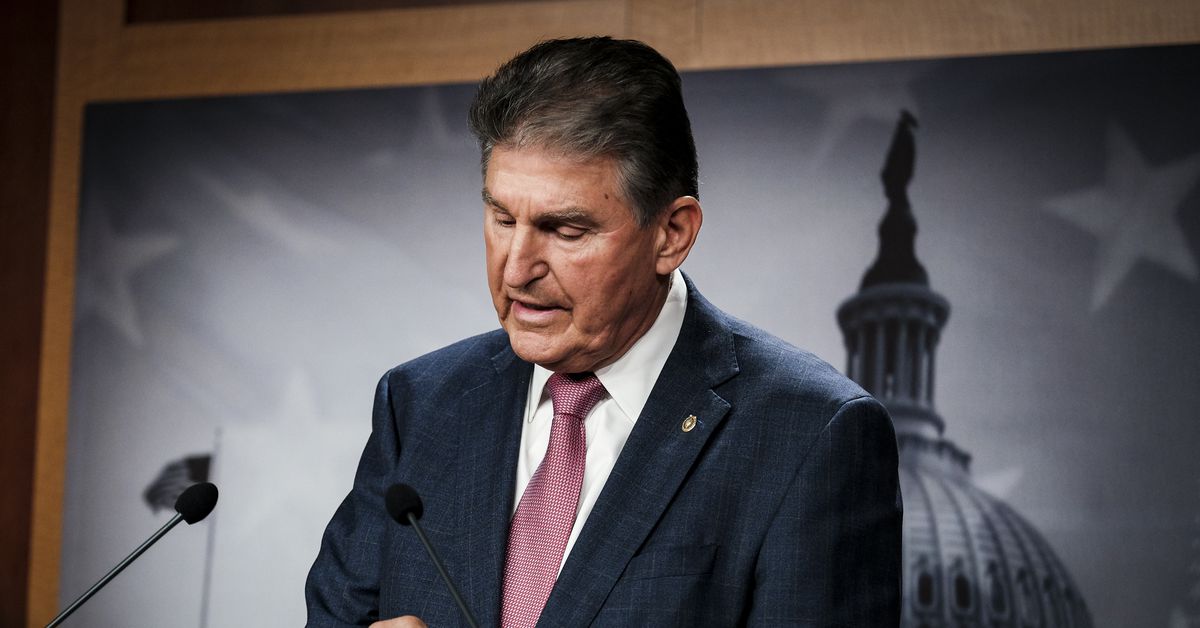 Sen. Joe Manchin (D-WV) appeared to plunge his knife in the heart of President Joe Biden’s agenda Sunday, saying in a Fox News appearance that he “cannot vote to continue with” the Build Back Better Act. “I can’t get there.” He added, “This is a no — on this legislation.”

Manchin’s statement seemed to herald the end for Democrats’ hopes that the bill can pass in anything like its current form. And White House press secretary Jen Psaki soon released a blistering statement blasting Manchin for waffling, accusing him of “a breach of his commitments to the President,” and revealing private details of Manchin’s negotiations with Biden.

So the big question hanging over the Biden presidency — and the millions of people this legislation could affect — is: is it all over? Or is a more limited deal still possible?

The Build Back Better Act, in its most recent iterations, would devote around $2 trillion over 10 years to liberal policy programs, including child care funding, pre-K expansion, the expanded child tax credit, health care programs, and clean energy measures, as well as raising taxes on corporations and the wealthy (and cutting them for wealthy people in high-tax states).

All year, Manchin has criticized these plans’ overall cost, and urged Democrats to bring the amount of the bill down to $1.75 trillion over 10 years. The White House met this demand in a creative way — they kept almost all of the new programs in the bill, but set many to expire after a few years, which made the bill’s 10-year cost look cheaper.

Since early November, Manchin has made clear he was not a fan of this approach, saying it entailed “shell games” and “budget gimmicks.” He demanded the bill do fewer things, and fully fund those things over 10 years. But Democratic leaders resisted, not wanting to upset progressives or any constituencies by cutting their favored priorities.

So, is Manchin fully dug in against any form of Build Back Better at this point? Or is he just trying to get Democrats to finally take his negotiating demands seriously — basically, holding out for a better deal?

The answer hinges on whether Manchin himself is negotiating in good faith or bad faith. If he means what he has said previously about the sort of bill he can accept, and the problem is the White House’s reluctance to budge, then a deal is possible. If he is just searching for a pretext, any pretext, to kill the bill, then there will be no happy ending for Build Back Better. It’s unclear if even Manchin himself knows which is the case. But here’s how things look under each scenario.

One reading of Manchin’s comments: the bill is toast

Most media outlets and commentators have taken Manchin’s announced opposition to the bill at face value, and there are certainly good reasons to do so.

In his interview with Fox’s Bret Baier and a subsequently released statement, Manchin cited several concerns that aren’t really the sorts of things that can be negotiated — for instance, he argued that Biden should be focusing on inflation, the omicron variant, and “geopolitical uncertainty” rather than this bill.

Manchin also signaled that he wasn’t sold on one of the key aspects of the bill — its spending on clean energy measures aimed at fighting climate change. In his statement, he said the US’s clean energy transition was already happening, and he worried that the bill would push it “at a rate that is faster than technology or the markets allow,” leading to potentially “catastrophic consequences for the American people.” (Manchin represents a coal-heavy state and he himself owns coal businesses.)

There are further discouraging signs in Sunday’s White House statement. Psaki claims that Manchin made a private commitment to the president at his home in Wilmington, Delaware, to support the “framework” for a somewhat scaled-down Build Back Better that the White House announced back in October. (Though one has to wonder about the exact language of a commitment made between two such famously imprecise speakers as Biden and Manchin, especially since Manchin started criticizing that framework just days after it was announced.)

Psaki’s statement also notes Manchin presented his own proposal just this week that “we believed” could “lead to a compromise acceptable to all.” The suggestion here is that Manchin has been negotiating in bad faith, and that he may just be looking for a pretext to kill the bill.

“Just as Senator Manchin reversed his position on Build Back Better this morning, we will continue to press him to see if he will reverse his position yet again, to honor his prior commitments and be true to his word,” Psaki wrote.

The scorching tone of the White House statement itself seems to also indicate they no longer view Manchin as a trustworthy or reliable negotiating partner. Going public with such criticism against a same-party senator whose vote you need is highly unusual, and may suggest the White House holds little hope of reviving the bill at this point.

Another reading of Manchin’s comments: a deal is still possible

Yet there’s another interpretation of Manchin’s comments, and of the past few months of Build Back Better developments, where Manchin has been the consistent one — and the problem is that Democrats haven’t been willing to make the compromises necessary to win him over.

From progressives’ perspective, they have been constantly making concessions to Manchin on Build Back Better all year: dropping their signature climate program from the bill, agreeing to drop paid leave, and significantly shrinking the bill’s overall size down from $3.5 trillion over 10 years.

But Manchin argues that, actually, they’ve changed very little. The bill remains a grab bag of practically all of Democrats’ domestic policy agenda, or at least everything that Senate rules will allow to pass through the budget reconciliation process. Democrats did drop some proposals, but the main device they used to lower the cost was to set programs to expire after just a few years (or even one year).

Manchin told Baier that, across the bill’s various versions, it was “basically the same amount of things that they were trying to accomplish.” He added, “If you’re going to do something, pick what our prized priorities are — like most people do in their families or their businesses — and you fund them for 10 years. And you make sure they deliver the services for 10 years. It’s hard to deliver service for one year or two years or five years.”

Again, Manchin has been saying this since early November, so it hardly comes as a surprise. And if Manchin really did make an offer to the White House this week, as Psaki claims, that suggests he has an idea of what he’d accept. What’s odder is that there’s been no known effort from the White House or top Democrats to revise the bill in that way, even though he was long known to be the crucial swing vote. House Speaker Nancy Pelosi briefly seemed inclined toward a bill that would do “fewer things better,” but she reversed course after House progressives disagreed, instead crafting a House bill that exemplified the “keep everything in, but set it to expire soon” approach.

So perhaps Manchin’s announcement is meant to serve as a bucket of cold water in progressives’ faces — to make them finally realize that either they go along with the major structural changes to the bill that he wants, or they get nothing.

Another relatively optimistic possibility is that Manchin is deliberately sinking the big liberal bill in a high-profile way to burnish his brand as an independent, but will eventually work on and support his own compromise bill — as he did on voting rights earlier this year. Democrats had crafted a massive bill called the “For the People Act” that passed the House, but Manchin panned the bill and announced he wouldn’t vote for it. Then, over the ensuing months, he negotiated a compromise called the “Freedom to Vote Act” that he proudly supported, though he did not actually support changing the rules to let the bill overcome a filibuster and pass.

In any case, it seems like Democrats have tried everything to get Manchin’s support —everything except actually taking Manchin’s demands seriously and scaling Build Back Better down. If they hope to salvage Biden’s agenda, that’s seemingly what must come next.