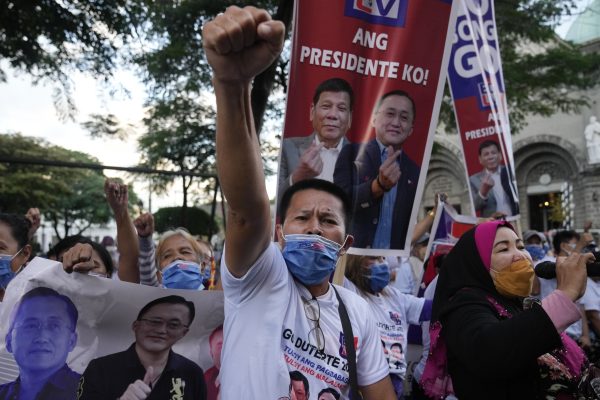 The race is on for the Philippine presidency, but has the country’s democracy entered a terminal phase?

On May 9, 2022 voters in the Philippines will head to the polls to decide on a successor to President Rodrigo Duterte. The country’s single six-year term limit for presidents means Duterte isn’t eligible for re-election, but it’s clear he has no plan to fade into political retirement just yet. Duterte himself is running for senator, while also backing his daughter’s vice presidential bid. With the list of candidates settled, the opening salvos of a potentially very nasty campaign have already been lofted.

To chart the contours of Philippine politics as the election approaches, The Diplomat spoke to Manolo Quezon III, a columnist for the Philippine Daily Inquirer and former TV host.

Now that the candidates have announced their intentions, how do you think the 2022 election will compare to the bombshell campaign of 2016? Are the forces that drove Duterte to the presidency likely to play a similar role next year?

The surprise is how the administration seemed unstoppable and unbeatable just a year ago, and now is in disarray and hard-pressed to affect the campaign that will determine who succeeds it. The reason for this is the one thing the president was considered bulletproof to: allegations of corruption. Duterte ended up politically wounded because of a Senate investigation into the purchase of PPE and face shields by the government in the wake of COVID-19.

Not only did the president, personally, take a 20-point hit in the surveys, so did his administration and even his daughter, Sara, widely discussed as a potential successor. It also turned his chief lieutenant, Christopher “Bong” Go, into damaged political goods, so much so that he dropped plans to seek the presidency and became a much-diminished candidate for vice president (he eventually reversed course yet again, filing to run as a presidential candidate at the last minute).

Every polling point drop, in turn, for the president and his people worked to the benefit of Ferdinand Marcos Jr., who once seemed headed to being shunned by the president’s allies but who now seems more and more viable as a receptacle for the fears (of post-2022 prosecution) and ambitions (to remain in power) for the president’s coalition. Former President (and past Speaker of the House) Gloria Macapagal-Arroyo tried to broker a coalition-saving formula with Sara for president and Marcos being bumped down to vice president, but Marcos didn’t blink, and in holding firm, made Sara settle for the vice presidential slot. But this leaves Go out in the cold.

President Duterte made Go run for president, and has embarked on a demolition job, insinuating Marcos is a drug addict. Duterte is also widely understood to be engineering the attempt to officially disqualify Marcos’ candidacy on the basis of his being convicted of tax fraud. COVID-19 also raises the possibility, depending on how the pandemic is doing, to depress voter turnout, injecting an unpredictable element into the campaign.