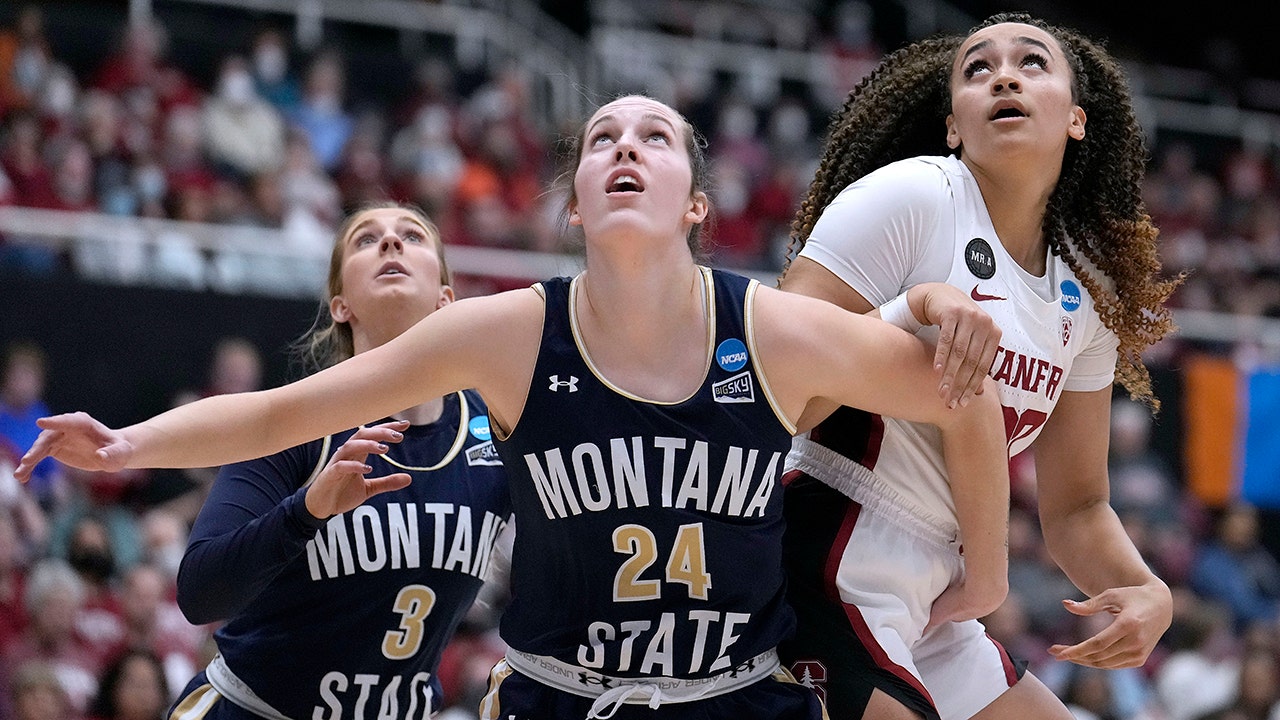 Stanford’s freshmen have been joining everybody else in begging Francesca Belibi to dunk all season, insisting they came to school here just to see her do it.

Belibi obliged at last on the big March Madness stage, blocking a shot at the 3-point line then driving the length of the floor to slam the ball home with one hand for her third career dunk. The play thrilled her teammates and the awestruck home crowd in the second quarter of top-seeded Stanford’s 78-37 win against 16th-seeded Montana State on Friday night in the first round of the NCAA Tournament.

“It’s really funny because I dunk all the time and when I look back at pictures everyone is still just as excited as if it’s their first time seeing it,” Belibi said. “So it’s really cool to see that on their faces. They’ve been getting on me all year about not dunking so far. The freshmen have been like, ‘We came here for this so where is it?’ So it was really cool to get it and make it happen and just get engulfed. I felt really loved.”

Belibi’s dunk was the first by a woman in the NCAA Tournament since Brittney Griner did it in 2013 and just the third overall along with Candace Parker’s feat in 2006. A 6-foot-1 junior who routinely dunks in warmups and practice, Belibi had a pair of slams last season — on Dec. 13, 2020, at rival California in Berkeley and a week later at UCLA.

This stage is a little different and far bigger, with the Cardinal back on their familiar home floor in the tournament’s early rounds for the first time in three years. Belibi’s teammates went crazy and the delighted fans gave her a roaring standing ovation during a timeout shortly afterward. She finished with 12 points, 13 rebounds and two blocks in 14 minutes.

“Super proud of Fran, I know we were super hyped for her,” Hull said.

Hall of Fame coach Tara VanDerveer had one concern afterward: Belibi didn’t get back fast enough and her defensive assignment scored a layup.

“I’m really happy for her and the team was crazy in the locker room for her,” VanDerveer said. “… I’m glad Fran provided a spark for us.”

In similar fashion — just without the above-the-rim theatrics — Cameron Brink began the game with two blocked shots that led to her own layups on the other end, and the sophomore star finished with 11 points, 11 rebounds and four blocks.

Stanford began a daunting title defense by winning its 21st consecutive game; its last defeat was 65-61 to No. 1 South Carolina on Dec. 21. The Cardinal (29-3) will play Sunday against No. 8 seed Kansas (21-9), a 77-58 winner against ninth-seeded Georgia Tech in Friday’s first game.

Brink had five points, three blocks and five rebounds before the Bobcats (22-13) even got on the board with their first points early in the second quarter as Stanford went on to its third-largest tournament victory margin in program history.

Lexie Hull had 13 points and five assists and Hannah Jump scored 15 for a balanced Cardinal team that went 16-0 through the Pac-12 regular season and won the conference tournament.

Taylor Janssen scored 12 for the Big Sky Conference Tournament champions, who came into the game averaging 70 points per game but faced a Stanford squad that hasn’t allowed any opponent to score more than 77 since the end of the 2019-20 season.

“That was a first,” Janssen said of Belibi’s highlight-reel move. “I’ve never been a game where someone dunked, that was really cool.”

Montana State missed its initial 21 shots spanning the first two quarters and trailed 23-0 before Janssen’s layup at the 9:15 mark of the second.

The scoreless first quarter by Stanford’s defense is the first in the Cardinal’s storied history for any period and just the second ever in the NCAA Tournament.

South Carolina did it against Texas in the 2021 tournament.

“I think in the middle of the quarter not necessarily something, ‘Oh, we can do this this quarter’ but taking every possession seriously,” Hull said of the defensive focus.

Montana State: The Bobcats, playing in their third ever NCAA Tournament, missed their first 12 3-point tries and went 4 for 24 from deep overall. … Montana State 17th-year coach Tricia Binford notched her 15th straight winning season. She called it a great week for her team “getting better.”

Stanford: Lacie Hull had four of Stanford’s 16 steals. … The Cardinal held a 56-33 rebounding advantage. … Stanford scored seven points off Montana State’s five first-quarter turnovers and forced 17 in all while committing 16. … The Cardinal improved to 15-1 at home this season.