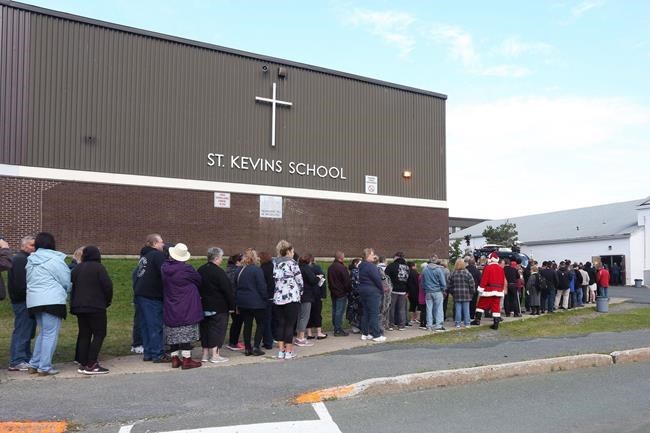 ST. JOHN’S, N.L. — The Catholic church is asking a Newfoundland and Labrador court to decide if millions of dollars raised through a local parish’s fundraiser could be used to pay survivors of physical and sexual abuse at a former orphanage in St.

ST. JOHN’S, N.L. — The Catholic church is asking a Newfoundland and Labrador court to decide if millions of dollars raised through a local parish’s fundraiser could be used to pay survivors of physical and sexual abuse at a former orphanage in St. John’s.

The cash at stake — more than $5.7 million — was raised through a Chase the Ace lottery that saw tens of thousands of people regularly flood into the Goulds neighbourhood of St. John’s during the summer of 2017 for a chance at the jackpot.

The game was launched by the small parish of St. Kevin’s in hopes of raising enough money to fix the church’s front steps, said Kyle Rees, the parish’s lawyer. They never imagined they’d raise millions, attract national attention and then wind up embroiled in what Rees says is one of the most unusual cases he’s ever worked on.

“To our knowledge, this is a unique case in this country,” Rees said in an interview. The situation, he said, has resulted in some “strange legal questions having to be asked.”

Last January, a Supreme Court of Canada ruling left the Roman Catholic Episcopal Corporation of St. John’s liable for physical and sexual abuse committed at the Mount Cashel orphanage in St. John’s during the 1940s and ’50s.

The four lead plaintiffs have filed for a payout of nearly $2.4 million, and court documents show the church anticipates at least 100 more victims to come forward with claims totalling more than $50 million. The expectation is laid out in an affidavit filed to the court on Jan. 11.

The archdiocese, which oversees 34 parishes in the St. John’s region, is now trying to figure out how it will pay those claims. It filed for creditor protection on Dec. 21, 2021, asking for time to come up with a plan. A trustee report submitted to the provincial Supreme Court that same day shows the church is looking at selling off a swath of its properties, including 19 churches in St. John’s.

Among them is the Basilica of St. John the Baptist, one of the most recognizable buildings in the provincial capital. Built in the 1840s, the grey stone spires of the ornate cathedral loom over one of the best views of the St. John’s harbour and the ocean beyond.

The trustee report says before the archdiocese can formalize its plan, it needs a court ruling on whether it has any ownership over the Chase the Ace funds, and thus whether the money can be used to pay its creditors or as part of a corporate restructuring.

“The trustee is presently of the view that the (funds) are an asset of the corporation and as such, are available for division amongst the creditors,” the report says.

“It would seem wrong, I think, to anybody who bought a ticket for that Chase the Ace to support St. Kevin’s if the Catholic Church was using that money to restructure itself so they didn’t have to sell the basilica,” Rees said. “It’s not acceptable to the people on the St. Kevin’s finance committee, it’s not acceptable to the community of the Goulds.”

Archbishop Peter Hundt declined a request for an interview, and lawyers for the Roman Catholic Episcopal Corporation of St. John’s did not respond to emails or phone calls.

An independent arbitrator ruled on the issue last November and found the money belongs to St. Kevin’s, thanks to the woman who filled out the application to hold the lottery in the first place.

Former provincial Supreme Court Justice David Orsborn’s non-binding decision is included in the Jan. 11 affidavit. He says that by his reading of the laws, the money must be used for the purpose set out on the original lottery application submitted by parish secretary Patsy Hynes: upkeep of the parish and its cemetery, as well as maintaining its food bank.

If Hynes had left that field blank in the application, the funds would go to the archdiocese, Rees said. Because she was specific, Rees said St. Kevin’s officials risk breaking the law if they hand over the money.

The Roman Catholic Episcopal Corporation of St. John’s is asking the Supreme Court to give a binding decision on the matter as part of the ongoing bankruptcy proceedings, and Rees said it’s scheduled to be considered on Feb. 28.

“This is a completely novel legal issue,” Rees said. “It requires consideration of a very narrow legal issue that no one has really had to consider before.”

This report by The Canadian Press was first published Jan. 29, 2022.