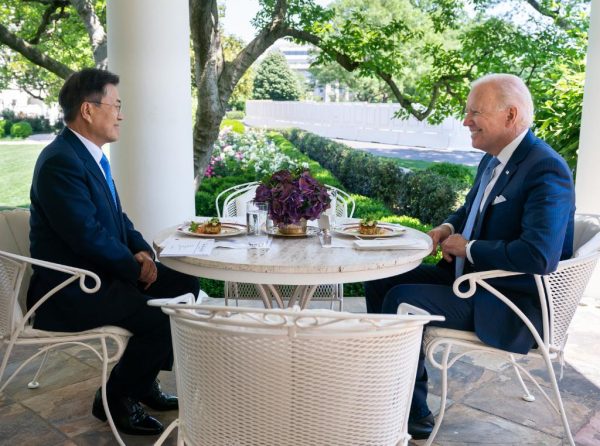 South Korean President Moon Jae-in has only six months left to reactivate his peace process and bring the North Korean leader Kim Jong Un back to the negotiating table. In May 2021, the term-limited Moon will leave office. While the South Korean president is feeling a sense of urgency, however, other countries involved have little interest in pushing forward Moon’s peace process at the moment.

U.S. President Joe Biden said on November 19 that his administration is “considering” a diplomatic boycott of the Beijing Winter Olympics, due to concerns over China’s human rights violations.

Moon had been eyeing the Beijing Winter Olympics as the potential impetus for a breakthrough on restoring dialogue with North Korea. However, with Washington publicly expressing the possibility of a diplomatic boycott of the Olympics next year, Seoul’s hands are tied. It looks likely that Moon’s peace process will fall victim to rising China-U.S. tensions.

Biden held a virtual meeting with Chinese leader Xi Jinping on November 16 to discuss the regional issues and ease tensions between the two countries. However, the meeting could not narrow the two leaders’ different views on major points of friction – especially human rights in Xinjiang and Taiwan – and the leaders did not bring up new measures on North Korea during the meeting.

Additionally, as the South Korean presidential race has kicked off, other countries see no rush in dealing with the North Korea issue. The candidates of the ruling Democratic Party and conservative People Power Party have introduced different overtures on major foreign policy issues, including North Korea and Japan. Depending on the result of the presidential election in March, there could be a major shift in Seoul’s approach, and it seems the U.S. and China are content to wait to see what happens.

Kim has continued to beef up his nuclear and missile capabilities. North Korea has not tested any nuclear weapons since 2017, keeping with Kim’s self-imposed moratorium, but in January at the Eighth Party Congress Kim declared that he will build a stronger military capability with more advanced weapons of smaller size.

Experts say Beijing’s role is crucial more than ever to tackle the North Korea issue, given Kim’s reluctance to even engage in talks. But China’s deteriorating relationship with the United States has caused Beijing to stand in the middle of the U.S. and North Korea’s hardball game. China has taken up the role of a bystander, not a player, on the issue.

Washington has urged Beijing to do more on the North Korea issue, as it is the largest trading partner and biggest ally of North Korea. But while Beijing has been delivering rhetorical support for Seoul’s efforts to promote peace and prosperity on the Korean Peninsula, China has not shown a sincere willingness to fully play its role. As both Biden and Xi have more important regional issues to handle now, North Korea’s growing missile programs are unlikely to be a top priority of the two countries’ foreign policy for a while.

“The United States would not feel the necessity to actively cooperate with North Korea if Pyongyang just keeps testing short-range missiles and produces nuclear weapons silently,” Cheong Seong-chang, a senior fellow at the Sejong Institute think tank in South Korea, told The Diplomat. Cheong added that a strong will from Biden to sit down with Kim to make productive results in nuclear talks and a peace treaty would be necessary to bring Kim back to the negotiating table.

South Korea’s foreign affairs officials have been actively consulting with their U.S. and Japanese counterparts on a formal declaration of the end of the Korean War since Moon proposed the initiative in September. It is his final attempt to gain momentum to make the related countries – especially China and the U.S. – focus more on the North Korea issue.

The United States and South Korea have shown different stances on the timing and sequence of such a declaration, however, and with his term rapidly drawing to an end, Moon’s leverage as a mediator and negotiator is minimal.