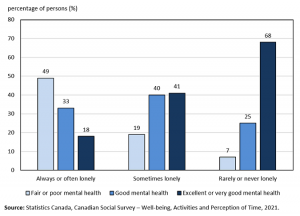 One in 10 Canadians aged 15 and older said they always or often felt lonely when asked in the Canadian Social Survey between August and September.

The survey by Statistics Canada found women, younger people and those who are not in a couple expressed higher degrees of loneliness.

Close to half of Canadians who are lonely reported fair or poor mental health.

The survey stated that given the context of the global pandemic, it’s a priority to understand loneliness and its impacts on quality of life.

Founder of Hard Feelings Mental Health, Kate Scowen, tells CityNews there was a mental health crisis in the country before the pandemic. The lack of access to supports is why she found the social enterprise.

Hard Feelings is a Toronto-based non-profit that aims to support mental health counsellors who provide low-cost services to clients.

Scowen says the pandemic is a possible indicator of why younger people and women are feeling more lonely.

“For adolescents and young adults, it’s a very social time in your life where you’re forming your identity and your place in the world, and not having your social groups to develop that with can be complicated and create loneliness,” she says.

The survey found younger women appeared to be particularly afflicted by loneliness. Nearly twice the number of women aged 15 to 24 reported consistently or often being lonely compared with women in the next decade of life.

“Online dating has been really challenging for folks. Female clients were really struggling with being ‘ghosted’ in online dating and the impact that has on self-esteem and sense of self. I think those experiences are highlighted during the pandemic.”

Nearly one-quarter of people who lived alone reported they always or often felt lonely – more than double the proportion of those living with others in their household – a statistic StatCan found not surprising.

Those who said they always or often feel lonely were three times higher among those who were not married or in a common-law relationship, compared with those who were married or living common-law, a disparity that continued when examined among men and women separately.

Of those in a marriage or common-law relationship, more women than men reported always — or often feeling lonely.

Loneliness is included as an indicator in the recently established National Quality of Life Framework, which will identify future policy priorities at the federal level.

Scowen says although there is some mental health coverage through the province’s health insurance plan, more needs to be done to make mental health services accessible.

“Right now, the only OHIP-covered mental health services are through a psychiatrist covered as a medical doctor,” she says.

“To extend that coverage to social workers, psychotherapists, psychologists to enable more access for folks I think would be really important, and a change people have been calling for, for quite a while.”

The survey found the prevalence of loneliness among the country’s largest groups designated as visible minorities was in line with the overall population.

For example, 13 per cent of South Asians and 11 per cent of Black people reported always or often feeling lonely. These results were not statistically different from the overall estimate of 13 per cent of Canadians experiencing high levels of loneliness.

Scowen says there is systemic racism and homophobia some people face when trying to access health support, such as assumptions and stereotypes, which lead to barriers to getting help.

“That’s a really big piece of it – being trauma-informed in your work and understanding the trauma of racism, the trauma of homophobia,” she says.

“Organizations, especially in a city like Toronto, are working hard to do better, but we got a long way to go.”

The survey did not provide further detailed demographic data on BIPOC folk or the LGBTQ+ community.

Scowen believes loneliness will continue and points to the United Kingdom, where the British government introduced a Minister of Loneliness.

“It’s a real struggle to move through life not feeling deeply connected to anybody else. As humans, we desire that kind of connection.”