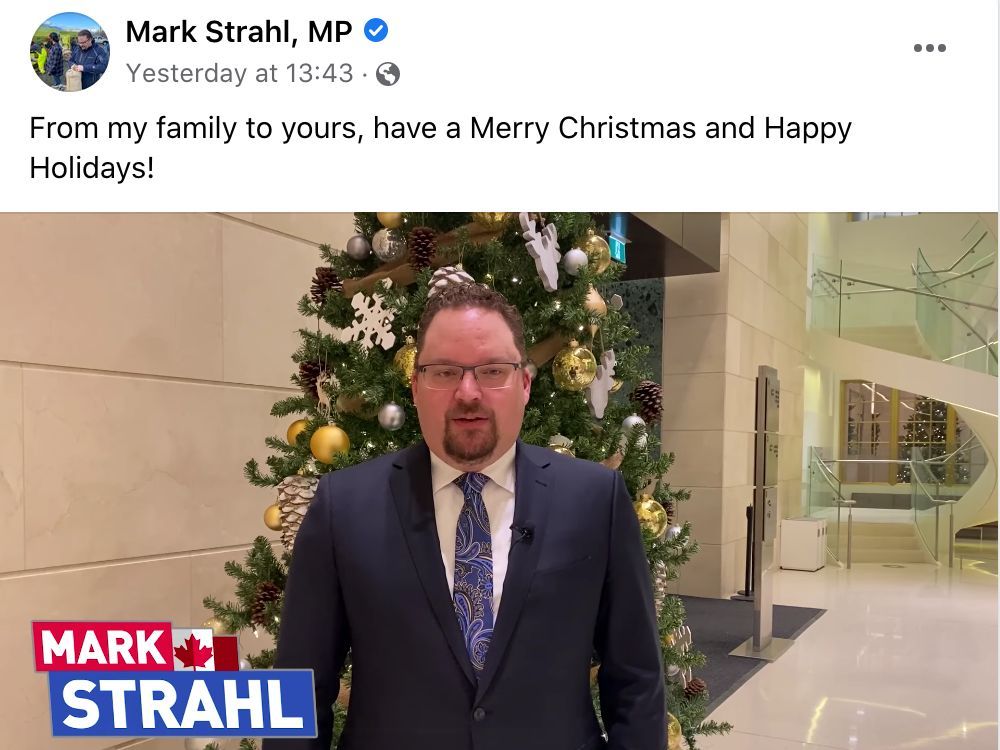 “This was a complete shock. I’ve had Facebook ads rejected before because there was too much text on a graphic and other such technicalities, but I’ve never had any of my online ads rejected for their content,” he said in an email to the National Post.

“The only explanation we received for the decision to ban our ad came from an email which stated: “Your ad was rejected because it doesn’t comply with our advertising policies,” he said

“The experience provides a glaring example of the type of online censorship and overreach by tech giant companies who control so much of the online space that I am concerned about,” he continued.

“What message was Facebook trying to prevent me from sharing? How could something as innocuous as a Christmas greeting trigger a discrimination warning? If they are cancelling Christmas, what other perfectly legitimate subjects and commentary have they declared to be ‘discriminatory’ and banned from their platforms?”

How could something as innocuous as a Christmas greeting trigger a discrimination warning?

Strahl successfully appealed the post’s removal and it was reinstated by Facebook.

“We must be vigilant to ensure that we always stand up for free speech and fight back against any attempts by these companies, or our governments, to stifle it,” his email said.

Strahl took to Twitter to express his frustration with the rejection from Facebook, repeating the messaging that was deleted.

“So, once again, Merry Christmas and Happy Holidays from my family to yours. Ignore the Scrooges and Grinches who, incredibly, would try to shut you down for saying so.”

Facebook attributed the deletion of the video post to a glitch in its algorithm, and said the ad was “correctly reinstated” following Strahl’s appeal.

“Sometimes our automated review systems get things wrong, which is why advertisers can appeal and request a review of the decision,” a spokesperson said in an emailed response to National Post. More on Facebook’s ad review process can be found here.

While Facebook has previously attributed such glitches to mistakes in the algorithm, holiday greetings have been a point of contention before.

Take Starbucks’ “war on Christmas” debacle over the last decade.

In 2015, conservative Christian evangelist Joshua Feuerstein infamously feuded with the coffeehouse for removing any reference to Christmas, saying “Starbucks has caved to political correctness” after it had reverted its seasonal winter design to a plain red cup. In a now removed video that had amassed more than 14 million views, Feuerstein incorrectly claimed that “Starbucks isn’t allowed to say Merry Christmas to their customers.”