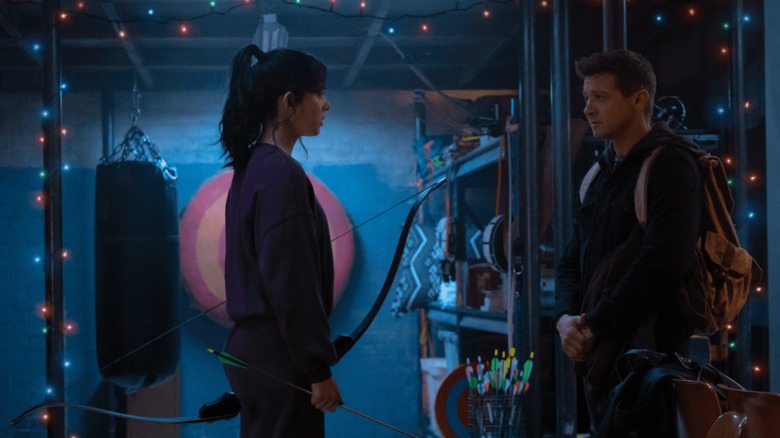 Lady Gaga’s latest film and a documentary about a beloved rapper enter the MUST-WATCH Top 10 this week! But could either of them hold the top spot, or will it go to one of the greatest rock bands of all time? You’ll have to keep reading to find out!

First, a return to the Marvel Cinematic Universe!

Hawkeye is the latest show from Marvel, and it’s about the Avenger nobody thinks about that much. Hawkeye (played by Jeremy Renner of the Hurt Locker and Arrival) has retired, and he’s come to New York with his family to celebrate Christmas. But his days as Ronin during the time between Avengers: Infinity War and Avengers: Endgame have left him with many enemies. And with a young new archer called Kate Bishop (played by Hailee Steinfeld of True Grit and Bumblebee) assuming the Ronin identity, the original Hawkeye finds himself called back into action to save her.

You can watch the first two episodes on Disney+ now, with additional episodes coming out weekly!

Next up, the second film from Ridley Scott (of Gladiator, Alien, and the Last Duel) this year!

House of Gucci isn’t just Scott’s second film this year, it’s also the second film he did this year starring Adam Driver (from Annette and Marriage Story). This film details the assassination of Driver’s Maurizio Gucci, orchestrated by his wife Patrizia (played by Lady Gaga of A Star is Born). This film shows the two constantly dressed to the 9s, as are the other actors including Jeremy Irons (from Dead Ringers and Justice League), Jared Leto (from Suicide Squad and Blade Runner 2049), and Al Pacino (from the Irishman and the Godfather). It’s set to be one of the biggest films of awards season, so you definitely don’t want to miss this one!

You can watch this in cinemas now!

Now let’s take a look at another movie featuring a famous musician!

DMX: Don’t Try to Understand is a documentary about a very specific time in the life of acclaimed rapper and actor DMX. After spending a year in jail for tax evasion, he’s released in early 2019. His tour was delayed by a year, but now he’s out on the road ready to entertain and inform the masses. The documentary covers the next year of his life, from travelling across the land, to heading back to his hometown of Yonkers. Where the documentary cuts the deepest though is with his interaction with his family. It’s going to be a painful watch for any of his fans, as he died fairly recently. But nonetheless, the Ruff Ryder rolls.

You can watch this documentary now on Crave.

How To with John Wilson (Season 2)

Next up, one of the best documentary shows on television right now!

How To with John Wilson is a rather unique show about how to do things. It’s created by John Wilson, and produced in part by Canadian comedian Nathan Fielder (the creator and star of Nathan For You). In every episode, Wilson teaches the viewer about how to do something. The show is made up of years worth of footage he got from shooting his everyday life. From watching people play on scaffolding, to saying hello to his landlord, and catching famous people getting confused on the subway, Wilson has seen it all in the endless streets of New York City. It’s a documentary show with a heart about what it’s like to live in these crazy modern times, and your life will be much better with this show in it. You might even learn a handy tip or two!

You can catch this weekly on Crave!

The Beatles: Get Back

Last but not least is something for all the dads out there!

The Beatles: Get Back is one of the most unique docu-series ever made about the Fab Four. It covers a pivotal moment in their career, the recording of one of their last albums and preparation for their famous rooftop concert (which turned out to be their last). With growing tensions between Paul McCartney and John Lennon, as well as George Harrison’s temporary departure from the band, it shows the Beatles at their most heated moments. It also shows Ringo with an excellent mustache. The footage was shot by documentary filmmaker Michael Lindsay-Hogg (who famously made the Beatles’ film Let It Be), but left on the cutting room floor. Peter Jackson (the filmmaker behind the Lord of the Rings trilogy and They Shall Not Grow Old) assembled the rest of the footage, and compiled it into a nearly 8 hour documentary.

You can watch all episodes on Disney+ now!