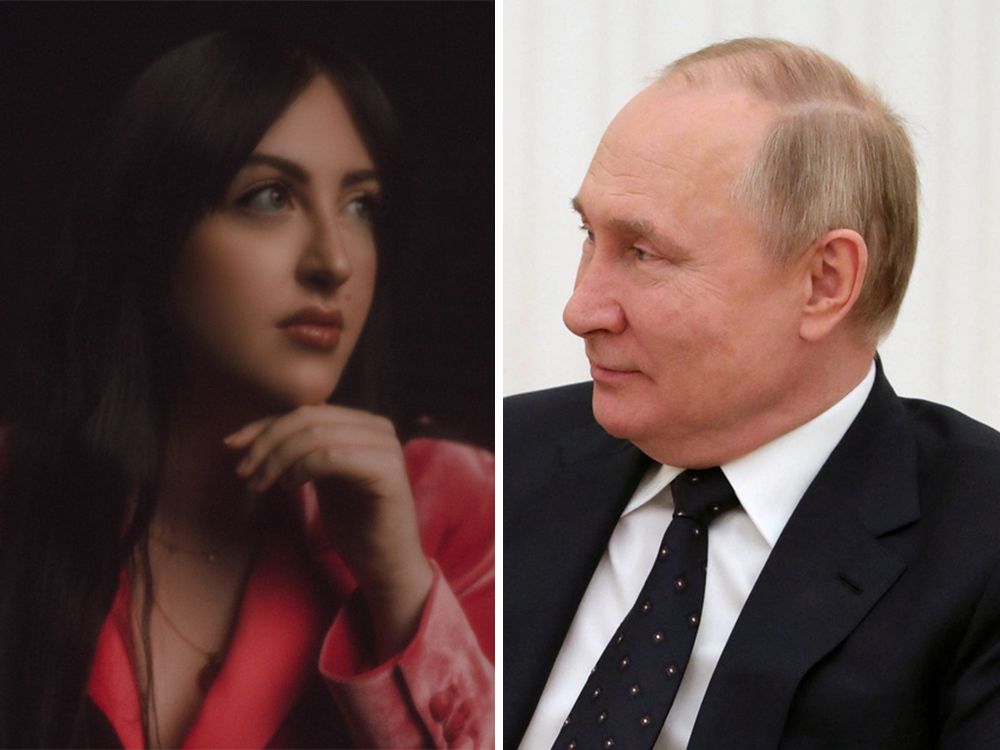 Maya Asha McDonald is a naturally curious person, she says, and accepted the invitation readily.

It was certainly a unique opportunity. An acquaintance in London had asked her to join him at a black-tie dinner in Moscow — with Vladimir Putin.

What the art historian from Gimli, Man., didn’t realize is that at just 22 she would be one of the stars in a strange “show and tell” for the Russian president, an unnerving experience that now makes her more fearful than ever for Ukraine’s cultural heritage.

As the dinner plates were cleared away at the “palatial” mansion of an oligarch who was recently sanctioned by Western countries, she was summoned to sit next to Putin and discuss her specialty, byzantine religious art.

The Canadian was taken aback by his knowledge of the rarefied topic and by his chauvinistic, competitive attitude generally toward Russia’s artistic tradition.

The hairs on the back of my head stood up

“It was so possessive the way he talked about it, it really felt unhealthy,” she said. “That word ‘greatness’ came up multiple times. It felt very propaganda-y … The hairs on the back of my head stood up.”

McDonald is convinced the Kremlin is already looting Ukraine of art treasures tied to the Russian heritage Putin extolled that night. And she believes his forces aim to simply destroy more uniquely Ukrainian works, part of a bid to erase his neighbours’ identity overall. As evidence, she cites the mass removal of artifacts from Crimea after Moscow “annexed” it in 2014, and the recent destruction of a gallery devoted to a renowned Ukrainian folk artist.

The fate of the art aside, she was also struck by a man who seemed to enjoy intimidating his guests and was blatantly sexist, staring at her chest and having her sit in a position that let him gawk at her legs.

“He looked me up and down in a way that was overt and slow and the whole table kind of chuckled,” McDonald recalls. “His eyes would go down to my neckline as I was talking and then go up. It was very clear he was doing this; it was not subtle.”

Art historians like McDonald are the first to note that the greatest tragedy of this war, like any other, is the immense human suffering. In Ukraine’s case that includes a death toll among civilians in the thousands, the pitiless siege of cities like Mariupol and the exodus of more than three million refugees.

But she’s not alone in also fearing for Ukraine’s rich trove of art and architecture as Russian troops increasingly bombard cities with artillery, missiles and aerial bombing.

Konstantin Akinsha, a Hungarian-based art historian of Ukrainian descent, is documenting the destruction that has already taken place in a blog he started earlier this month. His posts describe museums ransacked, art collections immolated, historic pieces of architecture wrecked.

While Russia may try to take works out of the region if it manages to successfully occupy Ukrainian towns and cities, he believes the chief threat now is damage and opportunistic theft by invading soldiers. And ironically, much of the imperilled art is Russian.

“I’m very scared,” said Akinsha, co-author of the book Beautiful Loot: The Soviet Plunder of Europe’s Art Treasure. “If they storm Kyiv or storm Odessa, it will be full culturalcide and a crime I cannot find comparisons for.”

“I just want to pray that some of this cultural property will survive. But we already have losses, and we will have more losses.”

McDonald, now 25, is a poised and articulate expert herself who earned a Master’s degree from Britain’s respected Courtauld Centre. Her focus was Christian and Islamic byzantine art, a specialization so esoteric the school only offers it every few years when a particular professor feels like teaching it.

She works as a freelance writer on art and a part-time consultant to private art collectors in the U.K. It’s a world populated by more than a few Russians, McDonald says, including the unofficial Kremlin representative who asked her to the dinner.

“It was a very last-minute invite to go to Moscow for the weekend … I jumped on a plane and I didn’t really think about it.”

If McDonald treated the trip as a bit of a lark, her hosts took it more seriously. The joint citizen had to submit both her Canadian and British passports for security vetting ahead of time. As she and her companion arrived at the oligarch’s private home, metal detectors swept under the vehicle. Guests were electronically frisked, too, and asked to relinquish their cell phones.

Inside the house, they were greeted by a wedding-style receiving line with senior Russian officials whom McDonald didn’t recognize, and Putin himself.

He seemed amused by the Canadian’s apparent nervousness, but surprised her by suggesting she visit Moscow’s Cathedral of the Annunciation and see relatively little-known icons there painted by byzantine artist Theophanes the Greek.

About 20 to 30 people attended the dinner, the main guests being Russian oligarchs, other business people and diplomats. Many had brought what McDonald calls their cultural guests — people meant to “add value” to what seemed like a modern version of the Czars holding court. She says she was by far the youngest present.

When the group finished dinner — “horrible food but very Russian” — a chair was cleared across the long mahogany table from Putin and one by one the special guests were ushered to the seat for a talk with the president. As they spoke, the rest of the gathering fell silent.

Translating was a stern-faced woman whom McDonald quips was “everything I imagine a Russian assassin would look like.” The interpreter told her Putin wanted to know McDonald’s views on his nation’s rich cultural history.

He interrupted and became noticeably excited when she suggested that St. Petersburg’s Hermitage was a rival to the Louvre among the world’s great art museums. Putin spoke at length, says McDonald, about the greatness of his country’s cultural legacy and at least twice used the pronoun “my” in describing the Hermitage’s collection – as if it was his and not the Russian people’s.

“I’ve never heard a politician really speak that way about a museum.”

The president became annoyed when she admitted she had not visited the new Fabergé Museum in St. Petersburg, home to Fabergé eggs that once belonged to the Romanov royal family and had been purchased abroad by Russian oligarchs in recent years.

But at the end of their conversation, the translator related that Putin thought she’d done well and was surprised that someone from Canada knew so much. That was a compliment, her companion insisted later, as Putin generally considered North Americans to be uncultured.

Then, with a glance from the president, the large man behind McDonald tapped her arm. It was time to relinquish the hot seat.

Akinsha said there’s a trend among Russia’s elite today to promote the country’s culture as a way of fetishizing the state and its leader, though he said Putin himself is an “uneducated idiot” with superficial knowledge of the nation’s history.

And McDonald believes they’ll take from Ukraine what they can to augment it. She points to reports by Ukrainian authorities that as many as a million artifacts were removed from Crimea after the Russian annexation. She suspects Moscow’s troops have already plundered museums in territory they’ve occupied in Eastern Ukraine in the last three weeks. But she said Canada and its allies could help other Ukrainian communities by supporting museums in the costly task — now underway — of boxing up and safely storing valuable artworks.

As for her meeting with Putin, McDonald felt her treatment at the autocrat’s hands was rather rude, leaving her “skin crawling.” As the Russian male guests retired with the president to another room after the dinner and cultural chit-chats, she gladly retreated to her hotel.