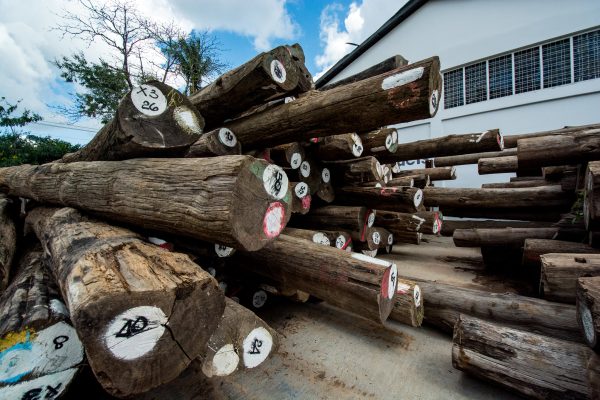 Teak logs awaiting inspection in a factory yard in Yangon, Myanmar, on September 21, 2016.

American companies continue to import teakwood from military-ruled Myanmar in apparent violation of U.S. sanctions, an advocacy group said in a report released yesterday. Justice for Myanmar (JFM), a Myanmar-based human rights group, found that U.S. companies have imported nearly 1,600 tons of teak from Myanmar since the military’s seizure of power, purchases that are helping to fund its “campaign of terror.”

Since the coup in February last year, Myanmar’s military junta has met mass public protests with bloody repression that has killed at least 1,461 people and displaced tens of thousands.

The U.S. government has responded with a raft of economic sanctions targeting the military leadership and enterprises linked to it. Among these were the state-owned Myanma Timber Enterprise (MTE), which has sole control for the sale of timber in Myanmar, including auctioning logs to private companies for export. As the Treasury Department noted in announcing the sanctions in April, MTE is one of the “key economic resources for the Burmese military regime that is violently repressing pro-democracy protests.”

Despite these sanctions, JFM’s report, which is based on shipping records from global trade database Panjiva, claims that a number of U.S. companies were importing teak from Myanmar as recently as December.

In particular, the report counted 82 timber shipments from Myanmar to the U.S. between February and November 2021, which “largely consisted of teak board and scantling that are used for shipbuilding, outdoor decking, and furniture.” This amount of trade, JFM said, was “consistent” with previous years. In 2020, there were 85 such shipments, following 104 shipments in 2019.

The shipments involved multiple U.S. timber wholesalers and manufacturers. Around half of the imports were made by the South Carolina-based East Teak Fine Hardwoods, but purchases were also made by J. Gibson McIlvain, Kingsley Bate Warehouse, Lumberbest, and World Panel Products, among other companies.

“The evidence shows that the sanctions have not stopped the flow of teak to the U.S., and therefore have not stopped the flow of funds from the timber trade to the illegal military junta,” stated the report. “The companies who are aiding the Myanmar military and trading with the entities it controls, are complicit in the crimes committed by the Myanmar military.”

In its coverage of the report, Mongabay cited statistics from the Extractive Industries Transparency Initiative, a global watchdog group, claiming that Myanmar’s government received almost $100 million in revenue from taxes and royalties on the timber trade in the 2017-2018 financial year.

According to JFM, the U.S. firms “are evading sanctions by not buying directly from MTE,” instead buying timber from private companies acting as brokers in Myanmar. “These private companies include major teak traders, some of which have reportedly placed winning bids at MTE auctions since the attempted coup,” the report states. After winning MTE bids, they export their timber to the U.S. either directly or via third countries like China. As a result, “the overall amount of teak exported since the attempted coup is expected to be significantly more” than the amount that shows up in the official statistics.

JFM argues that it would be relatively straightforward for the U.S. government to enforce the Lacey Act, which prohibits the importation of illegally sourced timber. It might be hard to determine how Myanmar-sourced timber is harvested, given the opacity of the industry, but “when a company exercises due care in tracing the origin of its timber, it should easily uncover MTE in the supply chain.”

Whether or not these firms are purposely seeking to circumvent sanctions remains unclear, but the report demonstrates the difficulty that the U.S. government faces in ensuring broad compliance with its sanctions. While the development of global financial networks centered on the U.S. financial system has in theory given Washington powerful leverage over its adversaries, the very complexity and attenuation of these networks often throws up barriers to effective enforcement.