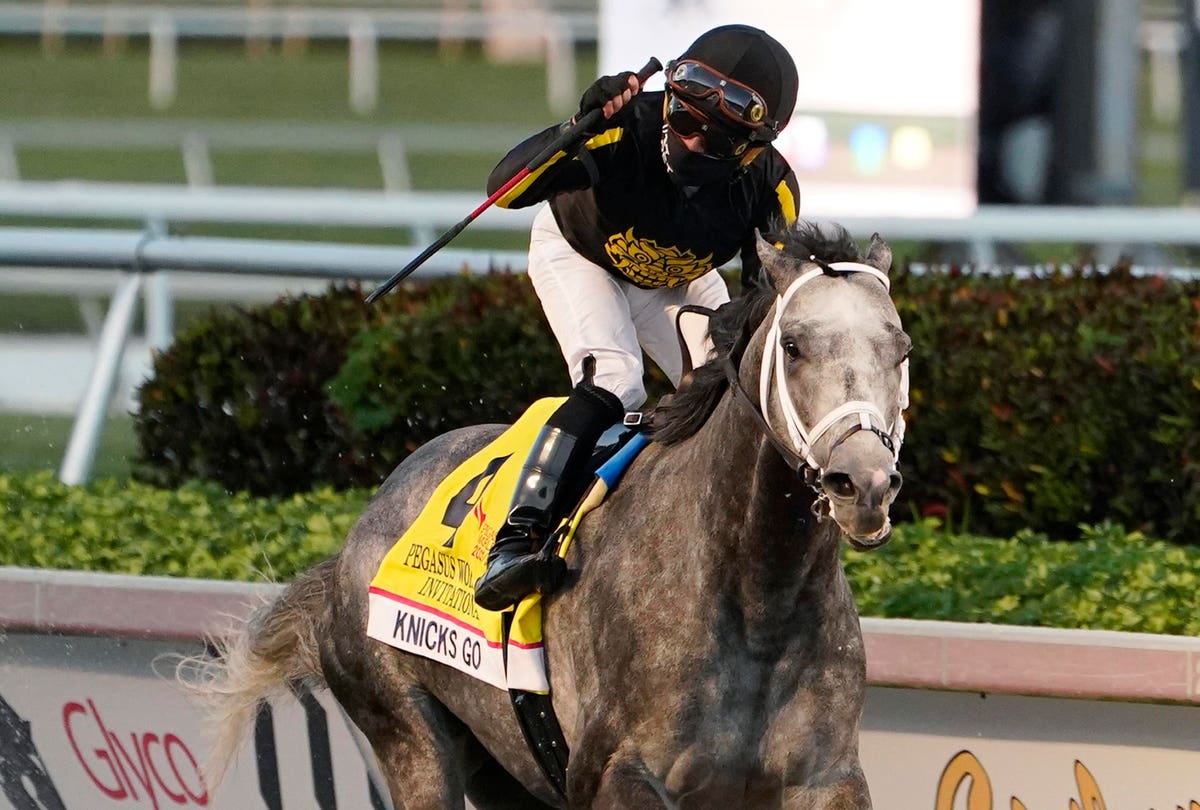 The 2022 Pegasus World Cup Invitational is Saturday, Jan. 29 and the $3 million dollar 1 1/8 mile race headlines a 12 race card at Gulfstream Park featuring seven graded stakes races. But with returning Pegasus World Cup champ and 2021 Breeders’ Cup Classic winner Knicks Go (6-5) a heavy co-favorite along with Breeders’ Cup Mile champion Life Is Good (7-5), there is not much competition on top for the winner of this year’s biggest early season race.

“He is the speed of the speed in this event, and his work pattern leading up to this race signal all systems go,” says Super Screener author and handicapper Mike Shutty.

But Knicks Go faces a tougher challenge in this year’s Pegasus from 4-year-old star Life Is Good, who will likely apply early pressure to Knicks Go and engage in a match-type race up front.

If you’re looking for that long shot with the best chance to finish 3rd or 4th in this race, the Super Screener has landed on Stilleto Boy (20/1), who finished 5th behind Knicks Go and runner-up Medina Spirt in the Breeders’ Cup Classic.

TVG will be reporting live from Las Vegas throughout the the National Horseplayers Championship, and all the races are featured on TVG’s video streaming service from tracks across the country. One of TVG’s reporters also qualified and is participating in this year’s NHC.

“There’s nothing like it,” said TVG reporter Dave Weaver, who qualified for NHC at Keeneland last October. There are eight mandatory races that contestants are required to wager $2 to win and $2 place, and then 10 other optional races to select from and include the same wagers as part of the contest from eight different race tracks.

Friday’s Day 1 has 509 players starting, and they make up this year’s field of 643 entries (134 players double-qualified with the maximum of two entries). From proven professionals to tournament rookies looking to find their stride, all horse players and contestants are hoping the horseshoe fits following Day 2 on Saturday. The top 64 players (top 10 percent) make the money ($10,000) and advance to Sunday’s semifinal round and then the final table with payouts starting at $55,000. The $3.5 million prize pool will award a top prize of $725,000 to the winner.

The NHC is the richest and most prestigious horse handicapping contest in the world. There are no buy-ins to the NHC as all players in the contest field earned their way into the prestigious event by qualifying in a NTRA-sanctioned qualifying contest held during the previous 12 months.

“Interest in the NHC and NHC Tour has never been stronger,” said National Thoroughbred Racing Association COO and NHC Tournament Director Keith Chamblin. That’s shown by growing tournament fields and need for more space after the NHC moved from its previous home since 2012 at Treasure Island on the Las Vegas Strip to Bally’s in 2020.

“We’re so appreciative of the team at Bally’s, our partners who hosted qualifiers in 2021, the NTRA staff, and, or course horseplayers for all their support that makes the NHC a better experience every year.”

The tournament format for the NHC is meant to be the best possible test of overall handicapping ability. The mandatory races are determined by a four-person Race Selection Committee. I talked to one of the committee members, Jim Mulvihill of the Colorado Horsemen’s Association and former NTRA Director of Media about the process.

“The committee looks for larger, competitive fields,” Mulvihill said. Thus the Pegasus World Cup was left out this year. He adds that the committee wants to provide “balanced race conditions and geographic diversity, along with different surfaces to make it more of a handicapping challenge.”

How the races fall into time slots for tournament spacing along with some desired stakes races like Saturday’s Gulfstream card is all part of the selection process.

Saturday’s NHC Day 2 will be most anticipated with four of the eight mandatory races from Gulfstream Park in Hallandale, FL where top track announcer Pete Aiello calls the races.

You can follow the NHC leaderboard Friday and Saturday ahead of Sunday’s finals.

“He’ll be within striking distance turning for home and ready to pounce with a better trip,” Super Screener notes. “Atone is highly consistent and productive producing an 8-for-10 record in the Trifecta on turf, and he offers tremendous value.”

Super Screener notes the high payout potential of the 12 horse field in the Pegasus Turf, which includes four runners from trainer Mike Maker’s barn with Atone a closer and the top longshot bet at long odds. But last year’s Pegasus Turf winner Colonel Liam (3/1) is also one to include as a win contender with leading jockey Irad Ortiz, Jr. riding for top trainer Todd Pletcher. Colonel Liam rallied from off the pace in last year’s race to get up and win by a neck.

The other mandatory races Saturday at Gulfstream are a minor stakes in Race 6 at 1 mile 70 yards on the Tapeta all-weather surface. Race 7 is the $200,000 W.L. McKnight (G3) at 1 1/2 miles on the turf. Race 8 is the $200,000 Inside Information (G2) for fillies and mares racing 7 furlongs on the main dirt track. And then Race 11 and the $1 million Pegasus World Cup Turf at 1 1/8 miles will be the second to last mandatory race of the day for NHC tournament players to add to their points total in hopes of making it into the money and Sunday’s final day of the NHC.

Racing fans wanting to get in on the wagering action can enjoy risk-free bets when signing up at TVG, and enjoy added promotions by celebrating the Pegasus World Cup with a refund on your first win bet when the horse you bet on finishes 2nd or 3rd on all seven graded stakes races Saturday at Gulfstream Park.

That’s a bet the tournament horseplayers wouldn’t pass up.

You can bet on it.