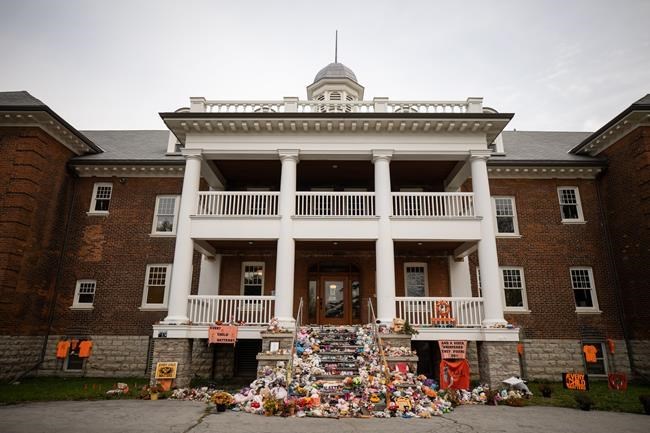 In The News is a roundup of stories from The Canadian Press designed to kickstart your day. Here is what’s on the radar of our editors for the morning of June 21 …

Diane Hill had just celebrated her seventh birthday when she first arrived at the Mohawk Institute Residential School in Brantford, Ont., in November, 1963.

“The first night there I was crying,” said Hill, a retired Mohawk languages teacher at Six Nations of the Grand River.

She describes the institute as “hell on earth.” When asked how long she was there, she replies, “too long.”

“You can’t imagine that in the human world: what we witnessed, what we smelled, what we saw, what we felt, what was committed against the children,” said Hill. “Yes, we had tuberculosis go through. We had medical epidemics such as smallpox, various scarlet fevers, go through.”

Hill sits on the board of directors of the Survivors’ Secretariat, an organization dedicated to sharing the truth of what happened at the Mohawk Institute. She said she’s heard from many people who had never heard of residential schools.

Hill said she typically does many interviews leading up to this day, recognized Tuesday countrywide as National Indigenous Peoples Day, which falls on the same day as the summer solstice.

“I am devoting my day to just attending events,” she said. “I just want to go out and feel the unity of the people.”

National Aboriginal Day, as it was known at the time, was first recognized in 1996 by the governor general at the time as a way to celebrate the culture and contributions of First Nations, Inuit and Metis peoples.

Saskatchewan is to mark National Indigenous Peoples’ Day by holding a ceremony for the province’s residential school memorial.

The Saskatchewan Party government and Lt.-Gov. Russ Mirasty are to dedicate the residential school memorial on the grounds of Government House.

The event is to be attended by elders and residential school survivors.

The Saskatchewan residential school memorial design, which symbolizes the cycles of the seasons and of life, was first unveiled in September.

The project is the result of one the calls to actions from Truth and Reconciliation Commission, which recommended installing a publicly accessible, highly visible residential school memorial in each capital city.

The government says it is meant to honour survivors and all the children who were lost to their families and communities.

Starting next year, British Columbians will be allowed to carry up to 2.5 grams of illicit drugs — a first in the country, and something experts have been calling for.

M.J. Milloy, a research scientist at the B.C. Centre on Substance Use, says over the last 20 to 30 years many who research substance use have concluded that criminal penalties do not dissuade people from using drugs.

In fact, experts say often drug use is a way for people to try and cope with past trauma or mental health issues, and going to prison can actually make that worse.

And while some oppose decriminalization — including Conservative MPs who call it part of the Liberals’ soft-on-crime approach — people who work with drug users say it’s time to try something different.

Decriminalization does not mean legalizing all drugs, though. It will mean people can possess small amounts of certain substances but those who sell drugs can still be arrested and prosecuted.

The federal government says it will watch what happens in B.C., to ensure there are no “unintended consequences.”

WASHINGTON _ The House 1/6 committee is set to hear from the caretakers of American democracy _ elections workers and local officials _ who fended off Donald Trump’s pressure to overturn the 2020 presidential election, at times despite frightening personal attacks.

The hearings investigating the Jan. 6, 2021, attack at the U.S. Capitol resume Tuesday to probe Trump’s relentless effort to undo Joe Biden’s victory in the most local way _ by leaning on officials in key battleground states to reject ballots outright or to submit alternative electors for the final tally in Congress. The pressure was fuelled by the defeated president’s false claims of voter fraud which, the panel says, led directly to the riot at the Capitol.

Embattled Georgia Secretary of State Brad Raffensperger is scheduled to testify about Trump’s phone call asking him to “find 11,780” votes that could flip the state to prevent Biden’s election victory.

Raffensperger, with his deputy Gabe Sterling and Arizona’s Republican state House Speaker Rusty Bowers, are scheduled to be key witnesses, along with Wandrea “Shay” Moss, a former Georgia election worker who, with her mother, have said they faced such severe public harassment from Trump allies they felt unable to live normal lives.

The Tuesday hearing, the fourth by the panel this month, stems from its yearlong investigation into Trump’s unprecedented attempt to remain in power, a sprawling scheme that the chairman of the Jan. 6 committee has likened to an “attempted coup.”

Tuesday’s focus will review how Trump was repeatedly told his pressure campaign could potentially cause violence against the local officials and their families but pursued it anyway, according to a select committee aide. And it will underscore that fallout from Trump’s lies continues to this day, with elections officers facing ongoing public harassment and political challengers trying to take over their jobs.

While the committee cannot charge Trump with any crimes, the Justice Department is watching the panel’s work closely. Trump’s actions in Georgia are also the subject of a grand jury investigation, with the district attorney expected to announce findings this year.

It took weeks of requests for Zelenskyy to address African nations, many of whom retain close ties to Russia and failed to support a U.N. General Assembly resolution condemning the invasion earlier this year.

Ukraine and the West hope to weaken those ties by emphasizing that Russia’s actions are to blame for dramatic shortages of wheat and edible oils and skyrocketing food and fuel prices across the African continent of 1.3 billion people. Russia’s blockade of Ukrainian exports is a “war crime,” the European Union’s top diplomat, Josep Borrell, said on Monday.

“They are trying to use you and the suffering of the people to put pressure on the democracies that have imposed sanctions on Russia,” Zelenskyy told the AU, whose leaders recently met in Russia with President Vladimir Putin and echoed Moscow’s assertion that Western sanctions are in part to blame for the food security crisis. They appealed to other countries to ensure grain and fertilizer exports from Russia and Ukraine aren’t blocked.

Millions of people in the Horn of Africa, including Ethiopia and Somalia, are now struggling to find food or even humanitarian food aid amid a historic drought. The Associated Press was the first to report hundreds of deaths this year in Somalia alone.

Official reaction to Zelenskyy’s speech was muted. African Union Commission chair Moussa Faki Mahamat, one of those who met with Putin, tweeted that African nations “reiterated the AU position of the urgent need for dialogue to end the conflict.” Current AU chair and Senegalese President Macky Sall tweeted that Africa respects “the peaceful resolution of conflicts and the freedom of commerce.”

Russia is the largest weapons exporter to sub-Saharan Africa, and Moscow emphasizes its long ties with African nations dating to the Soviet Union. Some African leaders, meanwhile, are exasperated by global powers’ efforts to choose one side or another.

Ukraine will press its case again later this week when its foreign minister speaks to Africa-based reporters in a briefing organized by the United States government on how “Russian Federation’s full-scale invasion of Ukraine affects food security on the African continent.”

The EU’s top diplomat said he has written to all African foreign ministers to explain that the bloc’s sanctions on Russia are not responsible for the looming global food crisis, and pledged to work out ways for exports of food and fertilizers to reach their continent.

ORLANDO, Fla. _ Two Florida deputies have each been suspended for about two weeks for leaking news about actor and comedian Bob Saget’s death before his family was alerted, officials said.

The Orange County Sheriff’s Office confirmed Monday that the two deputies were each suspended for 81 hours without pay.

“This case highlights how important it is to allow detectives in death investigations the time to ensure next of kin notifications are made before that information is disseminated to the public,” Orange County Sheriff John Mina said in a statement. “The deputies acknowledged their wrongdoing and were disciplined for their actions.”

One of the deputies told his brother about Saget’s death shortly after responding to the scene, and then the brother posted the information on social media, according to an investigation report.

The other deputy, who was off-duty and not involved in the death investigation, told his neighbour about Saget’s passing, officials said.

Saget, 65, was found by a hotel security officer at the Ritz-Carlton in Orlando on Jan. 9 after he had failed to check out of the hotel and his family had asked for a well-being check. A medical examiner later determined that the “Full House” and “America’s Funniest Home Videos” star had died from an accidental blow to the head, likely from a backward fall.

OTTAWA _ MPs are being given panic buttons to increase their personal security following a series of threats, and rising concern about harassment of Parliamentarians.

In an interview, Public Safety Minister Marco Mendicino revealed he has been subject to death threats on social media in recent weeks, after presenting a bill curbing gun ownership.

Mendicino said he, police, and Parliamentary Protective Services, are reassessing the security of MPs after a series of threats and intimidating incidents.

A video shows Singh encountering protesters as he left the campaign office, who can be heard shouting expletives at him and calling him a “traitor”’ as he gets inside a vehicle. Singh has said the experience in Peterborough, Ont., was one of the worst incidents of aggressive behaviour in his political career.

Among the measures being rolled out to boost protection for MPs are panic buttons, or “mobile duress alarms,” which they can carry around to immediately alert Parliamentary Protective Services or local police for a rapid response if they are facing a threat.

The sergeant-at-arms, in a presentation to Liberal MPs about new security measures, strongly recommended that they keep the panic button with them “at all times.”

The device can be used across Canada, including in their constituencies, the presentation said.

This report by The Canadian Press was first published June 21, 2022.