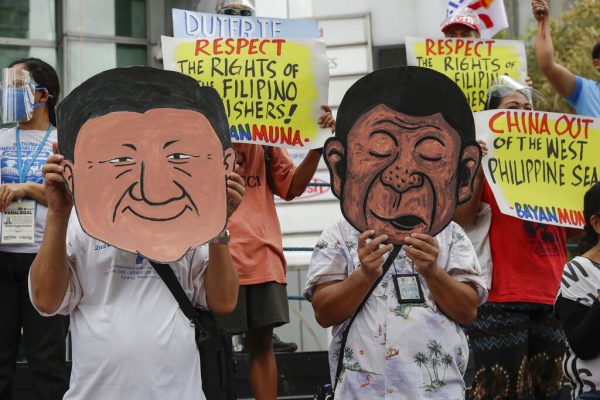 Over the last two decades, China-Philippines relations have swung from a “golden age” to “Asia’s most toxic relationship” to a “springtime.” These fluctuations are the result of the turnover of presidential administrations in the Philippines, with each individual leader having their own preferred ways of dealing with China.

Under the country’s constitution, each president “may only serve for one term” and is “ineligible for reelection.” Without having to run again, the president is more likely to pursue her or his personal interests. The term limit also makes it more difficult to maintain the current foreign policy since the successor is likely to change it. There are factors that facilitate the presidents’ preferences; however, they are not free from constraints.

President Gloria Macapagal Arroyo (2001-10) advocated a close relationship with the People’s Republic of China (PRC) while continuing to value the Philippines’ alliance with the United States, as expressed in this 2004 speech on Philippine foreign policy. As an economist, she prioritized trade and investment opportunities with China over the South China Sea disputes, which were in any case relatively calm until her final year in office. Arroyo also saw economic growth as a key to gaining legitimacy for her administration. At the same time, she enjoyed “a strong relationship” with the United States and treasured the “century-old bond” between the two nations.

Arroyo consolidated her power by generously rewarding her allies with appointments to key positions. As a result, her China policy gained support from top military officers and major business interests. Meanwhile, China’s promise of a peaceful rise in the first half of 2000s made it relatively safe for Arroyo to promote close ties with Beijing at home.

However, Arroyo and her allies were criticized for signing non-transparent and overpriced projects with the Chinese and even accused of trading the Philippines’ sovereignty for personal benefits. Meanwhile, China became more assertive in pushing its claims in 2009, when it officially submitted to the United Nations a map containing its “nine-dash line,” laying claim to almost the entire South China Sea.

Unlike his predecessor, President Benigno Aquino III (2010-16) preferred a confrontational approach in dealing with China and doubled down on the alliance with the United States. Known for his honesty and transparency, Aquino associated softness toward China with corruption. A strong stance on the disputes in the South China Sea, where tensions spiked during his term in office, set his government apart from the previous administration.

Following a standoff between the Philippines’ largest warship and Chinese surveillance vessels at Scarborough Shoal in 2012, China took control of the area and embarked on major construction activities. More provocatively, the PRC in 2013 began converting several reefs and rocks in the South China Sea into artificial islands equipped with military facilities.

Faced with Beijing’s provocative actions in contested waters, Aquino reiterated the need to modernize the Armed Forces of the Philippines (AFP) and stressed the treaty alliance with Washington. The United States has provided the Philippines patrol vessels, fighter jets, and other equipment to improve the latter’s military capability. Under Aquino’s presidency, the Philippines and the United States signed the Enhanced Defense Cooperation Agreement in 2014.

Most notably, the Aquino administration filed a landmark arbitrational case challenging the legality of China’s “nine-dash line” and urged Beijing to cease its illegal activities in the South China Sea. The Chinese government refused to participate in the arbitration, but its absence could not impede the proceedings. On July 12, 2016, the arbitrational tribunal unanimously awarded a ruling in favor of the Philippines. The South China Sea legal case soured China-Philippines diplomatic relations, even though there was no major impact on trade ties.

In contrast to President Aquino, President Rodrigo Duterte, following his election in 2016, declared his desire to realign with China and separate from the United States both militarily and economically. While the Obama administration strongly criticized the Philippine president’s extrajudicial killings of alleged drug dealers, the Chinese government supported his policy and urged the international community to respect the Philippines’ sovereign rights.

In exchange for China’s investment, Duterte has constantly downplayed the 2016 arbitral ruling and turned a blind eye to China’s construction and aggressive behavior in the South China Sea. The Philippine president said his country “cannot stop China” from its activities in disputed waters because it was too powerful. Although Duterte’s popularity at home has allowed him to promote close ties with China, his approach has increasingly come under domestic criticism. After five years, little of Beijing’s pledged $24 billion in infrastructure investment has materialized, and China has been aggressively pushing its claims in the South China Sea.

In February 2020, Duterte announced his decision to terminate the Visiting Forces Agreement (VFA) between the Philippines and the United States, signaling a major break in the two countries’ alliance. However, the importance of the U.S. military in the Philippines’ military blueprint has made it difficult for the president to definitively shelve the treaty alliance. Having suspended the VFA termination twice, in July 2021, Duterte decided to cancel the abrogation after meeting with U.S. Defense Secretary Lloyd Austin III. The VFA remains intact.

In May 2022, the Philippines will hold a presidential election. Dozens of candidates have registered to run for the top seat. Front-runners include Ferdinand Marcos Jr. (son of the late dictator Ferdinand Marcos), Leni Robredo (sitting vice president), Francisco Domagoso (mayor of Manila and former actor), and Manny Pacquiao (former boxing star).

Marcos said that Duterte was dealing with China “the right way,” and that reaching a “bilateral consensus” with Beijing was the “most important” approach. Former Senator Antonio Trillanes IV has warned that Duterte’s foreign policy on China and the South China Sea will continue if Marcos wins the 2022 election.

Robredo has indicated her intention to pursue an “inclusive and independent” foreign policy. Learning from Vietnam’s approach to dealing with China, her administration would cooperate with Beijing in non-conflict areas, such as trade and investment. But when it comes to the South China Sea, she said the PRC must recognize the 2016 arbitral ruling before pursuing any joint exploration of resources with the Philippines. Robredo has further stated that China’s infringement into Philippine waters was the “most serious external threat” that the country has faced since World War II. She would strengthen the Philippines’ alliance with the United States to help protect the South China Sea.

Pacquiao has criticized Duterte’s friendly relationship with China, saying that the latter was too soft over territorial disputes in the South China Sea. Domagoso has meanwhile vowed to be “fearless in fighting” for the Philippines’ sovereign rights in the South China Sea and will “insist [on] The Hague ruling” should he win the 2022 election. These two candidates aim to win the presidency by breaking with Duterte and talking tough on China.

Given the power that the president has to shape the Philippines’ foreign policy, whoever wins the upcoming election will largely decide the country’s approach to dealing with China and the United States. Philippine former Foreign Secretary Albert del Rosario has suggested that Beijing may have influenced the outcome of a 2016 election that brought Duterte to power. Whether or not that is true, there is a troubling question about a “Manchurian candidate” (a puppet used by a foreign power) in the 2022 election. It is of U.S. interest to help the Philippines insulate itself from any foreign interference in the run-up to the election.