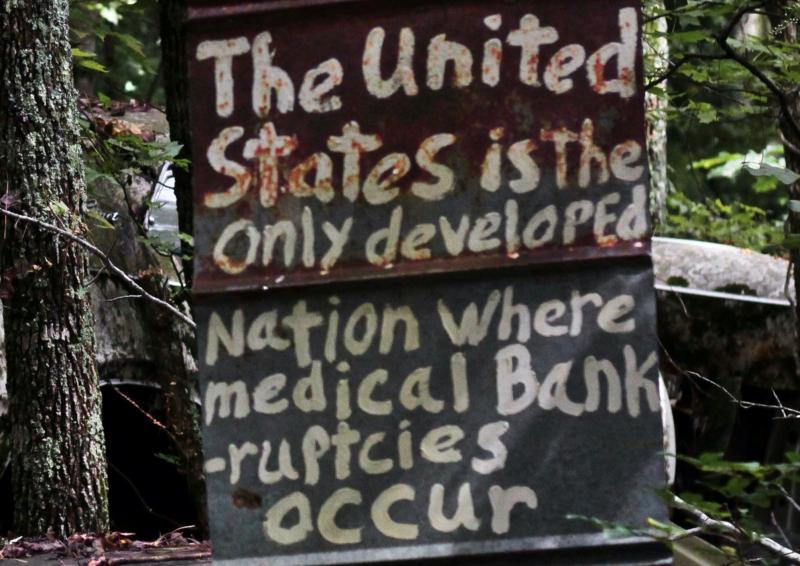 An investigation published last week reveals that healthcare debt is “far more pervasive” in the United States than previously known, currently impacting 41% of U.S. adults and more than 100 million people across the country.

“We’ve built a healthcare system that is more effective at extracting money from people than caring for them.”

Previous attempts to assess the extent of the medical debt crisis have understated the problem because, according to a joint study by Kaiser Health News and NPR, “much of the debt that patients accrue is hidden as credit card balances, loans from family, or payment plans to hospitals and other medical providers.”

In an effort to more accurately estimate how much of the U.S. population is facing healthcare debt—a largely foreign concept to people in countries with universal coverage systems that restrict out-of-pocket costs—the two outlets conducted a new survey “designed to capture not just bills patients couldn’t afford, but other borrowing used to pay for healthcare as well.”

The results, combined with new analyses of hospital billing and credit card data, show that more than half of U.S. adults report going into debt because of medical or dental bills over the past five years.

“More than 100 million people in America―including 41% of adults―beset by a healthcare system that is systematically pushing patients into debt on a mass scale,” the investigation found. “A quarter of adults with healthcare debt owe more than $5,000. And about one in five with any amount of debt said they don’t expect to ever pay it off.”

Dr. Rishi Manchanda, the CEO of Health Begins, told KHN that “debt is no longer just a bug in our system.”

“It is one of the main products,” Manchanda added. “We have a health care system almost perfectly designed to create debt.”

We’ve built a health care system that is more effective at extracting money from people than caring for them. I think that is the lesson:https://t.co/zRhxur09xm

KHN and NPR‘s new survey also shows that around one in seven people with healthcare debt in the U.S. say they have been denied access to a hospital or another provider because of unpaid bills and two-thirds have forgone care because of the cost. Respondents also reported cutting back on food, moving out of their homes, and declaring bankruptcy because of healthcare debt.

“Now, a highly lucrative industry is capitalizing on patients’ inability to pay,” KHN reported. “Hospitals and other medical providers are pushing millions into credit cards and other loans. These stick patients with high interest rates while generating profits for the lenders that top 29%, according to research firm IBISWorld.”

A study published last year in the Journal of the American Medical Association estimated that people in the U.S. now owe collection agencies a staggering $140 billion due to unpaid medical bills, a major increase from prior estimates of around $81 billion.

“It’s barbaric,” lamented Dr. Miriam Atkins, a Georgia oncologist who told KHN that she has had patients stop their treatment due to fear of racking up massive debt.

In April, the Biden administration announced several initiatives aimed at providing relief to millions of people harmed by healthcare debt. The actions included a push to eliminate medical debt as a factor in determining eligibility for credit and debt forgiveness for “low-income American veterans.”

But the administration’s moves are unlikely to have much impact on the nation’s overall medical debt crisis.

In 2019, as part of his presidential campaign, Sen. Bernie Sanders (I-Vt.) proposed wiping out all U.S. medical debt, calling it “immoral and unconscionable.” But the senator’s proposal has not gained any traction in Congress.