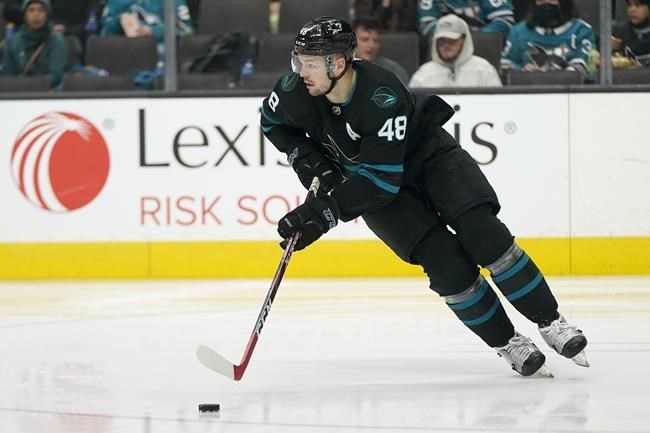 SAN JOSE, Calif. (AP) — Valeri Nichushkin scored two goals and the Colorado Avalanche withstood a late San Jose rally to beat the Sharks 5-3 on Friday night for their third victory in a row.

SAN JOSE, Calif. (AP) — Valeri Nichushkin scored two goals and the Colorado Avalanche withstood a late San Jose rally to beat the Sharks 5-3 on Friday night for their third victory in a row.

Cale Makar added a goal and two assists and Nazem Kadri and Darren Helm also scored for Colorado, which leads the NHL with 93 points and is 27-5-3 since Jan. 1.

With goalie Darcy Kuemper getting the night off, Pavel Francouz started for Colorado and made 25 saves. The Avalanche have won 10 of their past 12 against San Jose.

Trailing 4-0, the Sharks got a goal from Jeffrey Viel late in the second period. Rudolfs Balcers made it 4-2 and Erik Karlsson’s goal with 1:25 remaining cut the deficit to one. San Jose pulled goalie Zach Sawchenko but couldn’t force overtime.

Nichushkin scored an empty-netter for the final margin.

“I didn’t love the finish tonight so that’s what’s kind of sitting with me,” Colorado coach Jared Bednar said. “But you’ve got to give San Jose some credit too. They’ve got some good players and you keep putting them on ice in power play and eventually they’re going to make something happen.”

With 93 points and a 44-13-5 record, Colorado is off to the best start in franchise history through 62 games. Earlier this week, the Avalanche bolstered their roster by acquiring defenseman Josh Manson from Anaheim and center Nico Sturm from Minnesota.

Sturm made his Colorado debut Friday and had two shots on goal.

Kadri opened the scoring with a power-play goal off a beautiful pass from Mikko Rantanen in the first period, and Helm gave Colorado a 2-0 lead after one.

When Makar scored just 34 seconds into the second for a 3-0 Avalanche lead, it appeared a rout was in store until the Sharks swung momentum.

“Not the start we were looking for,” Viel said. “But we fought back in the third and got close at the end. Obviously we need to play a full 60, especially against a team like Colorado.”

Makar leads NHL defensemen with 22 goals. That’s the most by a defenseman since San Jose’s Brent Burns had 29 during the 2016-17 season.

It’s part of a trend. Colorado’s defensemen have scored an NHL-best 52 goals this season, which is one shy of the franchise record of 53 goals set in 1992-93 by the then-Quebec Nordiques. The Avalanche’s 52 goals are the most by a core of defensemen since Nashville had 56 in 2017-18.

Kadri’s goal extended Colorado’s hot streak on the power play. That gave the Avalanche eight goals in their past 17 chances with the man advantage.

It appeared San Jose had grabbed an early lead when Logan Couture sprang loose with the puck in open ice and beat Francouz at 6:07 of the first. But referees reviewed the play and ruled Couture was offside.

Sharks: Host the Arizona Coyotes on Sunday for the second of three meetings between the teams.