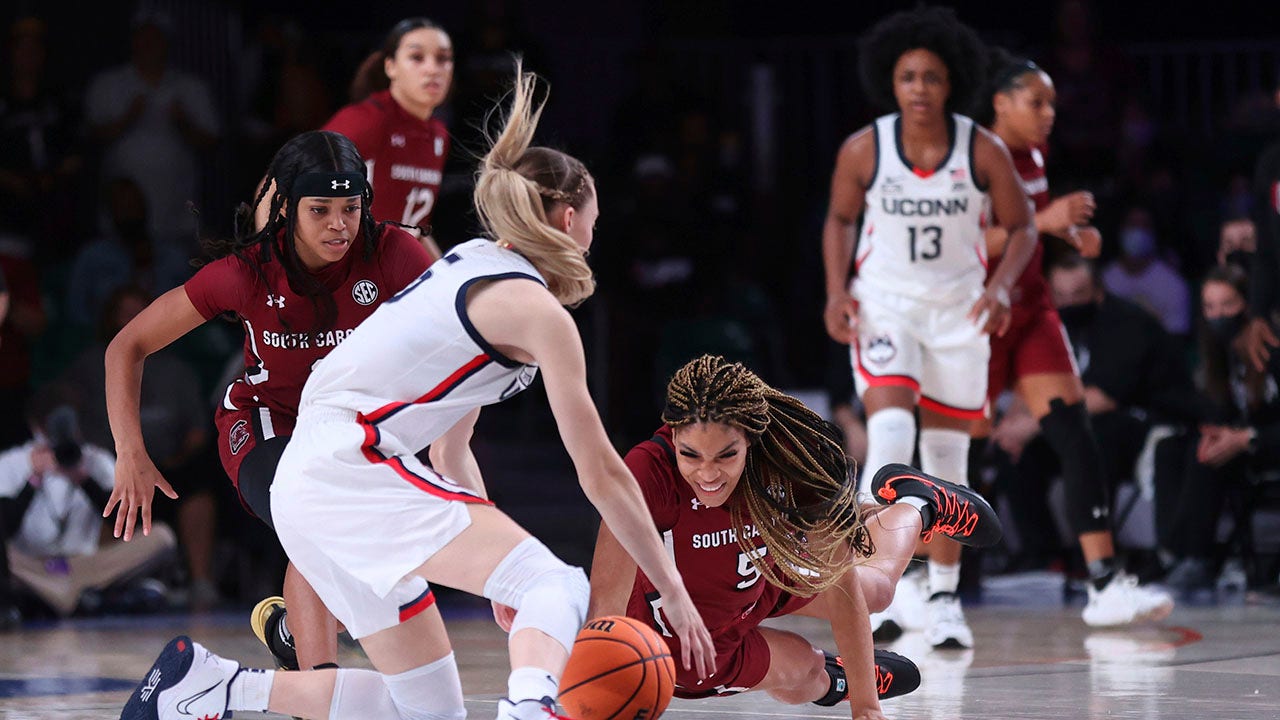 This was the 61st meeting between the top two teams in the women’s AP Top 25 poll and the sixth time it has happened in November. The No. 1 team holds a 38-23 advantage. The last meeting of the top two teams before Monday was between these same squads back in February. UConn was the No. 2 team and won 63-59 in overtime.

Trailing by 52-50 late in the third quarter, South Carolina turned up its defense, holding UConn without a field goal for 7:38 spanning the final two periods. By the time Evina Westbrook hit a 3-pointer from the wing with 5 minutes left, the Huskies trailed 63-57. They’d get no closer, as Destiny Littleton quickly answered with a 3 on the other end to restore the comfortable margin.

She had hit a 3-pointer late in the third period to give the Gamecocks a 57-54 advantage heading into the fourth.

South Carolina, which outrebounded UConn 42-25, held the Huskies to just three points in the fourth quarter.

Paige Bueckers, UConn’s sophomore sensation, had 19 points to lead the Huskies, who had won nine of the 10 previous meetings between the schools.

With the championship game taking place around the same time the poll is released each Monday, the AP decided to delay the poll for a day so it will reflect the outcome – only the second time since the poll began in 1976 that it has been delayed.

The only other time also involved UConn. The second-ranked Huskies were playing No. 1 Tennessee on Jan. 16, 1995, in the first meeting of their storied rivalry. The Huskies pulled off the upset victory and moved to No. 1 for the first time in school history.

UConn couldn’t do it again on Monday.

It was an entertaining first half played at the Atlantis Resort inside a converted ballroom that had a loud spirited crowd supporting both teams. South Carolina jumped out to a 6-0 lead before UConn went on a 20-2 run sparked by senior center Olivia Nelson-Ododa. She had two blocks and drew an offensive foul in the span of a minute during the burst. The Huskies, who once were up by 13, led only 20-14 after one quarter.

The defensive intensity continued in the second quarter as the Gamecocks were able to whittle down their deficit to 36-33 at the half. They continued to chip away in the third quarter before the big run that gave them control of the game.

This was the first of two meetings this season between these teams. The Huskies will visit South Carolina on Jan. 27. Both teams expect to be much improved by the second matchup.

South Carolina: This was the third win over a top-10 team for the Gamecocks. They’ve already beat No. 5 North Carolina State and ninth-ranked Oregon .

UConn: The Huskies fell short because they couldn’t get enough offense to help Bueckers.

UConn has been involved in 26 of the 1-vs-2 games and has gone 22-4 in those contests, winning the previous nine before Monday’s loss.

THE CHAMP IS HERE

Coach Dawn Staley brought more than her top-ranked South Carolina team to the inaugural women’s Battle 4 Atlantis. Her best pal — 4-year-old dog Champ — is alongside her as she walks the resort, with fans recognizing him by name, in the locker room and even at news conferences.