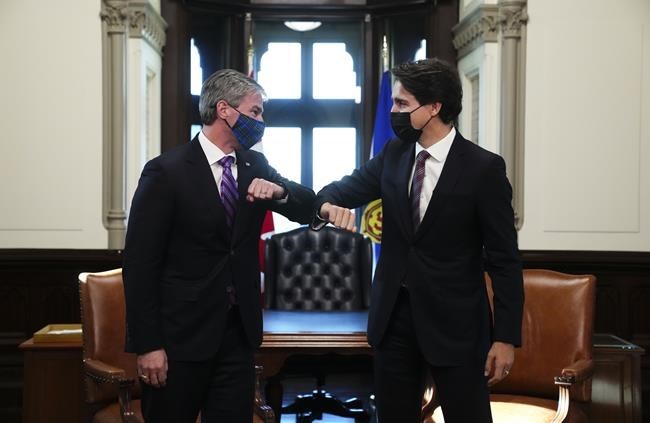 OTTAWA — Nova Scotia’s premier may not have secured any funding commitments on Monday, but Tim Houston said he felt encouraged by his first in-person meeting with Prime Minister Justin Trudeau.

OTTAWA — Nova Scotia’s premier may not have secured any funding commitments on Monday, but Tim Houston said he felt encouraged by his first in-person meeting with Prime Minister Justin Trudeau.

Houston told reporters after meeting the prime minister in Ottawa that he received an “enthusiastic response” from Trudeau during their discussions on health care, immigration and the environment.

“I feel very confident that we are on the same page,” Houston said. “I have no reason to feel discouraged after that meeting.”

The premier said he pressed Trudeau for help building the $5-billion Atlantic Loop electricity grid and for federal money to fund a three-year, $70-million pilot project to increase access to mental health care in his province.

Houston said the prime minister recognizes that the Atlantic Loop project — which would bring more hydroelectricity from Quebec and Newfoundland and Labrador to the region — is a big part of the province’s strategy to get off coal.

“I would call it the most direct route to making that happen,” Houston said, adding that he also stressed to Trudeau that the cost of eliminating coal-fired electricity in Canada would fall disproportionately on Atlantic Canadians.

“We know that getting off coal is critical, but we also know that it can’t all fall to the shoulders of the ratepayers of Nova Scotia,” the premier said. “The prime minister’s team knows that, agrees with that, so we will continue to work on the details of that.”

Houston said he sought specific help from Trudeau on a project that would create 16 mental health and addiction clinics across the province in order to improve access, especially for youth. He said that while Canada has a universal health-care system, mental health support has slowly drifted away from the public model and is not fully accessible to everyone who needs it.

“Canadians are very proud of our health-care system,” he said. “But over time, addictions and mental health has kind of got to an area where it’s a two-tiered system.”

This report by The Canadian Press was first published Nov. 22, 2021.

— By Keith Doucette in Halifax