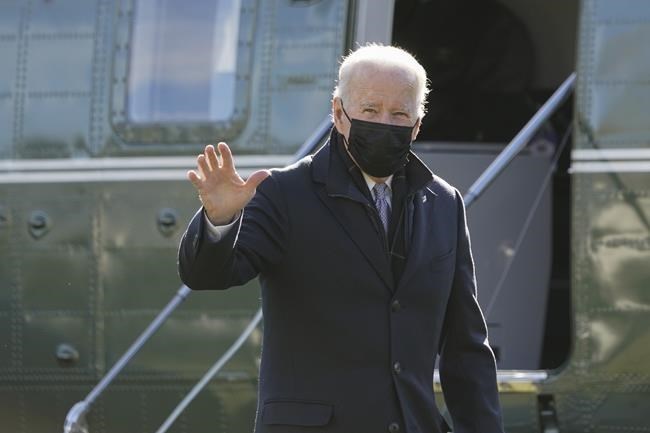 WASHINGTON — Fresh from his Jan. 6 vow to defend democracy, President Joe Biden is in Georgia Tuesday to make his case for protecting voting rights in the United States.

WASHINGTON — Fresh from his Jan. 6 vow to defend democracy, President Joe Biden is in Georgia Tuesday to make his case for protecting voting rights in the United States.

Democrats have been insisting for months that defending the right to vote from state-level limitations is a critical step in preserving America’s democratic values.

“This is one of those defining moments, it really is,” Biden said outside the White House as he departed for Atlanta, where he’ll use his bully pulpit to urge Congress to pass his voting reform package.

He’s also expected to endorse the idea of a temporary “carve-out” exception to the filibuster rules that require 60 votes for bills to pass the Senate, a tall order in a chamber evenly divided between Democrats and Republicans.

“People are going to be judged, where were they before and where were they after the vote. History is going to judge this … and so the risk is making sure people understand just how important this is,” Biden said.

Republicans, however, say the Freedom to Vote Act and John Lewis Voting Rights Advancement Act are simply measures aimed at preventing them from taking power.

In a 50-50 Senate, the bills have focused fresh attention on Capitol Hill’s two most coveted Democratic votes: West Virginia’s Joe Manchin and Kyrsten Sinema of Arizona. Majority Leader Chuck Schumer has also promised a vote on the filibuster, which both say they want to preserve.

“The next few days, when these bills come to a vote, will mark a turning point in this nation,” Biden will say later Tuesday in Atlanta, according to an excerpt of his speech released by the White House.

“I will not yield. I will not flinch. I will defend your right to vote and our democracy against all enemies foreign and domestic. And so the question is, where will the institution of the United States Senate stand?”

White House press secretary Jen Psaki described the moment Monday as a rare one in the country’s history, where “the essential is immediately ripped away from the trivial.”

“We have to ensure Jan. 6 doesn’t mark the end of democracy, but the beginning of a renaissance for our democracy,” Psaki said, referring to last year’s storming of Capitol Hill by Donald Trump supporters intent on preventing confirmation of Biden’s victory.

“We stand up for the right to vote and have that vote counted fairly, not undermined by partisans afraid of who you voted for, or who try to reverse an outcome.”

An analysis released last year by the Brennan Center for Justice found that 19 states passed 33 new laws in 2021 that stiffen the rules around voting, particularly with regards to voter ID and using early or mail-in ballots.

In Georgia, it’s illegal to provide water or food to people waiting in long lines at polling stations. Texas has made it against the law to encourage voters to request mail-in ballots or to regulate the behaviour of poll watchers.

“Whether it’s education, health care or anything of that sort, being able to exercise their rights to have a say in those decisions — this is how democracy works,” said Alice Huling, a voting rights expert and general counsel for Campaign Legal Center, a non-profit advocacy group focused on electoral issues.

“Unfortunately, that ability — the freedom to have a say in those decisions — has been facing multiple threats.”

Many of those threats have been in direct response to former president Trump’s persistent and ongoing efforts to undermine the results of the 2020 election, which by every measure, legal and otherwise, legitimately elevated Biden to the White House.

Critics say the measures represent a broad, concerted effort to disenfranchise certain voters in the U.S., particularly low-income Americans and people of colour, and to make it easier to challenge legitimate election outcomes.

The antidotes, they say, are already before Congress.

If passed, the Freedom to Vote Act would establish minimum federal standards for voting access and make it harder for partisan actors to jerry-rig the process. The John Lewis bill, named for the late Georgia congressman and civil rights champion, is designed to limit discrimination at the ballot box.

Charles Bullock, a politics professor at the University of Georgia, said Democrats are clearly staking their political future on the issue of voting rights — and may also be overstating the risk of inaction as a result.

“It is an issue that mobilizes the Democratic base better than about anything else,” Bullock said in an interview, dismissing fears of a total disenfranchisement of Black voters in Georgia and a return to the Jim Crow era.

“Those who characterize the Georgia law, the Texas law as being Jim Crow 2.0 simply have no idea what Jim Crow did, which actually did pretty much eliminate Black participation,” he said.

“Well, that’s not going to happen today. By Democrats campaigning against these laws and using them to motivate their base, we may actually see higher participation (in elections).”

This report by The Canadian Press was first published Jan. 11, 2022.