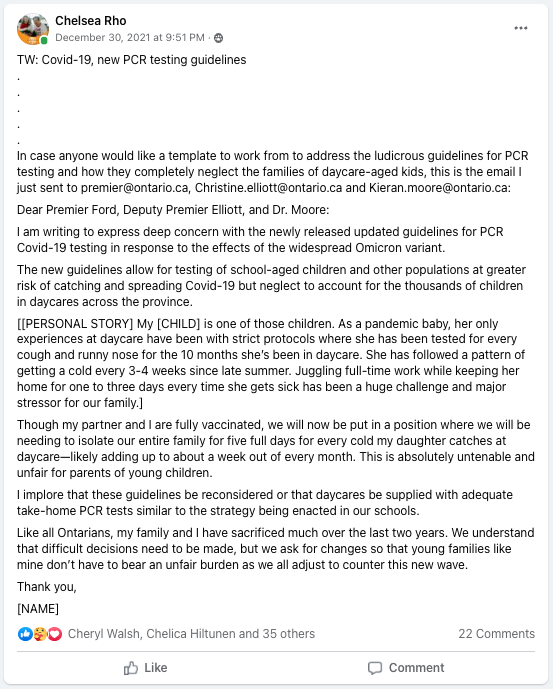 With the recent changes in Ontario’s COVID-19 testing strategy, large portions of the population are no longer eligible for a PCR test.

Parents with children under five who attend daycare are raising a red flag, saying their kids and daycare workers have been entirely forgotten in the revised guidelines, which also include the suspension of reporting COVID-19 cases in schools and daycares.

A petition demanding that the Ford government reconsider the testing guidelines for daycare settings has garnered over 7,500 signatures and counting.

The petition was launched on Dec. 31 by Toronto resident Naomi Carniol, mother to a 5-year-old and 2.5-year-old. Within a week, thousands of other parents have joined her calls to restore access to PCR testing for daycare kids and workers or at the very least, for them to be supplied with at-home PCR tests or even Rapid Antigen Tests.

Carniol was inspired by another Toronto mother who wrote a letter addressed to Premier Doug Ford, Health Minister Christine Elliott and Chief Medical Officer Kieran Moore and then made it available as a template on a Toronto parenting Facebook group for others to use.

Chelsea Rho wrote the letter on Dec. 30, the day the new guidelines were revealed. She tells CityNews that after she heard the news, she felt frustrated overwhelmed and helpless. She chose to write the letter as she wanted to “do something tangible, instead of just complaining.”

In the letter, she implores the Ford government to reconsider the new rules and asks that daycares at least be given access to at-home tests like elementary and high school students are being afforded. She asks the authorities to reverse or revise the decision so that young families like hers “don’t have to bear an unfair burden as we all adjust to counter this new wave.”

Aurelia Engstrom and her partner Eoin Harris are among thousand of parents who signed the petition inspired by Rho’s letter.

“I am asking for some level of consideration for these children who are under five — they are the only ones who cannot be vaccinated,” said Engstrom.

Along with PCR testing being reinstated for daycare settings, Rho and Engstrom both say they would like to see daycare workers provided with proper personal protective equipment as they work in close quarters with unmasked children and run the risk of being exposed daily.

“It’s horrifying how ignored this sector has been [from the beginning] despite it being part of the Ministry of Education’s portfolio,” said Engstrom.

Parents in an impossible situation

“The complete exclusion of children and workers in daycare, in my opinion, was completely unacceptable,” Rho said of the new rules.

“It’s a complete abdication of their responsibility to actually provide a safe place for our kids to go,” added Harris.

Rho says her daughter was born three weeks before the pandemic started and “that’s been her whole life.”

She says in the 10 months her child has been in daycare, she has been tested for COVID-19 11 times, as the already strict protocols dictated that every cough or sniffle warrants a test. Each time, her child had to stay home for up to three days before test results came back.

“This was happening typically every three to four weeks when she was in daycare because that’s just what happens to kids in daycare,” explained Rho. “That interruption on its own was extremely challenging for our family” prior to the latest guidelines.

Engstrom says their young daughter has been tested 14 times, but at the very least when PCR tests were available, they knew where they stood with regards to COVID-19.

“We knew what the score was — whether or not we were all going to get sick with COVID because she’s positive or it was just some sort of cold virus or flu. Now, we have no idea,” she said.

According to the new guidelines, parents will have to isolate at home along with their child for five days if any symptoms are exhibited — an entire work week.

“Every time this happens, our entire family can’t leave our condo for five days. It will just become impossible for work,” said Rho. “I’m in a very fortunate position to have a work-from-home job and it’s still impossible. There’s no way to do my job properly and also care for my child properly. My husband cannot always work from home, so he’s going to miss critical days at work.”

In addition, Rho says her daughter will miss out on the enrichment and socialization that she gets at daycare, which has largely been her only avenue for socialization since she was born.

“It attacks so many parts of our lives and just makes it really impossible to have a functional family where we’re all doing the things that we need in order to be productive and happy and healthy,” she said.

Harris and Engstrom both work from home and while they strive to split parenting duties while juggling virtual work meetings, they echo Rho’s sentiments.

“It’s like the longest days I have ever lived are the ones where she is home, isolating with us.”

Like Engstrom, Rho also says she has rarely, if ever, heard Premier Ford mention daycares or explain why the policies left out daycares in the numerous press conferences during the pandemic.

“We feel abandoned and left alone … [daycares] were just neglected they were never part of the conversation,” she said.

“When so much of the conversation revolves around keeping the economy going through this wave, [the government] is making it impossible for thousands upon thousands of workers to actually do their jobs and they’re not even addressing or mentioning it.”

Rho adds that she and her husband are both fully vaccinated, including booster shots. They feel that even though they have done everything they can to follow all protocols, the restrictions are more difficult to manage than ever before.

“There’s no alternative, there’s no workaround. It doesn’t matter what you’ve done — this is what’s happening now,” she said.

CityNews reached out to the Ontario government to ask if they are considering revising the PCR testing strategy for daycare settings but did not receive a response by publishing time.

Professor Sarah Kaplan, Director of the Institute for Gender and the Economy at the University of Toronto, says it’s been well documented that earlier waves of the pandemic led to women being ejected from the workforce in larger numbers as they’re often the primary caregivers for children.

“A lot of women simply couldn’t manage all of the responsibilities at home with the responsibilities at the job and that’s in part because of our gendered notions of who should be doing the care work at home — we have this assumption that it will be women,” explained Kaplan. “So women were then the ones who bore the brunt of handling the closures and reopening and reclosing of schools and daycares and the like.”

As a result, the rates of anxiety, depression and other mental health challenges are also seen to be higher in women than men throughout the pandemic.

Kaplan says despite the mass exodus of women from the workforce in the beginning of the pandemic, over the last six to seven months, women’s employment numbers have rebounded. Women under 55 are employed at the same or higher rates as they were prior to the pandemic.

However, Kaplan says women opted for more flexible jobs that may allow them to handle greater childcare responsibilities or turned down promotions because of them. She fears the new government guidance around PCR tests could be yet another set back.

“Not knowing whether your child is going to be able to be in care or not on any day of the week has created a tremendous amount of uncertainty which has led many people to just withdraw their children from care services,” she said, adding that several colleagues have done so. “The uncertainty was harder. At least now they can plan — they know their kid will be home and they can plan for it.”

In addition, Kaplan says the timing of this new set of guidelines and the resultant uncertainty could not be worse for the state of women’s employment, just as it was catching up.

“It could lead more people to just drop out permanently … because it’s just too stressful,” she said.

“I worry that this is going to be yet another blow to the long term career prospects for women in employment.”

Kaplan also says, when it comes to heterosexual couples, she is a staunch advocate of parental leave for both parents so that mom and dad can both bond with the child early on. This would ensure that the child does not become entirely dependent on the mother, as is often the case when the formative first year is spent with her on maternity leave — forcing her to give up work to prioritize the child’s needs instead of the father being able to take over.

She adds that in order to ensure women’s employment is more secure, employers need to be more understanding of men’s childcare responsibilities.

“One of the things we’ve found in our research is that employers understand that women have these household responsibilities. Maybe its derailing for their careers, but they at least make exceptions for them,” explained Kaplan. “Men are not often seen as having those responsibilities and therefore them taking time to care for their children is not understood or supported by their employers.”

“A lot has to change for us to be able to get to the point where men and women are sharing those responsibilities equally. That’s what we’re really going to need if women’s careers are not going to be set back by, yet again, another round of COVID-related challenges in the household.”