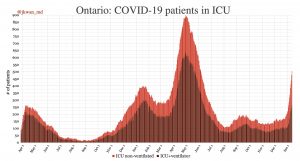 There are now 505 COVID-19 patients in the ICU with 265 of them currently on a ventilator. The rolling seven-day average of ICU admissions now sits at 411.

The province surpasses 500 ICU patients for the first time since early June. The 46 virus-related deaths is the most reported by the province during the Omicron wave.

Health officials are also reporting 3,448 people are now in the hospital for the virus, that compares to 3,220 reported one day ago.

The province advised on Tuesday they have updated their COVID-19 reporting to distinguish patients hospitalized for the virus and those admitted for other reasons.

Among ICU admissions with a known vaccination status, 49 per cent are not fully vaccinated. This compares to 11.5 per cent of Ontarians that have not received two doses.

As of Wednesday, 91.2 per cent of Ontarians 12 and older have at least one dose of a COVID-19 vaccine and 88.5 per cent are fully vaccinated. The province administered more than 159,000 vaccine doses in the last 24-hour period.

Officials announced Wednesday that more than five million booster doses have been administered provincewide. More than a third of Ontarians, 34.2 per cent, have received at least three doses.

Below is the number of new COVID-19 infections and tests in Ontario. Cases are likely much higher due to changes in testing strategy across the province. More information on these changes can be found here.

Ontario is also reporting 9,783 new COVID-19 cases but Public Health Ontario warns the number of infections is likely much higher due to the province’s testing capacity and accessibility.

Education minister Stephen Lecce and Dr. Kieran Moore will speak on Wednesday afternoon to update the province’s plan to have students return to in-person learning next week.

The press conference comes after the Ford government confirmed earlier this week that schools will reopen on Monday, Jan. 17 and the province updated back to school guidance on Tuesday that outlined testing protocols for students when they return to class.